How to say if the variable is significant looking only at "t value"?

I have the model:

Assuming we do not know the "p-value" I'm trying to analyse the significant variable looking only coeff. / std Err and t value.

I'm a bit confused as if I looked beta which has a p=0.1 (90% benchmark according to Gujarati) we can say if it is positively significant. The t of beta is 1.65 which I will take as the greatest value I can use.

I need to read these data without knowing "p_value". 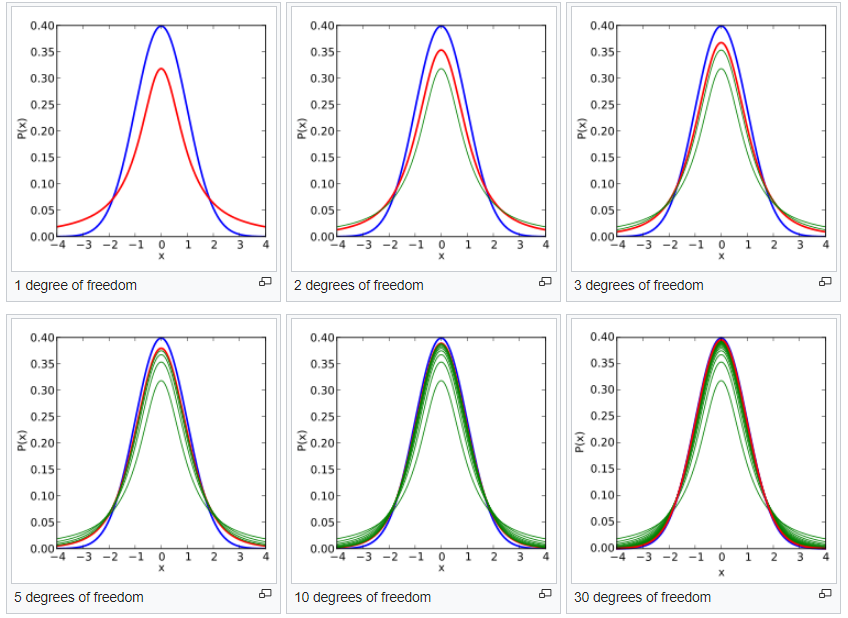 The obvious question is what in this context "large enough" means. I would say it simply depends on how exact you want this rule of thumb to be. But in your case with $n= 428$ this should be a reasonable rule of thumb.

When dealing with significance testing, you are deciding between two hypotheses

A beta coefficient is significant if you are able to reject the null hypothesis for a specified level of significance $\alpha$, that is usually chosen to be $0.05$.

Not the answer you're looking for? Browse other questions tagged statistical-significance interpretation stata or ask your own question.

30
Is rejecting the hypothesis using p-value equivalent to hypothesis not belonging to the confidence interval?
17
When doing a t-test for the significance of a regression coefficient, why is the number of degrees of freedom $n-p-1$?
4
How large does the sample size need for the t distribution to be approximately normal

1
The correct probability distribution / way to identify large deviations in a set of daily changes to portfolio value
4
Interpreting Reaction Time data with mixed-effects model
0
How to recognize whether the $t$ value is significant?
1
How to interpret coefficients which do not have the hypothesised sign but are also not statistically significant?
5
Linear model: only the whole model significant?
0
High t-val for one explanatory variable, while the other has a significant coefficient. How to interpret???
0
Only the intercept is significant in regression model (with dummy variable?)
3
Can a variable have a significant effect on an effect that is non-significant itself?