Why Discriminator converges to 1/2 in Generative Adversarial Networks?

Given this definition, I would expect it to converge to 1, i.e. thinking constantly that x is from the real training sample?

I'll try to skip math, and use intuition instead.

You show Discriminator a lot of examples. Some are real, some are fake (coming from the Generator).

Intuitively, you want Generator to be able to fool Discriminator every time into thinking that a fake example is a real one. It shouldn't be able to differentiate between real and fake examples.

You don't show it real examples exclusively for it to tell you that it's always a real one. You show it real examples 50% of the time. Other 50% of the time you show it fake examples. You want it to think that it's a real example when it really is. You also want it to think it's a fake when it really is. But, when the fakes are really good, it won't be able to tell a difference. It will classify some real examples as fake, and some fakes as real. There are two classes. On average, two classes have probability of 50% each, if they have the same number of samples. If everything's perfect, the best D can do is guess whether it's a fake or a real example it's been shown, which gives probability of 50%.

What would you say if I showed you two twin brothers, that you don't know, and asked you to tell me which one is which? The best you could do is guess. You could flip a coin, too, which is the same. If a GAN cannot differentiate, then it can only guess, because it knows there are two classes, and that further means we have trained our generator well.

On a large number of examples, if D can't differentiate between real and fake ones, your GAN has achieved a state of Nash equilibrium. It's a game that G and D play against each other, and we hope they reach the equilibrium at some point.

D is a common classifier. If it always outputs '1', for real examples, then P('1') = 1. If it always outputs '0', for fake examples, then P('0') = 1, or, P('1') = 0. So, either your G is really bad, or D is somehow broken. In the beginning, D will be able to differentiate between real and fake examples more easily. But you want to train your G to produce better examples. At the same time, you also train your D to be able to recognize fakes more accurately. You want your GAN to achieve the state of equilibrium, when neither player can improve.

{1} gives some proof of that claim, but intuitively you can consider Algorithm 1's weight update strategy: 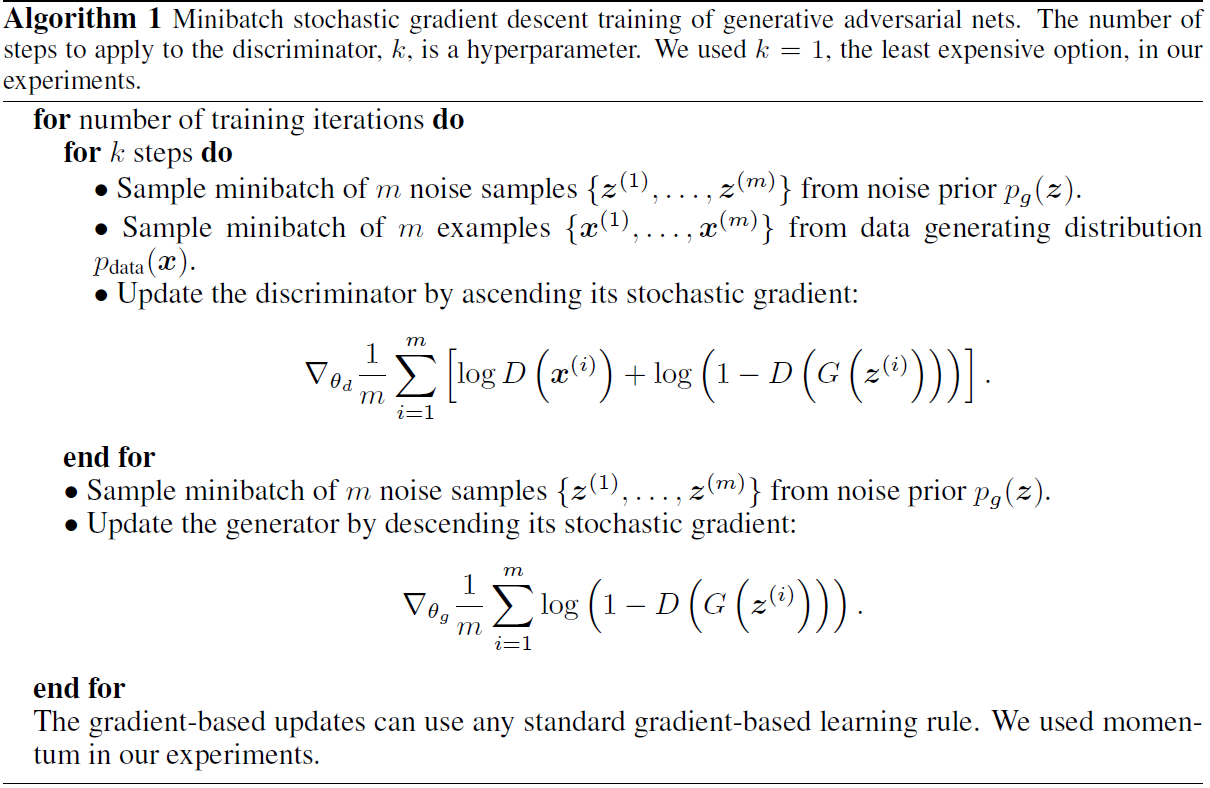 If $p_g=p_d$ the input data $x_1,...,x_n\sim p_d$ and the generated data $G(z_1),...,G(z_n)\sim p_g$ come from the same distribution. It is thus impossible to distinguish between samples of real and generated data because they are samples of the same distribution. The best the discriminator can do is thus guessing if $x$ was generated or real. For the discriminator guessing corresponds to $D(x)=1/2$, that is, the probability of $x$ being real is $1/2$. Note this also makes the probability of $x$ being generated $1/2$.

More formally, this follows directly from [1]'s Proposition 1. It says that for any fixed generator $G$ the optimal discriminator is

In other words. If the generator recovers the real data distribution, the optimal discriminator blindly guess

for fixed $G$. This can be done by rewriting $V(D, G)$ a bit, then differentiating with respect to $D$ and solving for 0. This is the rough idea, however, to make the details work one needs to be a little bit more careful. Check out [1]'s proof if you want to see the details.

Not the answer you're looking for? Browse other questions tagged machine-learning neural-networks deep-learning gan or ask your own question.

0
proof of For $G$ fixed, the optimal discriminator $D$