I noticed that this learning rule is different from the one in Neal's paper. Why is that?

Last question, is the difficulty of learning sigmoid belief nets due to the posterior $p_i$ in the learning rule?

machine-learning bayesian-network deep-belief-networks
Share
Improve this question
edited May 10 '17 at 10:50

I was looking around for some similar explanations and I believe I can help with this question.

What you think a mismatch is actually the same formula with a more general scope. Let us say our target unit is

and using the sigmoid function we define the probability of this target unit given the status of the hidden units. Thus, the evaluation of sigmoid(

And as you explain the result would be

However if you were asked to compute the derivative of the probability that the target unit is switched off, you would use 1-sigmoid(

Now the result is

. Now these two different derivaties correspond to the target unit

taking the values 1 and 0 respectively so both expressions can be summarised as:

Now to generalise here you can find some more theoretical details: 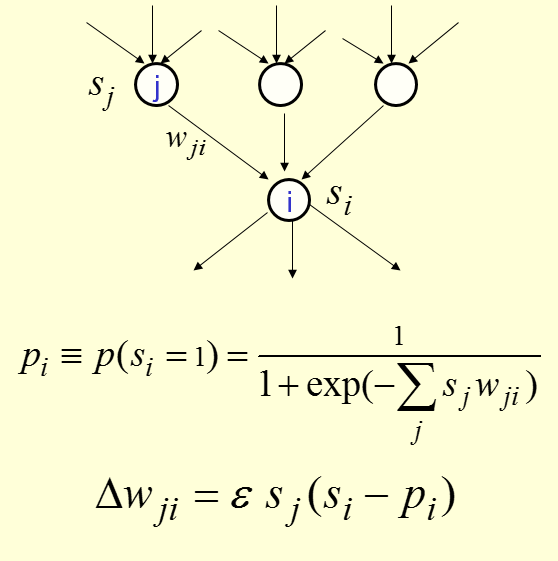 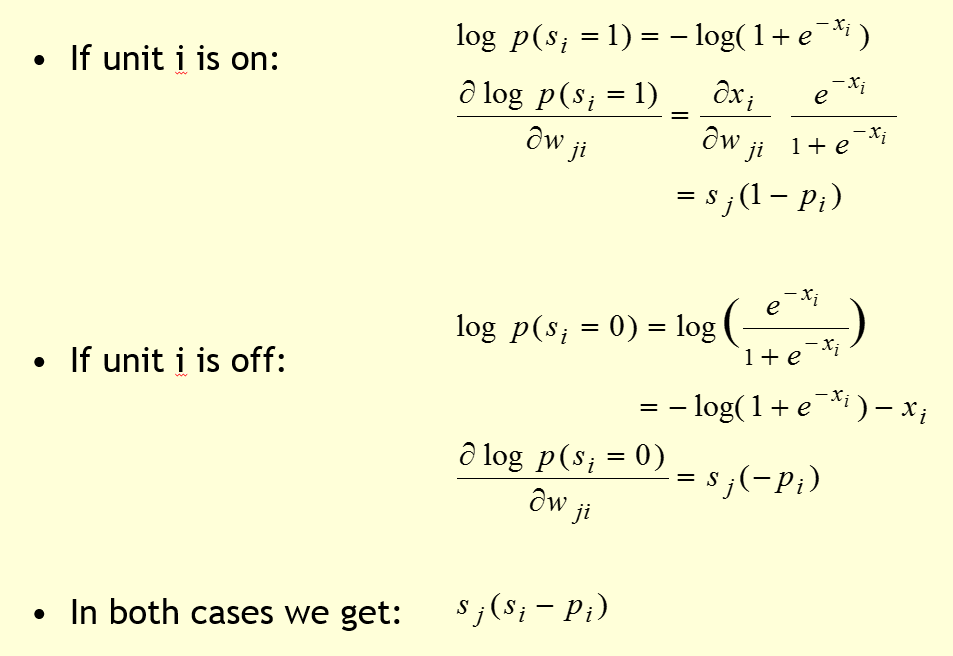 Regarding the paper from Neal's the formulation is the same, the only difference is that here we have made use of the following calculation for the sigmoid function derivative:

And finally to the last question I believe the difficulty lies in the fact that it is typically hard to compute the posterior distribution over all possible configurations of hidden causes. It is also hard to compute the probability of an observed vector and hence the definition of methods to train the network that rely on an estimation of the distribution combined with either minimising the energy of observed states on the generative model or approximations to MAP learning.

Not the answer you're looking for? Browse other questions tagged machine-learning bayesian-network deep-belief-networks or ask your own question.

2
Chain rule for Bayesian Networks
8
What is the relation between belief networks and Bayesian networks?
3
Expected value of error in neural network
4
Why does the determinant of the Hessian grow with n?
1
Approximation of Δoutput in context of Sigmoid function
0
Are there useful applications for Bayes Nets (vs. Naive Bayes)?
1
How do we generate the samples of hidden root nodes in the Bayes network (Sigmoid Belief Networks) of a generative model