I have long-term collection data, and I'd like to test, whether the number of animals collected is influenced by weather effects. My model looks like below:

Explanation of the used variables: 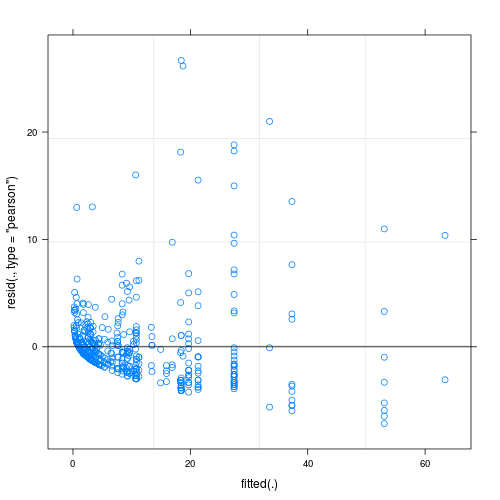 My main question is: is this a problem making the reliability of my model questionable? If so, what can I do to resolve it?

So far I have tried the followings: 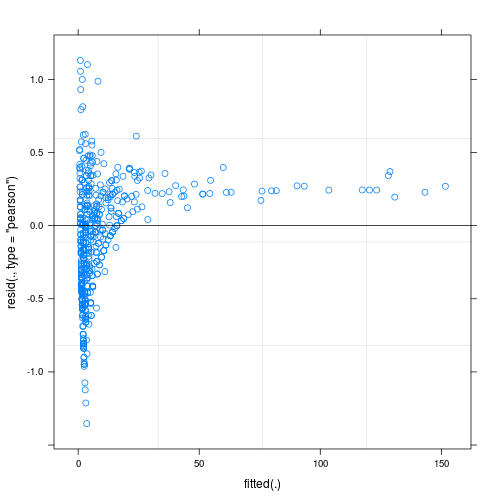 As far as I know, there might be ways for the estimation of heteroscedasticity-consistent standard errors, but I have failed to find any such method for Poisson (or any other kind of) GLMMs in R.

In response to @FlorianHartig: the number of observations in my dataset is N=554, I think this is a fair obs. number for such a model, but of course, the more the merrier. I post two figures, first of which is the DHARMa scaled residual plot (suggested by Florian) of the main model. 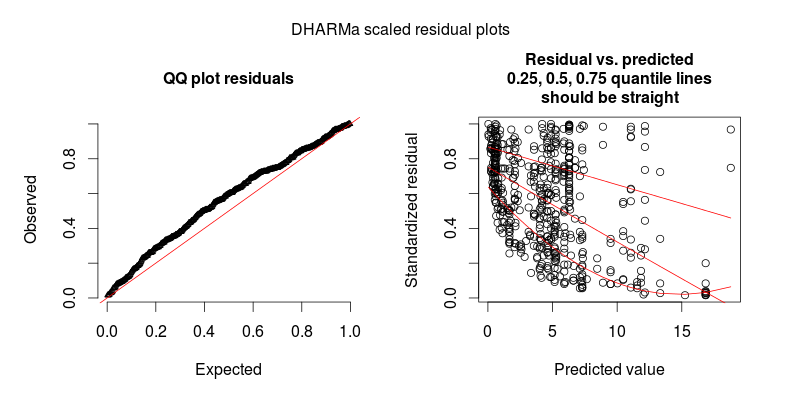 The second figure is from a second model, in which the only difference is that it contains the observation-level random effect (the first does not). 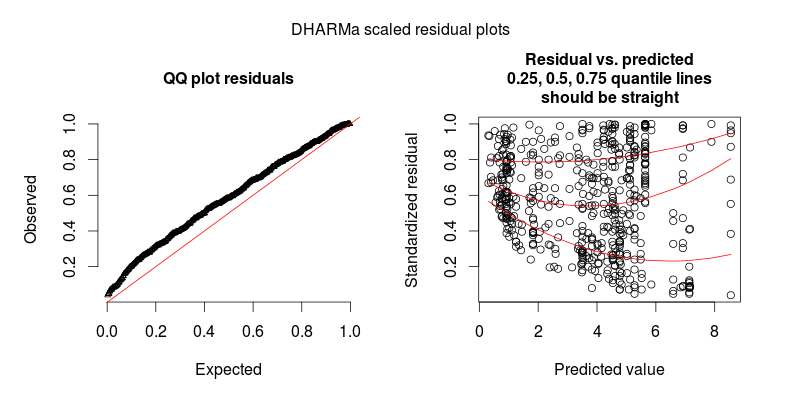 Figure of the relationship between a weather-variable (as predictor, i.e. x-axis) and sampling success (response): 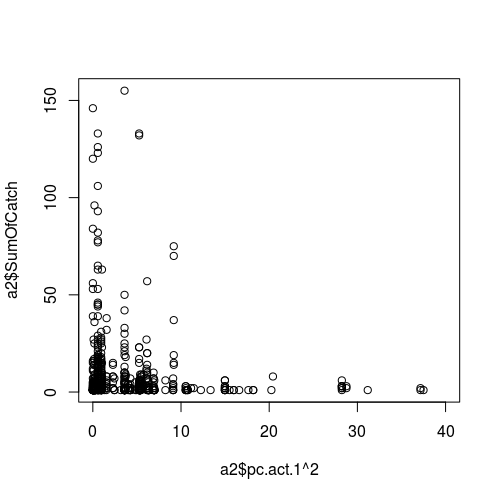 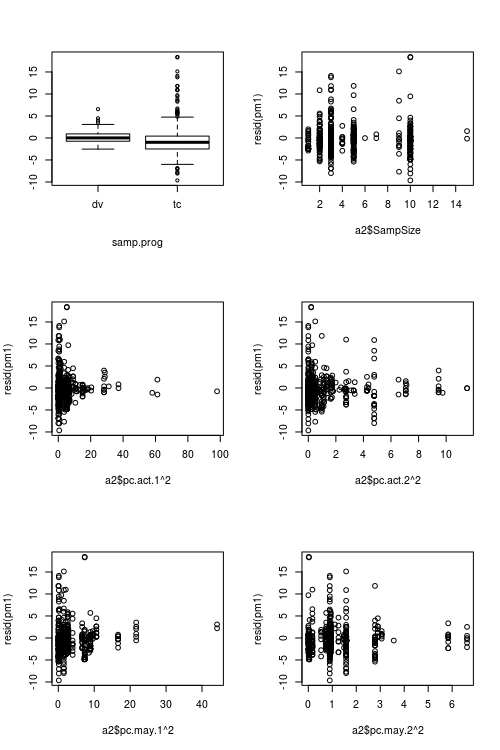 It is difficult to assess the fit of the Poisson (or any other integer-valued GLM for that matter) with Pearson or deviance residuals, because also a perfectly fitting Poisson GLMM will exhibit inhomogeneous deviance residuals.

This is especially so if you do GLMMs with observation-level REs, because the dispersion created by OL-REs is not considered by the Pearson residuals.

To demonstrate the issue, the following code creates overdispersed Poisson data, that is then fitted with a perfect model. The Pearson residuals look very much like your plot - hence, it may be that there is no problem at all.

This problem is solved by the DHARMa R package, which simulates from the fitted model to transform the residuals of any GL(M)M into a standardized space. Once this is done, you can visually assess / test residual problems, such as deviations from the distribution, residual dependency on a predictor, heteroskedasticity or autocorrelation in the normal way. See the package vignette for worked-through examples. You can see in the lower plot that the same model now looks fine, as it should.

If you still see heteroscedasticity after plotting with DHARMa, you will have to model dispersion as a function of something, which is not a big problem, but would likely require you to move to JAGs or another Bayesian software. 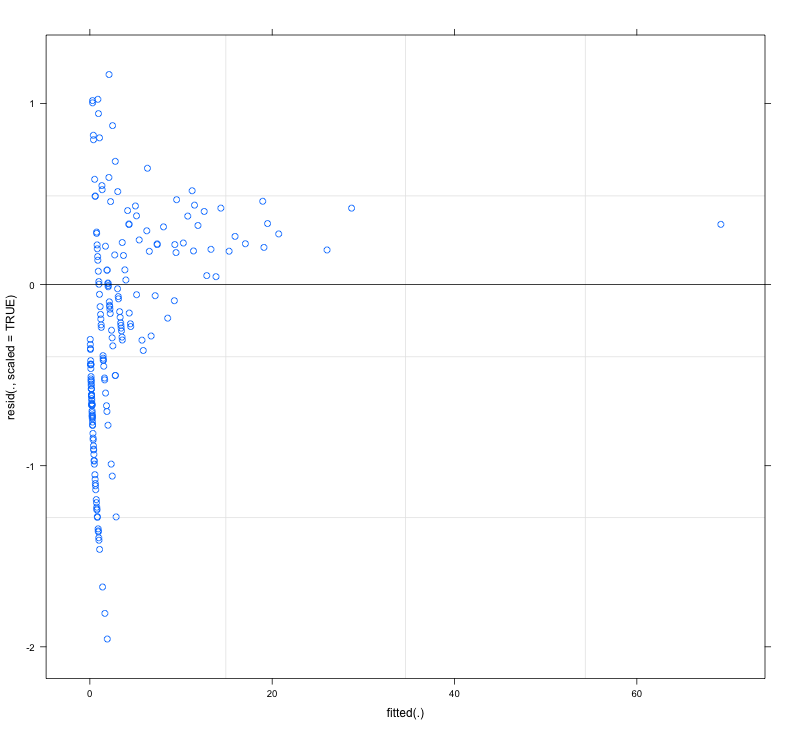 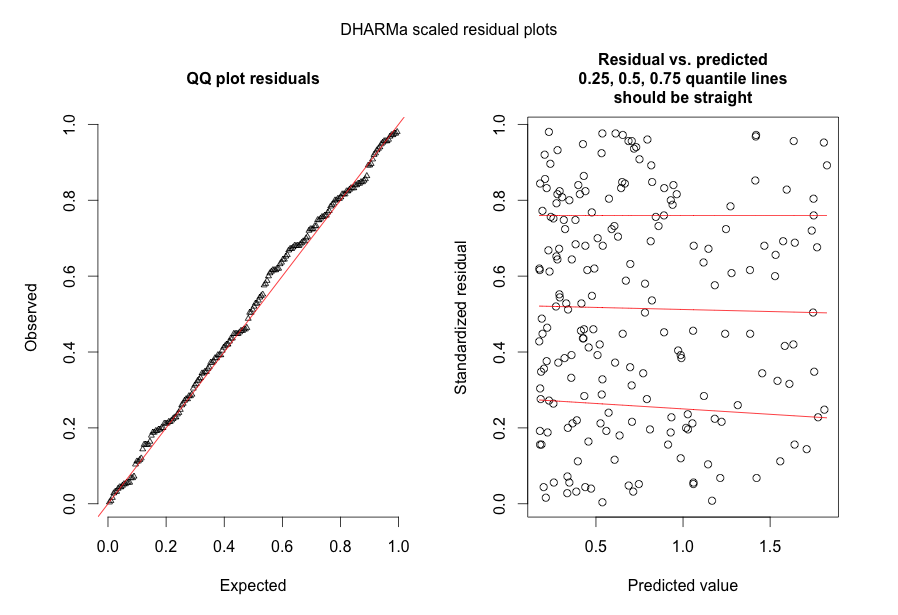 Not the answer you're looking for? Browse other questions tagged r poisson-distribution heteroscedasticity glmm or ask your own question.

4
Why is Poisson regression different with glmer and gamlss?
3
Question about application of GLMM with Poisson
7
Should random effects be included in fitted values when making a binned residual plot for a binomial GLMM?
4
Adding an observation level random term messes up residuals vs fitted plot. Why?
1
Question about GLMM in R