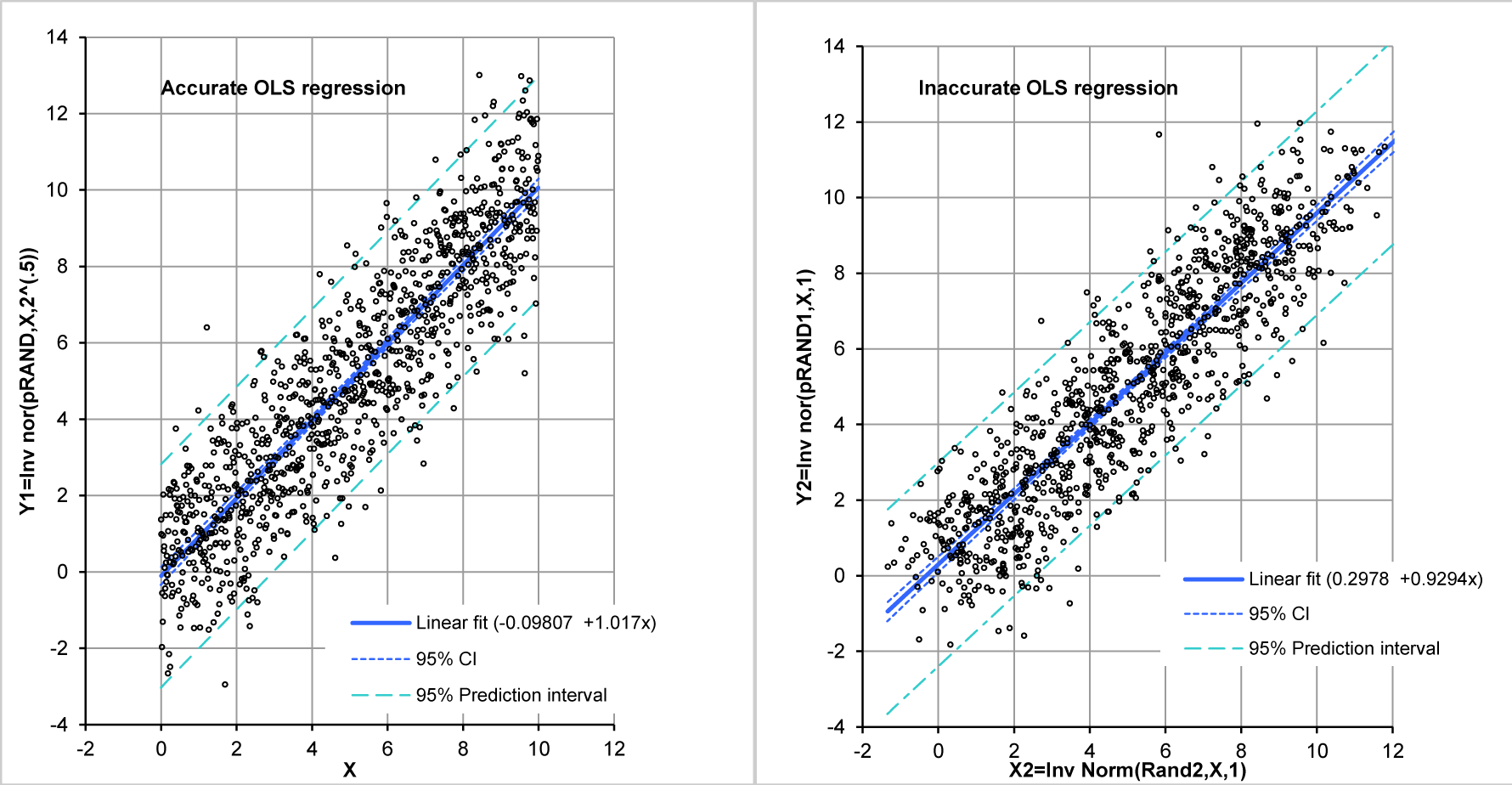 This gives us the following regression parameters for the accurate regression

And for the inaccurate regression we obtain,

This time we see that the OLS fit does not return a slope of 1, or an intercept of 0. I call this OLS inaccuracy, what do you call it? 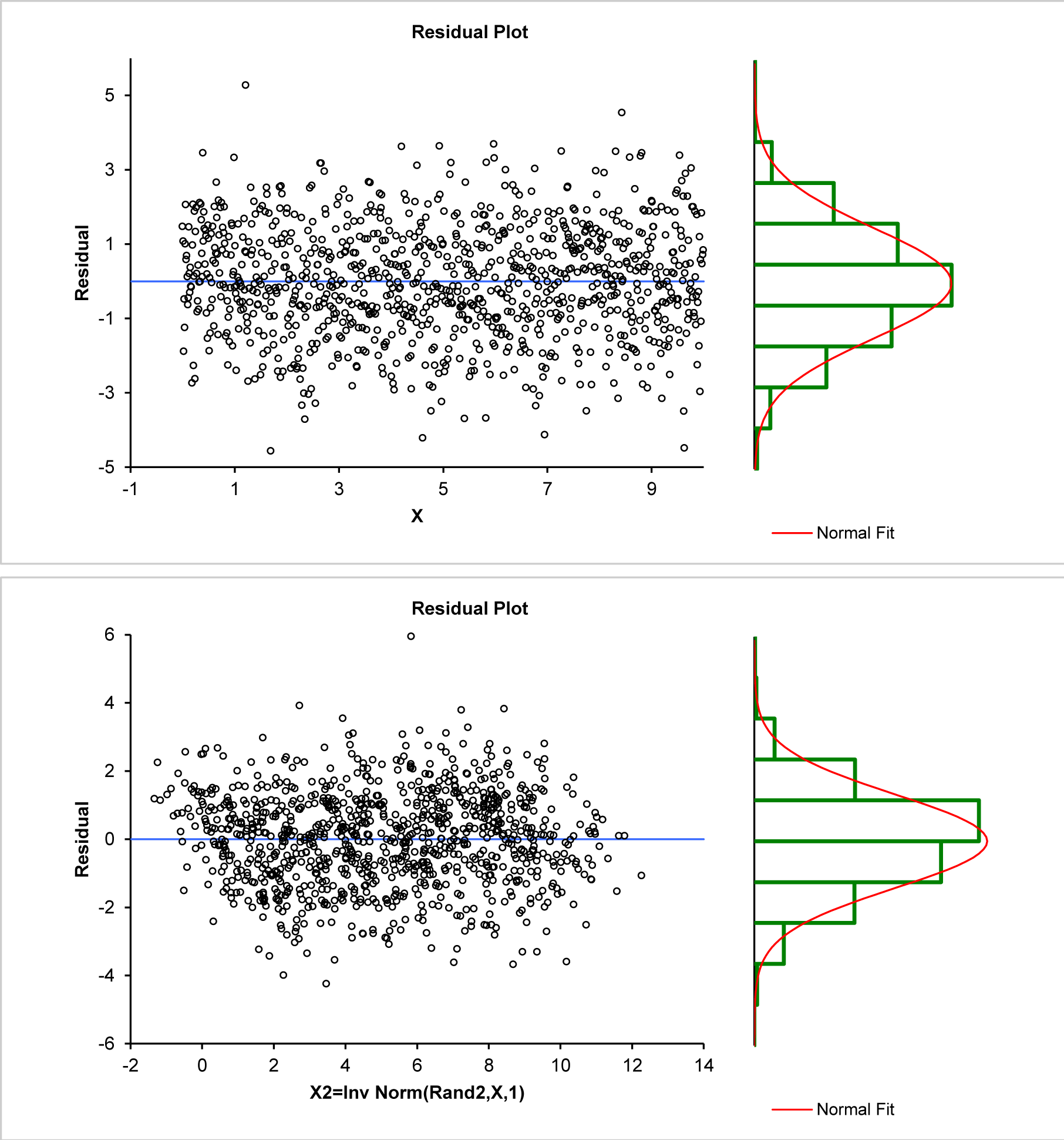 The first image above has a rectangular normal distribution residual pattern suggesting a not inaccurate regression. The lower image has a parallelogram structure and a skewed non-normal residual pattern, this is what I called latent information suggesting inaccuracy. Numerically, both mean residuals are near zero ($-2.33924*10^{-16}$, $-3.37952*10^{-16}$), but when normal distributions are (BIC) fit to these residuals the first remains accurate with mean $-2.33924*10^{-16}$ and standard deviation $1.4834$, but the second is a shifted, more borderline normal with mean $0.0879176$ and standard deviation $1.38753$.

Q1: How do we quantify the systemic inaccuracy, shown as an example here, in mathematical form when OLS regression is applied to bivariate data?

@Tim below spent a long time discussing what is and is not bias, that there is or is not a problem, that OLS is wrong or not (it is the wrong tool for bivariate data), etc. His efforts are appreciated, however, that material is extraneous to the original intent of the question and has been deleted.

Initially, before the massive edits, your question was asking about the definition of bias. Quoting my other answer

is also a random variable. We define bias as

estimator is unbiased when $\mathbb{E}_\theta(\hat\theta_n) = \theta$.

This is the definition of bias in statistics (it is the one mentioned in bias-variance tradeoff). As you and others noted, people use the term "bias" for many different things, for example, we have sampling bias and bias nodes in neural networks (or described in here) in the area of machine learning, while outside statistics there are cognitive biases, you mentioned bias in electrical engineering etc. However if you are looking for some deeper philosophical connection between those concepts, then I'm afraid that you are looking too far.

Regarding "bias" shown on your examples

TLDR; Models you compare may not illustrate what you wanted to show and may be misleading. They illustrate the omitted-variable bias, rather then some kind of OLS bias in general.

Your first example is a handbook example of linear regression model

where $Y$ is a random variable and $X$ is fixed. In your second example you use

so both $X$ and $Y$ are both random variables that are conditionally independent given $Z$. You want to model relationship between $Y$ and $X$. You seem to expect to see slope equal to unity as if $Y$ depended on $X$ what is not true by design of your example. To convince yourself, take a closer look at your model. Below I simulate similar data as yours, with the difference that $Z$ is uniformly distributed since for me it seems more realistic then using deterministic variable (it also will make things easier later on), so the model becomes

On the plot below you can see simulated data. On the first plot we see values of $X$ vs $Z$; on the second one $Y$ vs $Z$; on third $X$ vs $Y$ with fitted regression line; and on the final plot values of $X$ vs residuals from the described regression model (similar pattern to yours). Dependence of $X$ and $Y$ to $Z$ is obvious, the dependence of $X$ to $Y$ is illusory given the variable $Z$ that they both depend on. We call this an omitted-variable bias. 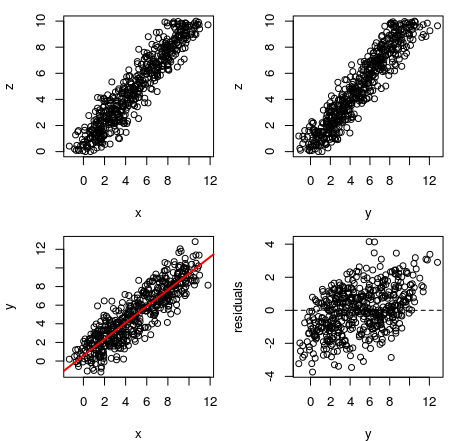 This will be even more clear if we look at the regression results:

and compare them to results of model that includes $Z$:

In the first case we see strong and significant slope for $X$ and $R^2 = 0.79$ (nice!). Notice however what happens if we add $Z$ to our model: slope for $X$ diminishes almost to zero and becomes insignificant, while slope for $Z$ is large and significant, $R^2$ increases to $0.89$. This shows us that it was $Z$ that "caused" the relationship between $X$ and $Y$ since controlling it "takes out" all the $X$'s influence.

Moreover, notice that, intentionally or not, you have chosen such parameters for $Z$ that make it's influence harder to notice at first sight. If you used, for example, $\mathcal{U}(0,1)$, then the residual pattern would be much more striking. 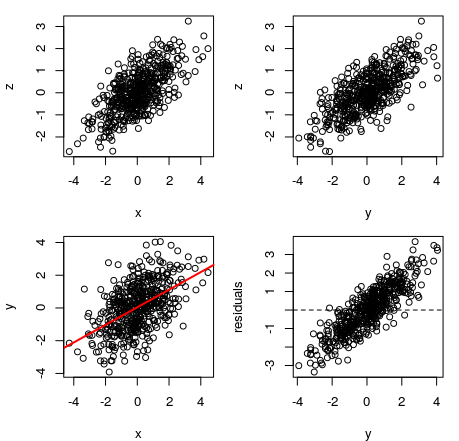 In each case $Y$ depended on $Z$ and it's relationship with $X$ was illusory and caused by the fact that they both depend on $Z$. This is an important problem in statistics, but it is not caused by any pitfalls of OLS regression, or our inability to measure bias, but by using a misspecified model that does not consider some important variable.

Coca-cola adverts do not cause snow to fall and do not make people give each other presents, those things just happen together on Christmas. It would be wrong to model snowfall predicted by the screenings of Coca-cola adverts while ignoring the fact that they both happen on December.

Sidenote: I guess that what you might have been thinking of is a random design regression (or random regression; e.g. Hsu et al, 2011, An analysis of random design linear regression) but I do not think that the example you provided is relevant for discussing it.

The answer to this is well known. It is often called regression dilution and has been nicely presented elsewhere on this site. The concept of bias in this context is not as ridiculous as is made out to be here, for example, Thompson by Longford (2001) refers the reader to other methods, expanding the regression model to acknowledge the variability in the $x$ variable, so that no bias arises$^1$.

Not the answer you're looking for? Browse other questions tagged regression least-squares terminology accuracy or ask your own question.