I have been looking at variational inference, however I came across a problem I have a hard time to understand how to start with it.

Now it want to express the joint probability. However now I get confused which variables should be included. According to the Wikipedia page (section "In practice") they seem to only include the hidden variables of interest and the observed data, i.e. the joint becomes:

However, later on (in "A more complex example"), the seem to include all the stochastic variables and the observed data, i.e:

I was wondering which joint probability is correct to use in this model?

This answer may start a bit too far 'at the beginning', but you can see from which point onwards I start talking about things that are new to you.

In Bayesian statistics $\mu_n$ and $\tau_k$ are called priors for $X_n$ and $Y_k$ respectively. The priors themselves have priors too, they are called hyper-priors (here $\sigma'$, $\mu'$, $\tau'$ and $\lambda'$). All hyper-priors are constants here. According to the problem statement $\sigma_n$ and $\lambda_k$ may be treated as deterministic as well. 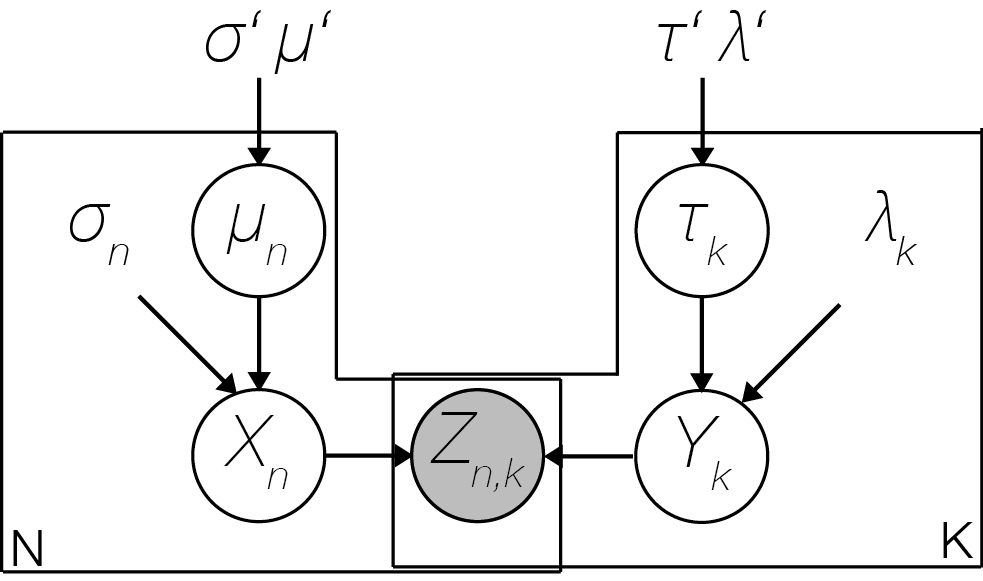 The circled entities are random variables, whereas the others are deterministic. With the help of the graphical model, the joint probability is:

The last equality follows, by the fact that when $X_n$ and $Y_k$ are known, $Z_{n,k}$ is not a random variable anymore. Therefore, we can say that the joint probability here is also the probability distribution of $Z_{n,k}$.

As far as I know (see here for details), the product of Gaussian variables does not result in another Gaussian or something else that's easy to work with (i.e. they are not conjugate priors). Therefore, I think this expression is the most appropriate representation of the joint probability.

Not the answer you're looking for? Browse other questions tagged machine-learning mathematical-statistics variational-bayes or ask your own question.

12
Estimating parameters for a binomial
3
Applying variational inference to this model
2
sequential/recursive/online calculation of sample covariance matrix
2
Why does conditional expectation have this property for independent random variables?
0
Generating data from the posterior distribution