How to correct for order bias in responses to psychometrics questions?

I'm looking at the data from Individual Aesthetic Preferences for Faces Are Shaped Mostly by Environments, Not Genes by Germine et. al., where members of twin pairs were presented faces in an order and asked to rate them. The data has rows corresponding to raters and the columns to faces. The subset that I focus on below is available here.

I'm attempting to do dimensionality on the data to determine the dimensions on which the faces vary as far as ratings are concerned. After normalizing for average attractiveness rating given to each face, I find that most of the covariance is coming from correlations between ratings of faces that were presented near by one another, as in the matrix below, where there are positive correlations near the diagonal and negative correlations if one moves some ways from the diagonal: 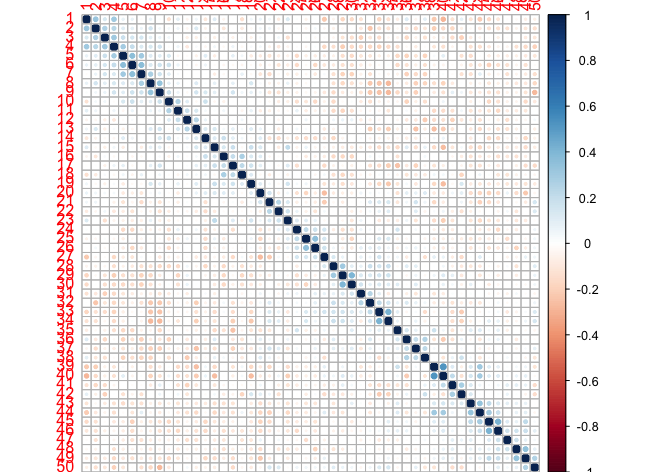 Autoregressive integrated moving average time series forecasting seems relevant here, but I'm unclear about how to implement it appropriately in this context. I tried what Zach suggested in response to the question Estimating same model over multiple time series, namely to convert the data to a single time series and use auto.arima from the "forecast" library:

but I found that doing this purged the data of all correlations, whereas I just want to strip out the correlations due to order effects.

Any suggestions would be much appreciated!

If you want to correct for the effect that's mostly picked up by the first principal component, then regress the original data on the first PC (the first PC is a single variable that consists of n=50 "principal component scores" associated with the major eigenvalue). If you want to recreate a new artificial dataset without the effect then you have to run multivariate linear regression for which the multiple y-variables are based on any original variables you want to remove the effect from in your dataset, and the single x-variable to regress the y-variables on is the first PC. Next, get the residuals (y-values minus the predicted y-values called "y-hats") for each of the y-variables, and they will not have the effect. Call the residuals your new dataset without the effect.

FYI-your identical twins need to be older, because twins live in the same household till grown up -- their environments only change after they have grown up, moved on in life and go their own way (i.e., different environments). Thus, if your twins are all young (<20), then they have not lived on their own for a considerable period of time in different environments. It looks like they both vote very close throughout all the n=50 pairs, since the data load mostly on the diagonal of the matrix. It would be interesting to see if there are any patterns on the discordant votes (orange in the off-diagonal matrix elements?). That is, was there anything different about the images for which votes agreed and disagreed? Probably look at hair color, eye color, race, skin color/tone, facial patterns (eyebrows, lips, nose, etc.).

There will never be a genetic difference between identical twins (obviously) since they share 100 of their genes (100% of the time).

Not the answer you're looking for? Browse other questions tagged time-series autocorrelation autoregressive psychometrics moving-average or ask your own question.

2
How does I bias my standard errors estimates when I forget to correct for autocorrelation of errors?
9
Multiple ARIMA models fit data well. How to determine order? Correct approach?
1
Backward elimination for choosing the AR order
24
How does ACF & PACF identify the order of MA and AR terms?
0
What is the correct model (AR, MA, or ARMA) and order for the data?
1
Should a moving average be applied to time series data before performing a linear regression?
0
How should you determine the order of an AR(p) model using PACF with fluctuating significance?