I am using bivariate normal distributions as an example.

Using independence_test() in R, I can tell if two bivarate distributions have different means. The null hypothesis that their means are the same is rejected in the example below.

However, I don't know how to construct a multivariate test to tell if two bivariate distributions have different covariance/correlations. 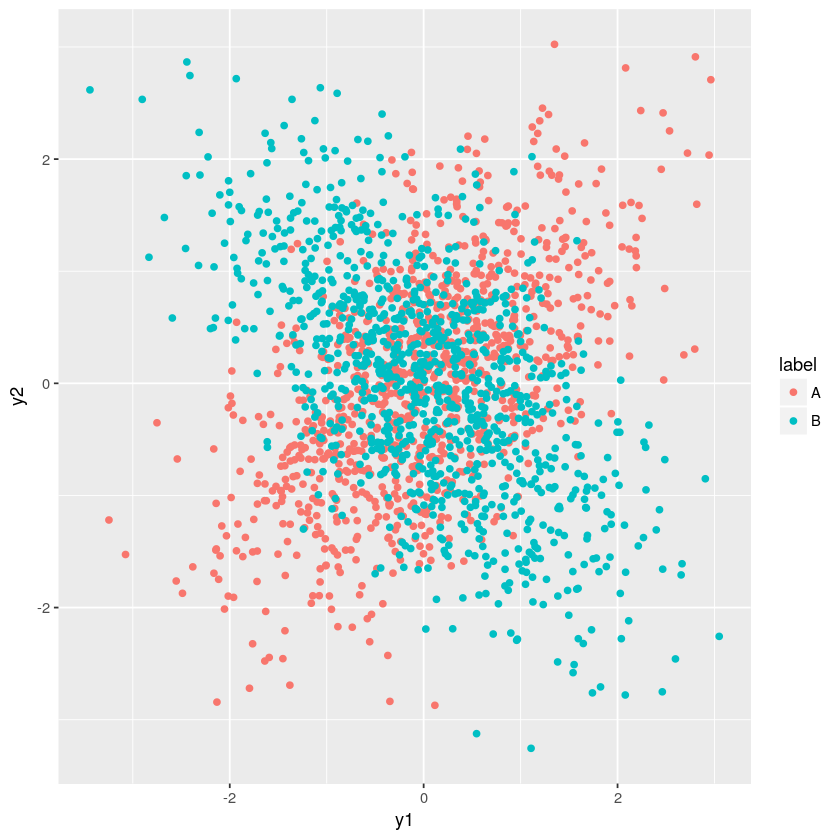 The best I can do so far is to propose the following: We run the following 3 univariate tests. Two distributions are deemed the same if all tests pass, because their first and second moments are the same.

There are various questions here which are related but which can be answered almost independently:

One simple idea for this is to use some transformation of the data so that mean differences on that transformed scale correspond to correlation differences in the original data. A straightforward transformation would be $r_i = (y_{1, i} - \bar y_1)/s_1 \cdot (y_{2, i} - \bar y_2)/s_2$ because up to degrees-of-freedom adjustments the correlation corresponds to the mean of $r_i$.

Using your data-generating process and a standard parametric 2-sample $t$-test we can do:

Note that the means in the two groups almost exactly recover the true simulated correlations. Not surprisingly, the result is highly signiciant.

If you want to use a robust version of this test you could compute r based on rank(y1) and rank(y2). This would then correspond to a Spearman correlation (up to degrees-of-freedom adjustments).

If you don't trust the central limit theorem in this test you can, of course, approximate the corresponding permutation test using coin.

However, in this situation the normal approximation appears to be working perfectly well.

To test for scale differences you can, in principle, also compute analogous transformations, e.g., $s_{1, i} = (y_{1, i} - \bar y_1)^2$, so that the corresponding mean yields the variance (up to degrees-of-freedom adjustments). Alternatively, one could again use a rank-based version of this transformation which is what the Mood test does.

And analogously for s2.

If you want to test for differences in all five directions (two locations, two scales, one correlation), one simple approach would be to conduct each test and reject if the maximum $t$ or $z$ statistic is large. The $p$-values or critical values should be Bonferroni-adjusted to account for five separate tests being conducted.

You can do this "by hand" using any tests of your choice. In coin you can also conduct these in one go using the default teststat = "maximum":

Note that this yields the correlation statistic from above as the maximum test statistic. You have also access to the five separate $z$ statistics:

which clearly shows that the correlation differences are the reason for rejection here.

Roll your own independence_test interface

Instead of computing these transformations "by hand" and then running a test for location differences on them, you can also define your own transformation function and pass that along to independence_test. This is what all the interfaces like wilcox_test or mood_test in coin do. The underlying ideas are shown in vignette("LegoCondInf", package = "coin") while the computational tools are discussed in more detail in vignette("coin_implementation", package = "coin").

Not the answer you're looking for? Browse other questions tagged multivariate-analysis permutation-test or ask your own question.