Ask Question
Asked 3 years, 8 months ago
Active 3 years, 7 months ago
Viewed 108 times
0
$\begingroup$
This question already has answers here:
Is there a difference between 'controlling for' and 'ignoring' other variables in multiple regression? (2 answers)
Closed 3 years ago.

I'm currently running a Cox proportional hazards analysis on my data to look at outcomes for cancer survival. I'm looking at variables such as cancer type, martial status, gender etc. For some reason when I put in all of these variables together in the SPSS model, I get different hazard ratios than when I put them in separately. Does anyone who know is the reason for this? Am I missing something basic?

As with any type of regression, using multiple explanatory variables has several advantages over simple (single-var) models, besides being able to see them all together. Chief among these is the concept of control. When a single variable ($x$) is used, the coefficient is the effect (relationship, hazard ratio etc..) on the dependent variable ($y$). But relationships between two variables can be more complex than they appear. The relationship can be augmented by the existence of other variables ($x_i$), and this can be modeled and discovered using multiple covariates in the same model.

An a known, if silly example, a relationship between ice-cream sale and murder-rate is high (i.e. the coefficient is highly significant). This, however, is obviously bogus. There is a secondary variable that is in play here - weather. Hot weather increases both murders and ice-cream sales. In this case, weather is a confounder to the relationship between ice-cream sales and murder rates. For an overview of different types of such external influences (confounders, mediators, moderators).

So, using extra variables in the model can often reveal the true relationships between a certain $x$ and a $y$. If, in a simple model, the coefficient of $x_1$ was $\beta_1$ and adding a second variable $x_2$ caused $\beta_1$ to increase in size (in absolute value), than the newly added $x_2$ is the reason for that change, and is likely moderating the relationship. If $\beta_1$ decreased (in absolute value), than $x_2$ is likely a confounder or a mediator.

As a more visual example of this, I'll use a part of an answer I gave to a different question: Following are two linear regression models (same idea applies to Cox PH) - the first with one explanatory variable (number of friends) used to predict happiness:

The second is the same model, with an added country (japan or china): 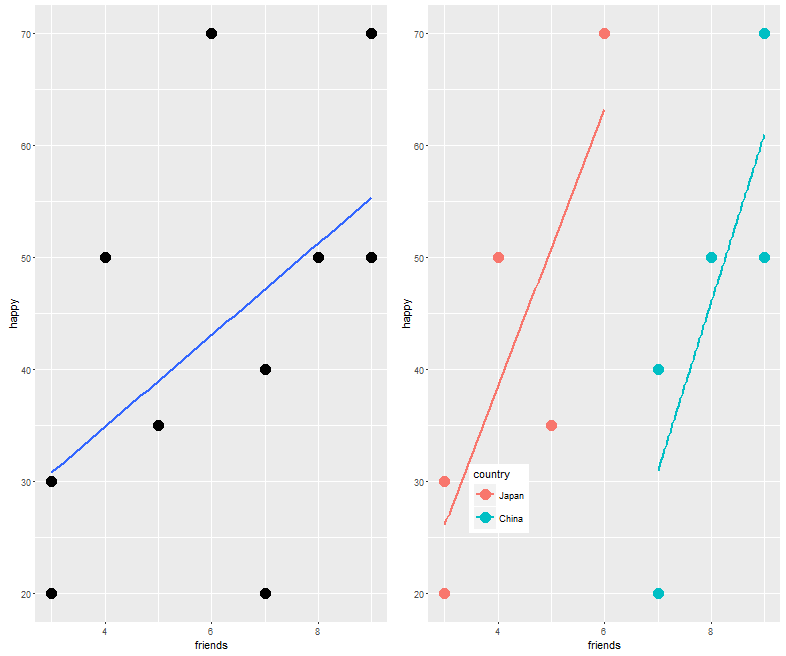 When controlling for country, the effect ($\beta_{friends}$) grew.

At any rate, it is very common for coefficients to change when adding related variables to the model. Do not worry, your model is likely better off.

Not the answer you're looking for? Browse other questions tagged spss cox-model or ask your own question.

54
Is there a difference between 'controlling for' and 'ignoring' other variables in multiple regression?
4
Linear regression coefficient's increase meaning