Trying to understand the fitted vs residual plot? [duplicate] 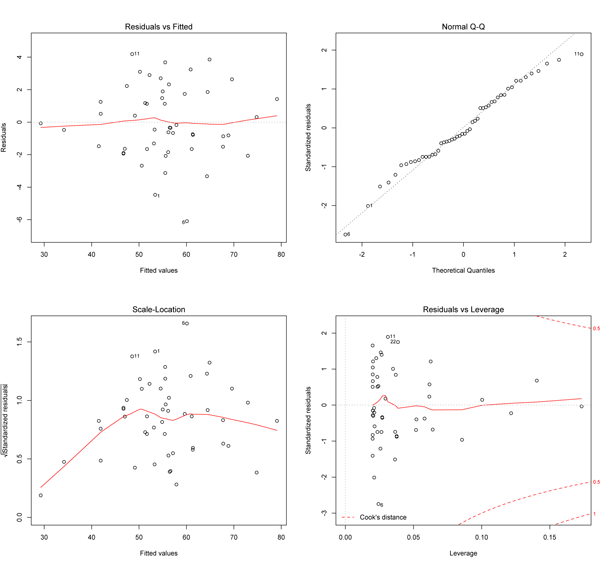 A good residual vs fitted plot has three characteristics:

So the second point deals with homoscedasticity?

According to the discussion in Draper and Smith's Applied Regression Analysis (3rd edition, roughly page 59), this residual plot may be used to check for violations in model assumptions particularly related to incorrect specification or presence of heteroscedasticity. 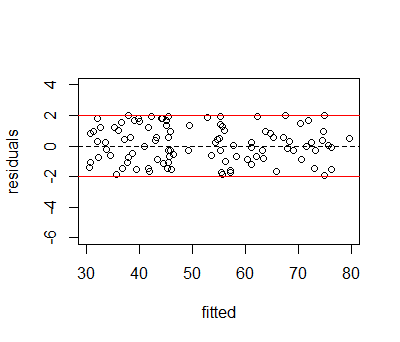 Notice that the residuals are randomly distributed within within the red horizontal lines, forming a horizontal band along the fitted values. There is no visible pattern, which indicates that our regression model specifies an adequate relationship between the outcome, $Y$ and the covariates, $X$.

A figure depicting a potential violation in the model assumptions is 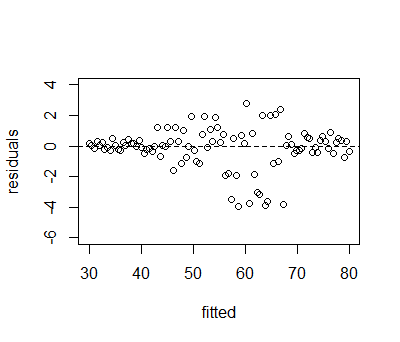 The first plot here repeats the ideal scenario, where the regression specification, $Y = \beta_0 + \beta_1 X + \epsilon$, adequately models the underlying relationship. In this instance, the fitted versus residual plot is 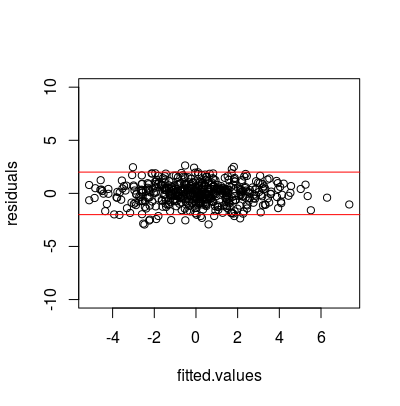 where the horizontal red lines are drawn at +- 2. As in the first figure, the points more or less lie in this horizontal band and no residuals are larger than 3 in magnitude (max(abs(regs[[1]]$residuals)) returns 2.932835).

In the second example, the outcome variable has a quadratic relationship with its covariate, $Y = \beta_0 + \beta_1 X + \beta_2 X^2$, but the regression specification only allows for a linear relationship. Here, the fitted versus residual plot shows a fairly strong sign of non-linearity with an upside down "U" shape. This is because the second order term of $X$ has a negative relationship with $Y$. 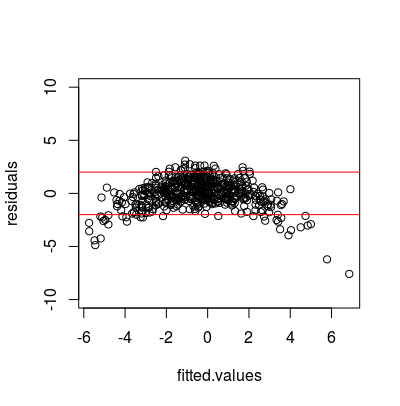 The third example provides an instance where $\ln Y$ has a linear relationship with X, with $Y = \exp{(\beta_0 + \beta_1 * x + \epsilon)}$ but the model fails account for the needed transformation of $Y$. 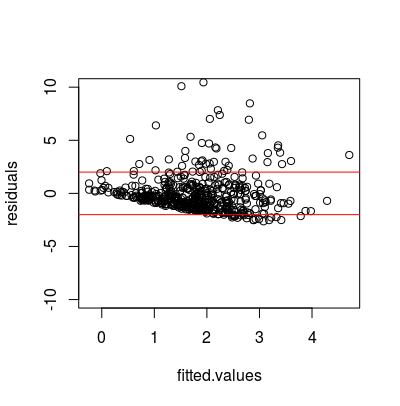 Here, the figure indicates a negative trend that isn't accounted for perhaps a bit of a funnel shape indicating heteroscedasticity. Further, there are larger numbers of residuals with extreme values, with 31 out of 500 values larger than 3 and four outside of the plot window, with values of roughly (10.1, 10.5 16.4, and 18.2). This relates to the non-normal error example in @glenn-b's answer to the question linked by @gung above.

To follow up on @mdewey's answer and disagree mildly with @jjet's: the scale-location plot in the lower left is best for evaluating homo/heteroscedasticity. Two reasons:

If you are looking at the top left plot then yes. However the best plot for what you intend is the bottom left one which folds the residuals about the horizontal axis in the first one so that the smoothed line drawn on that plot should be horizontal if there is no relation between scale and location. In your case it looks not too bad as the left hand dip is probably only being driven by a couple of points.

The second point is best evaluated using the top-left plot. Basically, you want to check to see whether the spread of the residuals is the same at all points along the x-axis. If it is, then you'll see a band of points that move horizontally along the x-axis. This would then suggest little evidence of heteroscedasticity. If instead it appears that the points either increase or decrease as you go from right to left, then you might say that "the band of points is increasing/decreasing" rather than staying strictly horizontal. The notion of a "band" of points is really just referring to the overall subjective shape of the scatterplot rather than anything specific.

Not the answer you're looking for? Browse other questions tagged regression residuals or ask your own question.

7
What does this residuals versus fitted plot mean about my model?
41
Interpreting the residuals vs. fitted values plot for verifying the assumptions of a linear model

4
Do these residual plots indicate that my least squares regression coefficient estimates may be biased?
3
Residual plot with a slope of 1
6
How to tell that a reciprocal relationship exists by a residual plot?
1
Does this plot suggest violation of equal variance?
0
Estimating error - residuals vs. fitted values plot
7
Should random effects be included in fitted values when making a binned residual plot for a binomial GLMM?
7
Homoscedasticity Assumption in Linear Regression vs. Concept of Studentized Residuals
2
Rules of thumb for partial residual (component + residual) plots as diagnostics for linearity?