I have the following Y outcomes distribution with the normal density function represented by the superimposed red line: 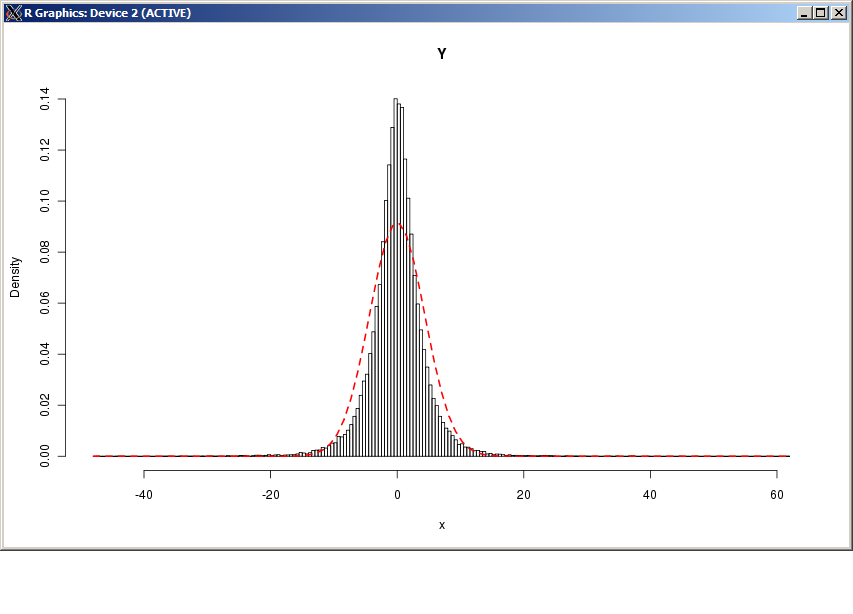 I need to develop a regression methodology to predict $Y$ given a number of predictors $X_n$. OLS doesn't seem to fit the bill because of the non-normal distribution of $Y$.

Which distribution of the dependent variable is relevant?

First, there is no reason to think that OLS will do badly on this data. At least none from looking at your dependent variable. However...

Second, Looking at the distribution of your dependent variable is not so helpful. Even regression models that assume Normally distributed errors only expect them to be Normal after conditioning on X. This does not imply that the marginal distribution is Normal, which is what you plot here, I think. So seeing fat tails here is not necessarily a problem.

OLS does not describe a model but a procedure (minimise the sum of squared errors). OLS generated coefficient estimates have various properties depending on what you are happy to assume by way of an actual statistical model of the the data generating process. The more you assume, the more you get to say. Any good econometrics text will go into the gory details of this, since econometricians always want to know what they can infer from as few assumptions as possible. But in short, you can go a long way without explicitly assuming they are even conditionally Normal.

Probit regression and the alternatives

Probit does allow you to specify a distribution. Indeed, all generalised linear model, a class which includes homoskedastic linear models for which OLS is the maximum likelihood estimation procedure and probit models allow you to specify the distribution of the dependent variable. You can always do that. And you can often only partially specify it too and get some more general results. The class of generalised linear models provides a good starting point when looking for 'alternatives'.

I don't know if I understand the graph properly because I can't see anything that varies at 0.5 intervals (except the histogram bins, but they are designed to do that sort of thing). So thus far, I see no reason to consider probit models.

This is an old thread but I just came across it. Just one quick comment - when your range is so large, 0.5 increments are fairly minute. That means it approaches being a continuous variable, and linear regression would be far easier to interpret than an ordered logit. Ordered logit coefficients are easy to look at, but not so a) simple to explain to a non-technical audience and b) not very detailed. They tell you the proportional odds above and below a line (odds ratio of moving up the chain, but don't know how far up you go).

As conjugateprior implied, I would use this histogram to say "Yeah, this looks close enough to normal to me let's model with OLS or GLS or something linear", and then look at the residuals you get. In my experience normality tests are very sensitive, so if you have high kurtosis like this in the residuals, it may not be the end of the world for you. Social scientists eyeball these things all the time, it's kind of common procedure (for better or worse).

Not the answer you're looking for? Browse other questions tagged regression normal-distribution probit or ask your own question.

2
What can be gained by including the distribution of the dependent variable in a GLM?

3
What are the dangers of using a (log)normal distribution for a discrete response?
0
Is it possible to convert a degree of freedom in t-distribution follows a standard deviation of normal distribution?
6
Heteroscedasticity and non-normal errors are only an issue when predicting from a linear model - why?