I am new to stats and have struggled to understand what is the "right continuous with left limits" property of cumulative distribution functions about (i.e. càdlàg). I did my research, but still have no intuition on why that is. Could anyone please shed some light on why are the cdfs càdlàg?

The cadlag property arises naturally as a necessary property of distribution functions when defined as $F(x) = \text{Prob}(X\leq x)$), and is best understood for the case of discrete random variables.

Assume that a random variable takes the values $X \in \{1,2,3\}$. It is intuitively evident, that if we want to graph the distribution function as a line, in the interval $[1,2)$ the graph will be a straight line: probability mass arises in relation to $1$, but for all values in $(1,2)$ no additional probability mass exists. So it is natural that this graph segment includes the left end. But exactly at $2$ it should jump (since additional probability mass arises at this point exactly but not for any $2-\epsilon$ point) and then again it should remain a straight line in $[2,3)$. So we have to have something like the upper graph in the following image: 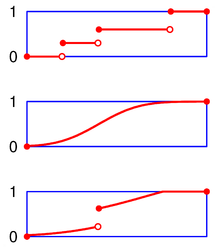 We see that the distribution function in this case emerges as right-continuous and it cannot be left-continuous if it is to maintain its ability to represent correctly how probability mass accumulates here. This "cad" property also guarantees the existence of the right limit so there is no point in saying that the function is "lad".

Regarding the "lag" part of the property, it comes from the fact that each graph segment has to be a straight line, since in say, $(1,2)$ accumulated probability does not change as already said (always talking for a discrete random variable). This guarantees that the left limit exists.

Not the answer you're looking for? Browse other questions tagged distributions cumulative-distribution-function or ask your own question.

4
Distance metric for survival functions?
2
Integrating out parameters in a Gaussian distribution
2
Summation of binomials
1
How to calculate the cumulative distribution function of a GEV distribution when $1+\xi(x-\mu)/\sigma\le0$?
2
How can a 'tall-and-skinny' property related to kurtosis be stated rigorously in terms of its (smooth) probability functions?
0
Understanding Simple Inverse Distribution