Is the inference from a parametric test valid when the population distribution is not normal?

This question arose from reading this post: T-test for non normal when N>50?

In the response to this post, the author outlines really well that the assumption of normality with regard to the t-test is about the sampling distribution of the means and not the population distribution.

I need to correct a number of mistaken or partly misplaced ideas in the question first (as well as some that aren't in the question but are commonly seen and may be indirectly influencing the way you ask your question), but I will return to the main issue.

The answer you link to says:

As one of the comments below the answer points out, this claim is incorrect.

You need the denominator in the t-statistic to be (i) distributed as scaled chi and (ii) independent of the numerator.

There's no result I'm aware of that makes the t-statistic have a t-distribution in any other general circumstance of interest.

In addition, while you can use the CLT plus Slutsky's theorem to argue that a t-statistic will asymptotically approach a standard normal, (so that as sample sizes go to infinity you approach a level-$α$ test) there's nothing that makes it approach the $t$ (e.g. at least in some situations, it might always be better approximated by the normal than it is by the t, all along the way as $n$ increases).

There's also nothing that says that such a test will have good power (i.e. that would make us care to use it). In fact asymptotically the power may be quite poor compared to alternatives (indeed the ARE of the t-test can go to zero).

[One of the comments under that answer points this error out but it has not been addressed by the person who answered.]

That said, however, often the t-test does work at least moderately well; but that's casual observation and not in any sense a theorem. It would not do to be overly reliant on it without understanding something of the circumstances with which one was dealing.

parametric statistics are using sample data to draw inference about population parameters like the mean, or the difference in means between two populations.

I recognize that you're not saying that parametric statistics is only about means there, but I want to take a moment to deal with a not-uncommon idea that they do.

One can care about a population mean without remotely caring about whatever "central tendency" might be.

This distribution is commonly used to model a number of things. A typical example is inter-event times (indeed you can derive it as the inter-event time in a Poisson process). Let's imagine we're doing just that (using it as a model for inter-event times). It looks like this: 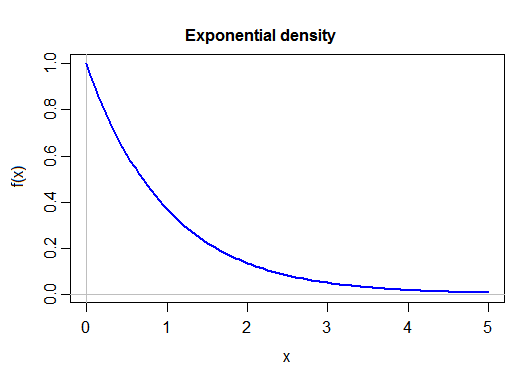 I'm not even sure we can say that the exponential distribution has a central tendency -- but it makes perfect sense to use its population mean to describe the process, it's still the average inter-event time. It's not the typical inter-event time for a single event, but if I am repeatedly experiencing this process that mean is very much of interest.

is the inference gained from the test informative when the population is not normal and is thus poorly described by the mean and variance?

Outside some very particular situations, this is not the best way to think about it. It doesn't really matter whether the particular population parameter of interest is typical of the distribution (in whatever sense that 'typical' is intended).

It's easily possible for a population mean to be of interest even when the mean is not a 'typical' value (e.g. when the mean and the mode are quite different). Whether a particular population parameter is of interest (might be suitable for some hypothesis) is not so much a question of what the distribution looks like, but of what the question is that you want to answer.

For example, if I have to wait for 100 inter-event times in the above example, the population mean on the individual times is an important thing to be thinking about, even though most of the time I'll wait much less than the mean.

We can also construct tests based on sample means without assuming normality (this is an unrelated issue to the above one, but you seem as if you might be partly conflating the two issues, so I better discuss it). In the above exponential model we have a different parametric assumption, and we can base a suitable test on that assumption (and it can sensibly be based on the sample mean, though it's not quite optimal choice when comparing two small samples). Or if we don't have a parametric model, we can nevertheless construct a test that doesn't make a parametric assumption but still deals with (say) a difference in population means (such as a permutation test of the difference in sample means).

However, in the other hand, just because I may want to test something in relation to a population mean, that does not necessarily imply that the sample mean is a good way to construct a test of it. If I were interested in the difference in population means for two samples from logistic distributions, I would be better to use something other than the sample mean as the basis of the test (indeed, a Wilcoxon-Mann-Whitney test -- used as a test of a shift in population mean -- would be an excellent choice in that case).

In summary: let us begin to summarize that by passing back to the title question.

Is the inference from a parametric test valid when the population distribution is not normal?

It certainly can be. The consideration of validity of a parametric test is not related to whether or not we're dealing with normality.

When looking at what to test and how to test it, I think it boils down to answering two main questions --

It depends on the degree and type of non-normality. Even with relatively small sample sizes the test is conservative with skewed distributions but not strictly "valid" since the actual p is lower than the nominal p (if you use p=0.05 as a cutoff you will reject a true null hypothesis less than 0.05 of the time. If your browser lets you run unsigned applets you can explore this yourself here: http://onlinestatbook.com/stat_sim/robustness/index.html

Other deviations from normality (such as kurtosis) may have different effects.

Not the answer you're looking for? Browse other questions tagged assumptions normality-assumption population parametric or ask your own question.

83
T-test for non normal when N>50?
2
Comparing mean difference between groups where raw data follows a long tail distribution
3
When, if ever, should a normality test be performed on real-world data?
0
How to check if means and variances are normally distributed?