How to compare measurement data resulting from automatic processing vs. visual inspection?

Make sure you plot them. You should always plot your data. You may not even need a formal test if the plot looks right.

Square the value and you get the coefficient of determination, which describes the amount of variability in Y that is attributable to X.

@whuber's comment and @Chris Beeley's answer both hint that your data are very obviously highly correlated (see plot). Most statistical tests are seeking evidence to dismiss a null hypothesis of "no relation" between the two variables. It is very obvious that there is a strong relation between your two variables so it is pretty trivial to use a test to confirm that. There are various ways of describing how strong it is, but it is hardly worth while doing a test of the null hypothesis of no relationship.

It is not surprising that there is a relationship between an observation and an automated estimate of the same process. So before picking a test you need to think what do you want to test? At one level, obviously the two estimates are related. At another level, they obviously aren't exactly the same. So what needs to be established (I'm not trying to sound smart, just thinking aloud really).

I suspect what you're really after is something like "how good is the visual observation at predicting the software result" or vice versa. If so, it is not so much a test you need as a predictive model. Your data look appropriate for a linear regression model. 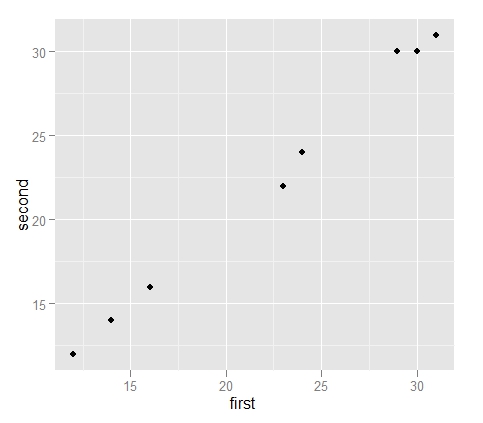 Not the answer you're looking for? Browse other questions tagged correlation dataset or ask your own question.