I have the results of an lmer model (in R) with the following variables:

After performing an ANOVA test I get the following results:

I have trouble interpreting the three-way interaction (last line) and put in into words. I would say that the effect of the distance on the amount of carbon in the different fractions of the soil depends on which species (A or B) you are around.

Also, as this interaction is significant it wouldn't be relevant to interpret the Distance:Species effect for example, as that effect is also involved in the interaction Fraction:Distance:Species. But I can't go further with the results of this last interaction.

Thank you so much for your help !

I am now looking at the graphs you suggested me to plot. 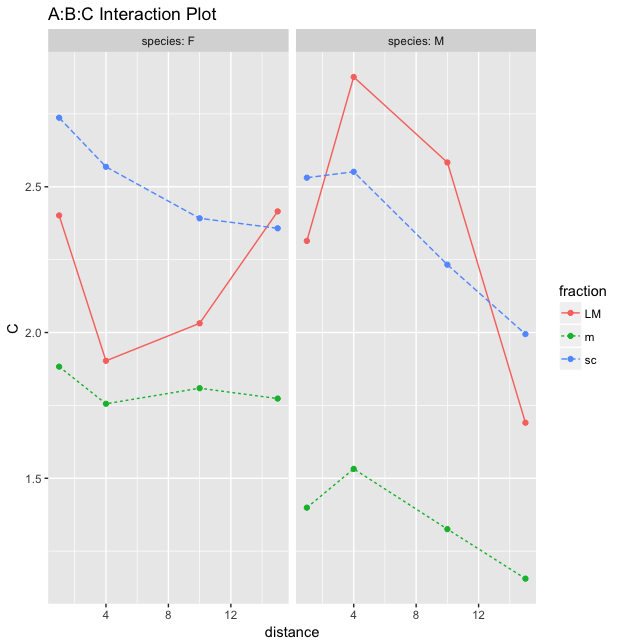 1) My interpretation would be that for the two species, the blue and green fractions have almost parallel lines, meaning that there should probably be no interaction between fraction and distance for any of the species. The amount of C is dropping with the distance but this « dropping » difference is not significantly different depending on the fraction.

2) Then here, I wonder if it is right to work by comparing two fractions at a time ? Should I also compare only two distances ? (check wether the lines are parallel between 1-4 or 4-15 etc ?)

What of the following comparison would be right :

If yes, what I understood is that I would probably have to correct some F values because the DF used in the two two-way interaction will be different than in my overall model (source: http://www.ats.ucla.edu/stat/mult_pkg/faq/general/threewayanova.htm)

4) Is it the right direction to get more details about my data ?

If is it, how can I can the Mean Square of my residuals in R ? The results of my ANOVA on my lmer model does not give me a « residuals » line. I called df.residual() to get my degree of freedom but I don’t know how to go further with the MS.

Thank you a million time again for your help !

This shouldn't be too bad because you have one variable with only two levels and it has no main effect (probably no scale issues between the two species). Your final suggestion, split by the two species is fine up to that point. But doing separate analyses is not the way to go because what the 3-way told you is that if you look at those different species you're going to get differences in effects. What you need to do is visualize your data. I would suggest you make two graphs plotting your data as two two-way interactions. Put your distance on the x-axis and take the predicted lines from the model for each level of Fraction within that species and plot them. That should give you a good perspective on what your 3-way interaction is. It's in the differences between those two graphs. If you're stuck at that point then post your graphs and ask questions about interpretation and fit.

BTW, you could put means aggregated over the random effects on the graphs as well. Get help in R on predict.merMod to help generate predictions from the model to plot it.

Not the answer you're looking for? Browse other questions tagged mixed-model interaction interpretation lme4-nlme or ask your own question.