Why is a deterministic trend process not stationary?

I am confused on why a simple trend process is not stationary. Consider the following process:

The variance is clearly constant. However, the mean $bt$ is dependent on $t$. When shifted in time, the mean only depends on the time interval and is independent of history. For example, $Y_{0,t}$ and $Y_{t,2t}$ would have the same mean and variance. So why is this process not stationary?

Secondly, if we now consider the following process:

In this case, the mean is constant, however, the variance is dependent on $t$. However, in this case the variance is proportional to the time interval, which means $Y_{0,t}$ and $Y_{t,2t}$ would have the same mean and variance. So why is this process not stationary?

time-series stationarity intuition
Share
Improve this question
edited May 30 '12 at 18:16 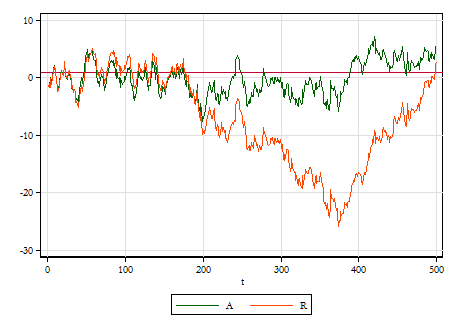 The theoretical mean of $A$ is $1$ (red horizontal line) and its standard deviation is $3.2$. The graph will deviate from that mean over time, but not too far. $R$ will look qualitatively similar to $A$ early on, but begins to drift apart in the middle, but converges towards the end. In theory, the unconditional mean and variance of $R$ do not exist, and you can see that in the graph.

Now plot all 3 series on a graph with the same scale. 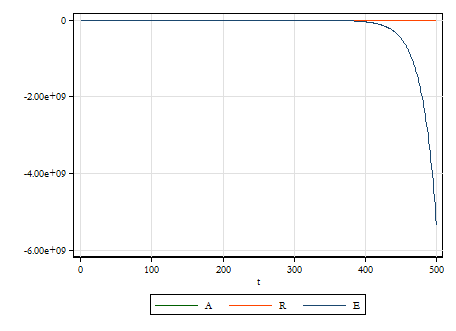 Can you see how $E$ just makes the other two look like a straight line? The slope parameter in $E$ exceeds $1$ by 0.05, the same amount that it falls short for $A$, but what a difference it makes! Here, the average makes no sense at all.

The other point is that $A$ and $R$ look like the sorts of things we see every day, but we are bad at guessing which ones are stationary, especially with fewer data.

This is shamelessly plagiarized from Econometric Methods by Jack Johnston and John DiNardo, which is sadly out of print.

You answer your question yourself: Because stationarity implies both a constant variance, and a constant mean.

A process $Y_t$ is stationary when for any vector of times $(t_1,...,t_n)$ and for every time interval $\tau$ the joint distribution of the vector $$ (Y_{t_1},...,Y_{t_n}) $$ coincides with the joint distribution of the vector $$ (Y_{t_1+\tau},...,Y_{t_n+\tau}) $$ In your example, the distribution of the "vector" $$ (Y_1) $$ is normal (I'm assuming that the shocks $\varepsilon_t$ are normal in your example) with mean $a+b$ and variance equal to the variance of $\varepsilon_t$. On the other hand the distribution of the "vector" $$ (Y_2)=(Y_{1+\tau}) $$ where $\tau=1$ is normal with mean $a+2b$ and same variance. Therefore the process cannot be stationary. In the same way you prove that the second example you show is stationary (variance grows). For what we have said above you should see that a stationary process always has constant mean and variance. I think you are confusing stationary processes, e.g. AR(1), with a process with stationary increments, i.e. random walks.

Not the answer you're looking for? Browse other questions tagged time-series stationarity intuition or ask your own question.