I'm interested in classifying distributions with a high skew. Is it appropriate to say that just because a distribution has a high skew, does it have a large standard deviation?

Most simple example in excel: Skewness is equal in both cases, standard deviation highly different. Therefore it is not appropriate to say in general that high skew means large std.

Skewness is a direction in which a sample "leans" and does not depend on scaling, whereas standard deviation highly depends on scaling 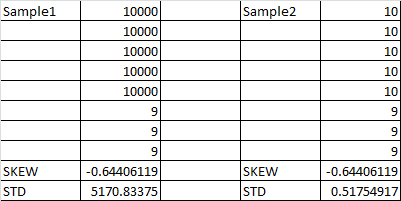 Further examples could be found where standard deviation is same, yet skewness is different.

Skewness (by any reasonable measure - and there are a number that are used) is a consequence of the shape of the distribution, not of its location or scale - you could add(/subtract) a constant to the random variable or multiply(/divide) by a constant, and it would not change how skewed the distribution was.

For example, the most common measure of skewness, the one based on the third moment, can be written as the third moment of a standardized variable: $E[(\frac{X-\mu_X}{\sigma_X})^3]$. If you rescale the variable ($Y = kX$) -- which changes the standard deviation by a factor of $k$ - you scale both the numerator and denominator in that fraction by the same scale, which then cancels: $\frac{Y-\mu_Y}{\sigma_Y} = \frac{kX-k\mu_X}{k\sigma_X} = \frac{X-\mu_X}{\sigma_X}$, and so the expectation of its cube is unchanged.

Similar cancellation occurs with other measures of skewness.

Not the answer you're looking for? Browse other questions tagged distributions standard-deviation skewness or ask your own question.