I am describing a new species of ant. Molecular and Morphological data suggests that there are 2 separate species. In fact we are very certain they are separate based on behavioral information. I would like to statistically analyze the measurements I have taken from my samples to support what I have found morphologically and molecularly.

However, I am having trouble with where to begin with my statistical analysis, or what sort of analysis I should do.

My preliminary data showed that they were separate, but I only used a Z-test. Here are two characters we reported on a poster. A z-test was "helpful" but not really informative or useful without an ANOVA, which I can't do since the measurements are dependent of the colony and the sampling issue. 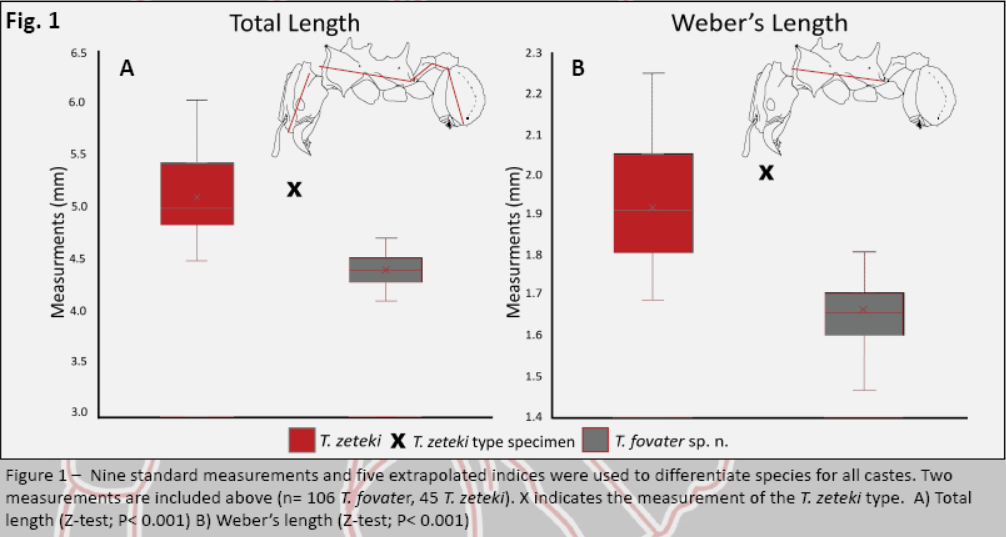 I had started to do a principal components analysis of the measurements (using PNG) with 4 principles resolving ~90-95% of the variance; as suggested by a colleague. The scatter plot did show the expected grouping by species(Red= Described, Grey- Undescribed, Yellow= Should have been measured as undescribed). But I am not certain of what to do with that data or if it really resolves my issue of dependent variables.

I had considered finding the averages of colonies, since each worker sampled came from the same mother and has the same genetic information as its sisters. But the sampling issue arises. Are the measurements I took of workers from a colony replication for that colony? Should the type specimen of the described species I measured hold more weight than other specimen of that species I measured (I measured a paratype and 3 holotypes)?

Please let me know if I should provide more information. Or there is something wrong with my train of thought/reasoning. Thank you.

Browse other questions tagged multivariate-analysis non-independent or ask your own question.