Is it possible to perform the following test of hypothesis?

I have no idea how to proceed in this case. Some help/hints are appreciated.

This is a nice example of an unfamiliar looking test. Studying it therefore helps us understand the fundamental concepts better.

Inspired by the Neyman-Pearson theory, we would naturally seek a critical region to be a subset of possible values of $t_n$ that have small probabilities under both hypotheses. Such values are far from both $0.5n$ and from $0.75n$, which are close to the modes under the hypotheses. Evidently such a critical region will then comprise, at most, three intervals: one from $0$ to, say, $c_1 \lt 0.5 n$; another from $c_2\gt0.5 n$ to $c_3\lt 0.75 n$; and a third from $c_4\gt 0.75n $ to $n$. The critical region will be of the form

and we would like this probability to be as close to $0.05$ as possible for both hypotheses.

For large $n$ we could estimate these cutpoints $c_i$ using Normal approximations and then check. For smaller $n$ we may do a brute force search over all possibilities. I like this approach because it will not be approximate: it will give us the best possible solution, which can be instructive. (It might, however, take considerable time to find, especially for small test sizes $\alpha$! The brute force search described below takes about a minute for $\alpha=0.01$, for instance ($n=68$ is the smallest sample sizes that admits such a simultaneous test of level $0.01$).)

If more than one critical region is found for a given $n$, we might then select the one that covers the most ground--has the longest total length. That will help make it most powerful among many alternatives. Among such critical regions, if there is more than one, let's take the one for which the false positive rates are as close as possible to each other so as not to favor one hypothesis over the other.

The smallest $n$ with any solution is $n=35$. The best solution in the preceding sense is 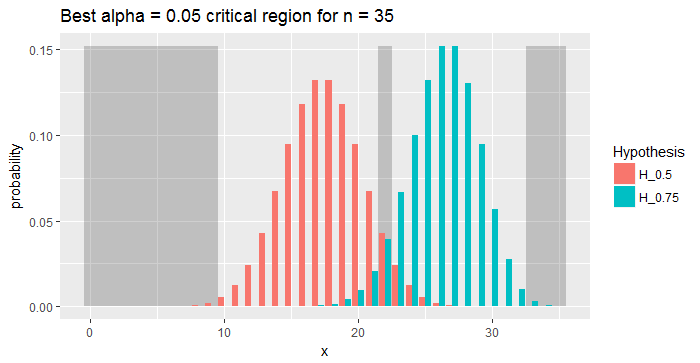 Here is a plot of the probability functions of both hypotheses, distinguished by color. The critical region $C_{35}(0.05)$ is located within the darker background areas. For each hypothesis, the chance of being in one of the darker areas is less than, but almost equal to, $\alpha=0.05$.

9
If all 1000 test patients are not cured by the drug, can't we say that we accept the null hypothesis?