I am testing forecasts against against realized values with a number of observations of 4000.

When I calculate the mean MAE, its relatively low. Around 10% deviation to the original variable.

However, when I regress the forecasts against the realized values I get an r-squared value of 0.06...

Is there any rationale behind this?

How this can be?

Extrem outliners? Or extrem bias? Or something else?

The MAE is calculated as $mean(abs(y_{real,t+1} - y_{predict,t+1}))$. The t+1 indicating that I only forecast and compare one-step-ahead forecasts.

and the regression is simply calculated by MATLAB with the function regstats,which regress $y_{real}$ over $y_{predict}$.

I do the regression during the mincer-zarnowitz test. It completely fails. 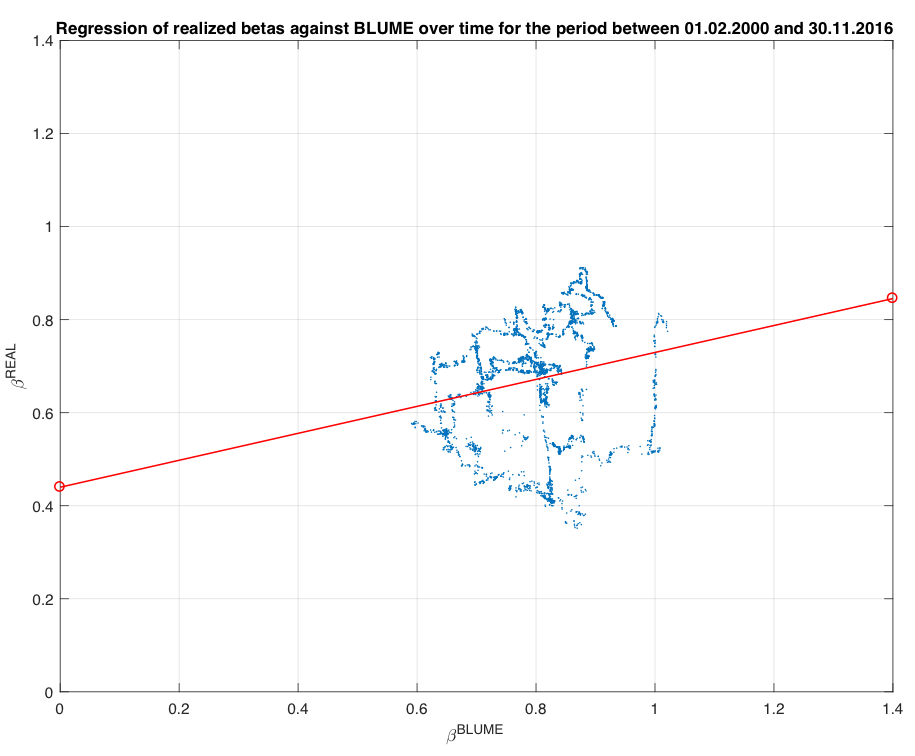 for me it seems that there is a time gap between the realized and forecasted values.

Maybe you are trying to forecast new values for some future horizon based on the old values. When the future is not behaving as the past you will have high deviations at the beginning and the end of your testing period.

In this case the Regression indicate that there is no relation in your data although it is clear from the plot that there is a strong relation... just image the points at the right lower corner weren't there.... check these points.

Not the answer you're looking for? Browse other questions tagged forecasting r-squared mae or ask your own question.

2
NMDS: why is the r-squared for a factor variable so low
9
Why not using the R squared to measure forecast accuracy?
1
Why do I get identical MSE, MAE, DAC from different GARCH specification?
31
Why does minimizing the MAE lead to forecasting the median and not the mean?
2
Does normalisation affect the values of Mean Squared Error, Mean Absolute Percentage Error etc.?
0
High AUC but low R squared in a random forest classifier
4
300k observations, significant results but very low adjusted r-squared
0
MAPE is better but MAE is worse in regression models