Anova one way (getting different p-values in calculator and F table). Why?

I am resolving an anova one-way exercise. But I am doubtful because when using the F-table to get the p-value, I am getting a probability around 2.2 (an obvious error), but if I use a calculator the probability is 0.042.

I have an independent variable with 4 levels. The mean and standard deviation are this:

I did these calculations:

With this f value I check the f table for a 5% of significance level, using a degree of freedom of 3 in the numerator and 36 in the denominator and the value in the table is around 2.2. So I'm not understanding why I get 2.2 and the calculator gives 0.042. Do you have any idea?

The value you're looking up in the table is a critical value, not a p-value. There's no contradiction when they differ since they're not at all the same thing.

Note that when you looked up the table your data values didn't come into what you looked up at all. Only the degrees of freedom and the significance level. What you looked up is the smallest F value that would be significant at the 5% level, which you compare your F with; if it's at least that large, you have a significant F. (That F value is 2.87. Your F value was 3.03 which was larger than it, so you would reject the null if you did it that way)

This is completely consistent with getting a p-value below 0.05: 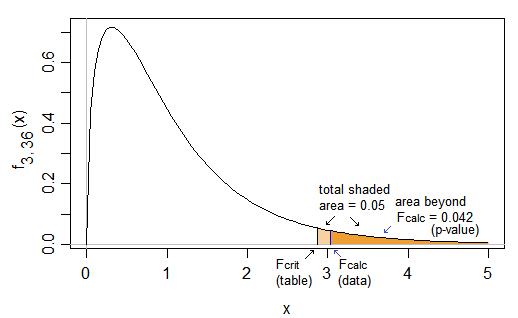 We can see that there are two ways you can get the outcome of the hypothesis test:

(ii) see if the p-value is less than the significance level.

You can do whichever one of the two is convenient (done correctly, they give identical reject/don't reject decisions).

In general, if you have a p-value (say from computer output), you will compare that with the significance level, but if you are working "by hand" and have only tables, compare the F with the F critical value. Note that if you're using tables you often need to get values not in the table.

Your table value is 2.2. Compare the computed value of F= 3 with 2.2. This suggests signficant effect at alpha = 5%..You need to check that .042 is some value that you have generated. May be it is p-value. You should know that F-table does not show p-values. It incorporates only F values.

Not the answer you're looking for? Browse other questions tagged anova or ask your own question.

19
How do I find values not given in (interpolate in) statistical tables?

4
Incremental one-way ANOVA
0
Which effect size analysis is most meaningful for mixed ANOVA
1
One way Anova question
0
Difference Between Full Model and Reduced Model in One-Way ANOVA?
0
R: Mixed ANOVA works with the aov{stats} function and fails with the anova_test{rstatix} function. Why?