How to interpret non-significant effect of a covariate in ANCOVA?

I need to use ANCOVA to analyse effect of executive functions (EF-covariate) on scores collected during a test. I want to compare this effect between a control and schizophrenics group (variable diagnoza).

I conducted an analysis of covariance and I have some questions. Here is SPSS output for my ANCOVA model: 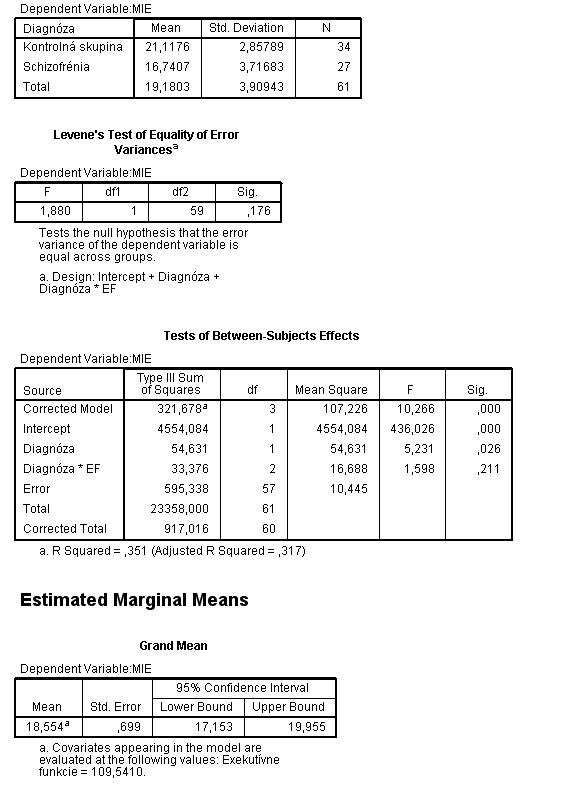 @andrea is giving you good advice. It makes little sense to fit a model with the diagnosis*EF interaction, but without EF. Furthermore, if both EF and the interaction are 'non-significant' that would generally be taken to imply that they are unrelated to the response variable.

However, I would urge some caution here. First, it is not clear how much power you have to detect an effect, should one actually exist. I notice that you have an $N$ of 61. That simply may not be enough data to resolve what is nonetheless a real difference. Consider this, without meaning to be dismissive, an ANCOVA with 2 groups is essentially a glorified t-test. To use two arbitrary values that are often taken as standard, a 'medium' effect size & 80% power, a simple independent groups t-test requires an $N$ of 128, if I remember correctly. In this case, there are additional complexities due to this being an ANCOVA (i.e., you are burning extra degrees of freedom, but also have the opportunity to account for some of the residual variability). There are additional issues: power is maximal to detect a linear effect, but it's thinkable that a non-linear effect exists, you could have range restrictions that limit power, and my first guess would be that EF is not orthogonal to diagnosis (i.e., the distribution differs between the two groups, although I don't know). I would urge you to look at your data. For example, you could make a scatterplot of EF vs. MIE, with two different plotting symbols for the different diagnoses, and overlaid with a loess fit for each group. Check to see if the distributions and fits look sufficiently similar for your satisfaction before deciding what to conclude and what to do next.

Not the answer you're looking for? Browse other questions tagged interpretation ancova or ask your own question.

44
Should covariates that are not statistically significant be 'kept in' when creating a model?

4
ANCOVA to check effect of covariate
0
ANCOVA: ordinal covariate on SPSS
1
Using ANCOVA when the covariate is not normally distributed
3
repeated measures ANCOVA; covariate main effect and post-hoc tests
2
ANCOVA with significant covariate differences between groups
1
Steps to conduct ANCOVA between two groups that has 2 covariate?
0
ANCOVA baseline as covariate