Why do lm and biglm in R give different p-values for the same data?

Here is a small example:

Now, try the same thing with biglm from the biglm package:

Note that we need the print and digits to see the p-value. The coefficients and standard errors are the same, but the p-values are very different. Why is this so?

To see which p-values are correct (if either), let's repeat the calculation for simulated data in which the null hypothesis is true. In the present setting, the calculation is a least-squares fit to (x,y) data and the null hypothesis is that the slope is zero. In the question there are four x values 1,2,3,4 and the estimated error is around 0.7, so let's incorporate that in the simulation.

Here is the setup, written to be understandable to everyone, even those unfamiliar with R.

The simulation generates independent errors, adds them to y.expected, invokes lm to make the fit, and summary to compute the p-values. Although this is inefficient, it is testing the actual code that was used. We can still do thousands of iterations in a second:

Correctly computed p-values will act like uniform random numbers between $0$ and $1$ when the null hypothesis is true. A histogram of these p-values will allow us to check this visually--does it look roughly horizontal--and a chi-squared test of uniformity will permit a more formal evaluation. Here's the histogram: 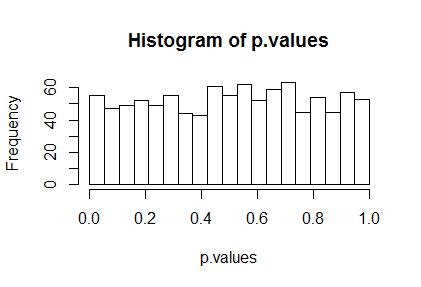 and, for those who might imagine this isn't sufficiently uniform, here's the chi-squared test:

The large p-value in this test shows these results are consistent with the expected uniformity. In other words, lm is correct.

Where, then, do the differences in p-values come from? Let's check the likely formulas that might be invoked to compute a p-value. In any case the test statistic will be

equal to the discrepancy between the estimated coefficient $\hat \beta$ and the hypothesized (and correct value) $\beta = 0$, expressed as a multiple of the standard error of the coefficient estimate. In the question these values are

for the intercept estimate and

for the slope estimate. Ordinarily these would be compared to the Student $t$ distribution whose degrees of freedom parameter is $4$ (the amount of data) minus $2$ (the number of estimated coefficients). Let's calculate it for the intercept:

(This calculation multiplies the left-tailed Student $t$ probability by $2$ because this is a test of $H_0:\beta=0$ against the two-sided alternative $H_A:\beta \ne 0$.) It agrees with the lm output.

An alternative calculation would use the standard Normal distribution to approximate the Student $t$ distribution. Let's see what it produces:

Sure enough: biglm assumes the null distribution of the $t$ statistic is standard Normal. How much of an error is this? Re-running the preceding simulation using biglm in place of lm gives this histogram of p-values: 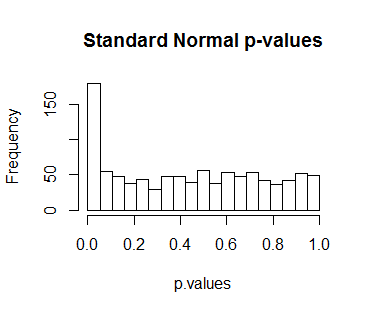 Almost 18% of these p-values are less than $0.05$, a standard threshold of "significance." That's an enormous error.

Some lessons we can learn from this little investigation are:

Not the answer you're looking for? Browse other questions tagged r regression p-value linear-model or ask your own question.

5
Why does GBM predict different values for the same data
14
Comparing two linear regression models
2
Different regression coefficients in R and Excel
7
Why `arima()` and `Arima()` give different AIC and sigma2 while giving the same coefficients and same likelihood?
1
Linear probability model: Why do lm() and glm() not give the same results in R?
0
How to improve the fit of a beta zero-inflated regression model (GAMLSS)?