Neural networks - how can I interpret what a hidden layer is doing to my data?

So following the example at the end of the chapter here, I generated a neural network for digit recognition which is (surprisingly) accurate. It's a 784->100->10 feedforward network with one input layer, one hidden layer, and one output layer. 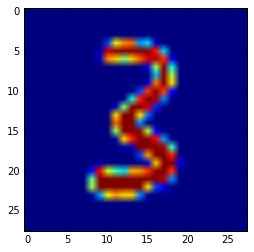 After running through the first layer, which has a sigmoid activation function: 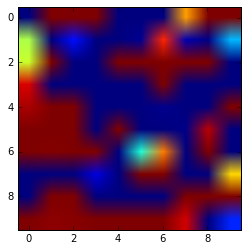 Then, I generate the final output with:

Which has the following output:

Basically it makes the correct guess. How can I interpret visually what is happening to the input image? Is there a way to visually represent what each neuron is "looking for"? I've used the Tensorflow Playground, and the layers make intuitive sense. For example, something simple like this image, I can see how the first two neurons of the hidden layer are basically just the positive and negative averages of the first two input neurons: 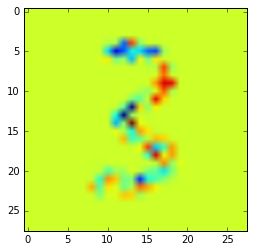 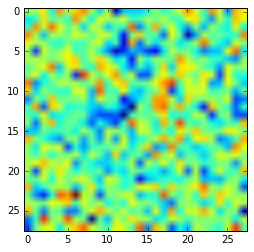 Edit: Per @Lagerbaer 's suggestion below, I trained a simpler network. This network is a feedforward 784->1->2 network with one input, one hidden, and one output layer to distinguish only between 0s and 1s in the MNIST dataset. It's >99% accurate and here is an image of the weights: 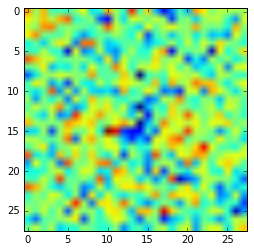 From my own understanding, it is notoriously difficult to infer useful things from the weights of a complex neural network.

However, with 10 digits, you could play around a bit.

Don't look just at the hidden-layer neuron with the strongest weight for 3, look at the top few.

Then look at those hidden-layer neuron's input weights, but without multiplying with the input image already. That shows you which regions of the input image the neuron "scans" for.

The problem is that it's getting quite complicated quite fast. As a simpler exercise, you could try to build a smaller neural network that just distinguishes between two relatively dissimilar shapes and build your intuition from there.

Not the answer you're looking for? Browse other questions tagged neural-networks data-visualization or ask your own question.

1
Interpretation of a deep neural network

3
Neural networks creates negative output
0
Neural Networks - Do all neurons in hidden layer activate?
0
Neural network hidden layer output
2
What is the difference between calculations and output of individual neurons in a layer of neural network?
0
How can I derive a linear model from a neural network with one hidden neuron?
4
Neural Network - Can Hidden Layer Nodes be omitted from output equation
1
Understanding ReLU: Does this (unlucky intialized) network assign all instances to the same class?
1
mathematical definitions of neural network terminology: layer, hidden unit, neuron
0
Questions about MNIST samples training multilayer perceptron with the structure 784x2500x2000x1500x1000x500x10