Firstly I should mention I am quite unfamiliar with the subject (operational risk). And I am also beginner in risk management. It is also worth to mention that this task is on academic level .

I intend to create something called yearly Aggregated Loss Distribution (also known as Loss Distribution Approach or LDA). It should represent probability of achieving certain amount of loss in entire year that is created by combining frequency of losses and severity of losses distributions.

My data are daily entries which defines the number of losses (frequency) and amount (severity) and covers 7 years, so I can easily transform them to monthly/quarterly/yearly. I am concerned about my methodology, however it seems to me silly and quite obvious since I am beginner in the subject I wish to make sure I do not make any logical mistake. So in steps my procedure looks like this:

If my description seems unclear here is the short video that basically shows exact same thing I am doing:

So simplifying my question: To achieve same thing like in this video should I use distributions fitted for yearly data? Intuitionally I would say yes, but I need to be sure.

Thank you in advance

Your approach is as silly as everyone else's. Look at what the FRB is doing to forecast losses for CCAR Banks, their approach is described in: Dodd-Frank Act Stress Test 2016: Supervisory Stress Test Methodology and Results, June 2016. Read “Operational Risk Model Enhancement” section in Box 1 and “Losses Related to Operational-Risk Events” Section in Appendix B.

They using forecast combination approach where they average outputs of historical simulation and panel regression on macroeconomic variables.

The historical simulation is essentially a bootstrapping variation of LDA. It assumes that the losses are compound random variables, such as Poisson compound. They don't call it LDA anymore, because the term is out of favor in US banking supervision. The main difference with LDA is that instead of modeling the severity they bootstrap it from actual losses in the event database. In other words each loss in the compound Poisson is a random draw from the actual event losses observed historically.

The regression part is a simple panel regression on a bunch of variables such as firm characteristics and macroeconomy. You can get a flavor of the model from the FRB paper: U.S. Banking Sector Operational Losses and the Macroeconomic Environment

We have seen this question ( or one like this ) before . It involves using daily data to compute aggregated forecasts yielding the probability of making a goal. Look at Predict number of users for a discussion of how Proctor & Gamble phrased the question. You might also look at http://www.autobox.com/cms/index.php/blog for a discussion of how to actually use daily data to form a useful model. I have been one of the developers of AUTOBOX which might be useful to you in showing you an approach. This of course requires the user having daily data for every day . If you have any possible supporting variables they can also be considered for inclusion. In specific it might be interesting to predict/model the amount of losses as it relates to the # of losses.

Since you are new to this, I think it's best to walk through an example. Let's consider the case of a single risk $Z$ (i.e. a certain type of operational risk).

The Loss Distribution Approach can be described as:

I'll describe an example now. Let's assume we're considering a single (operational) risk $Z$. Let's assume (based on suitable fitting methods) that the distribution of severity of losses are independent and identical and follow:

Similarly, we can say the frequency of losses follows:

Now, I can only assume (having not watched the linked video) that your goal is to evaluate $E[Z]$, $\text{SD}(Z)$, $\text{VaR}_{q}[Z]$ and $\text{ES}_{q}[Z]$ etc. via Monte Carlo methods. Luckily for us there are closed-form, analytical solutions for the expectation and standard deviation (allowing us to check our simulation results).

To perform the simulations I used MATLAB with $K=10^{6}$ simulations.

So the vector Z_vec contains the $10^{6}$ simulations for $Z$. From here it's all very straightforward, calculating the mean, standard deviation and whatever else you are interested in.

From my simulations, I obtained:

Similar calculations can be made for any sort of risk measure you would like. Keep in mind this method can be generalized to include more risks (i.e. $Z_{i}$, $i=1,2,\ldots$) and include dependencies between the $Z_{i}$.

In terms of your confusion about the time horizon of losses, the time horizon you set is purely up to you. If you want to consider yearly losses, then partition your 7-year period into $j$ yearly periods. For any given yearly period $j$, the observed frequency of losses, $n_{j}$, will be the count of losses. The $n_{j}$ go towards estimating the frequency distribution $N$. Similarly, the severity of those losses in all the yearly periods go towards estimating the severity distribution $X_{i}$.

Hopefully the following diagram illustrates the point well, where in this example there is a 3-year period split into $j=3$ 1-year periods. Each $n_{k}$, $k=\{1,\ldots,j\}$ contributes to estimating $N$ and there are 90 $X_{i}$ observed over the 3-year period which go toward estimating $X$. 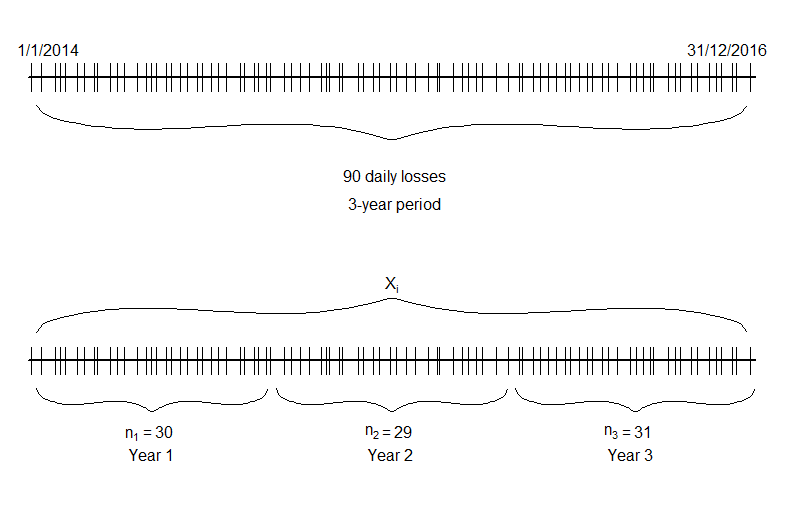 Not the answer you're looking for? Browse other questions tagged distributions monte-carlo risk or ask your own question.