Why does the accuracy not change, when applying different alpha values in L2 regularisation 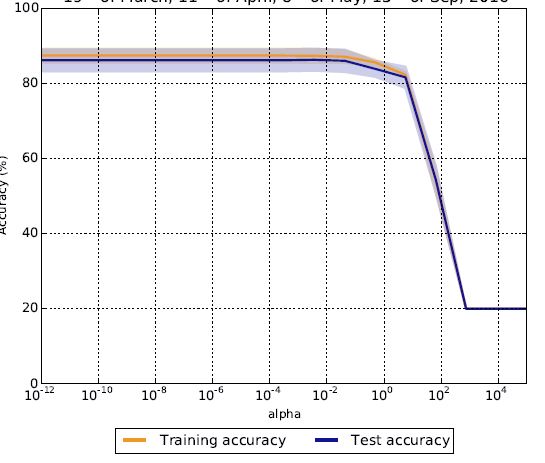 In the case of inaccuracy, the loss function just checks whether the largest predicted value matches the target class, and the loss is the fraction incorrectly predicted.

Cross-entropy loss awards lower loss to predictions which are closer to the class label.

The difference between cross-entropy loss and inaccuracy is the difference between taking a course pass/fail or for a grade. A pass/fail rubric just tells you whether minimum requirements were satisfied. A letter grade tells you how well a student performed. Thus, the inaccuracy score is concealing the effect of the alpha parameter: the predicted values for the observations are almost certainly changing at different values alpha, but the relative ranking of the scores isn't, so (in)accuracy is flat.

For illustration, consider the following results

These two models will obviously have the same (in)accuracy for this data, but the cross-entropy loss will be completely different.

The inaccuracy is obviously $0.0$ for both alpha_1 and alpha_2, using the rule that argmax of the predictions is the predicted class. Moreover, since the inaccuracy is bounded below by $0.0$, it is impossible to improve upon either model when the models are compared on the basis of inaccuracy loss.

For alpha_2, the cross-entropy loss is $-\log(0.51)-\log(1-0.49)=-2\log(0.51)\approx 1.35$. This shows that a metric which is sensitive to the degree of precision of the predictions is more informative than one which is not, in the sense that more (less) confidence about the correct class is reflected in the loss.

Stated another way, the (in)accuracy of alpha_1 and alpha_2 is the same, so inaccuracy loss on its own is not sufficient to distinguish between the two models.

By contrast, the cross entropy loss is completely different: alpha_1 is the better model according to cross-entropy loss, because its loss is lower than the loss for alpha_2.

Not the answer you're looking for? Browse other questions tagged neural-networks regularization accuracy or ask your own question.