I am generating 8 random bits (either a 0 or a 1) and concatenating them together to form an 8-bit number. A simple Python simulation yields a uniform distribution on the discrete set [0, 255].

I am trying to justify why this makes sense in my head. If I compare this to flipping 8 coins, wouldn't the expected value be somewhere around 4 heads/4 tails? So to me, it makes sense that my results should reflect a spike in the middle of the range. In other words, why does a sequence of 8 zeroes or 8 ones seem to be equally as likely as a sequence of 4 and 4, or 5 and 3, etc.? What am I missing here?

TL;DR: The sharp contrast between the bits and coins is that in the case of the coins, you're ignoring the order of the outcomes. HHHHTTTT is treated as the same as TTTTHHHH (both have 4 heads and 4 tails). But in bits, you care about the order (because you have to give "weights" to the bit positions in order to get 256 outcomes), so 11110000 is different from 00001111.

Longer explanation: These concepts can be more precisely unified if we are a bit more formal in framing the problem. Consider an experiment to be a sequence of eight trials with dichotomous outcomes and probability of a "success" 0.5, and a "failure" 0.5, and the trials are independent. In general, I'll call this $k$ successes, $n$ total trials and $n-k$ failures and the probability of success is $p$.

The aparent paradox can be summarized in two propositions, that might seem contradictory:

These propositions are both true. Because the event $e_1$ includes many sequences.

All of the $2^8$ sequences have the same probability 1/$2^8$=1/256. It is a wrong to think that the sequences that have closer to an equal number of 0s and 1s is more likely as the question is interpreted.. It should be clear that we arrive at 1/256 because we assume independence from trial to trial. That is why we multiply the probabilities and the outcome of one trial has no influence on the next.

EXAMPLE with 3 bits (often an example is more illustrative)

I will write the natural numbers 0 through 7 as:

Sycorax's answer is correct, but it seems like you're not entirely clear on why. When you flip 8 coins or generate 8 random bits taking order into account, your result will be one of 256 equally likely possibilities. In your case, each of these 256 possible outcomes uniquely map to an integer, so you get a uniform distribution as your result.

If you don't take order into account, such as considering just how many heads or tails you got, there are only 9 possible outcomes (0 Heads/8 Tails - 8 Heads/0 Tails), and they're no longer equally likely. The reason for this is because out of the 256 possible results, there are 1 combination of flips that gives you 8 Heads/0 Tails (HHHHHHHH) and 8 combinations that give 7 Heads/1 Tails (a Tails in each of the 8 positions in the order), but 8C4 = 70 ways to have 4 Heads and 4 Tails. In the coin flipping case each of those 70 combinations maps to 4 Heads/4 Tails, but in the binary number problem each of those 70 outcomes maps to a unique integer.

The problem, restated, is: Why is the number of combinations of 8 random binary digits taken as 0 to 8 selected digits (e.g., the 1's) at a time different from the number of permutations of 8 random binary digits. In the context herein, random choice of 0's and 1's means that each digit is independent of any other, so that digits are uncorrelated and $p(0)=p(1)=\frac{1}{2}$; .

The answer is: There are two different encodings; 1) lossless encoding of permutations and 2) lossy encoding of combinations.

Ad 1) To lossless encode the numbers so that each sequence is unique we can view that number as being a binary integer $\sum_{i=1}^82^{i-1}{X_i}$, where ${X_i}$ are the left to right $i^{th}$ digits in the binary sequence of random 0's and 1's. What that does is make each permutation unique, as each random digit is then positional encoded. And the total number of permutations is then $2^8=256$. Then, coincidentally one can translate those binary digits into the base 10 numbers 0 to 255 without loss of uniqueness, or for that matter one can rewrite that number using any other lossless encoding (e.g. lossless compressed data, Hex, Octal). The question itself, however, is a binary one. Each permutation is then equally probable because there is then only one way each unique encoding sequence can be created, and we have assumed that the appearance of a 1 or a 0 is equally likely anywhere within that string, such that each permutation is equally probable.

Note: At the current time, the above answer is the only one containing an explicit computational comparison of the two encodings, and the only answer that even mentions the concept of encoding. It took a while to get it right, which is why this answer has been downvoted, historically. If there are any outstanding complaints, leave a comment.

Update: Since the last update, I am gratified to see that the concept of encoding has begun to catch on in the other answers. To show this explicitly for the current problem I have attached the number of permutations that are lossy encoded in each combination. 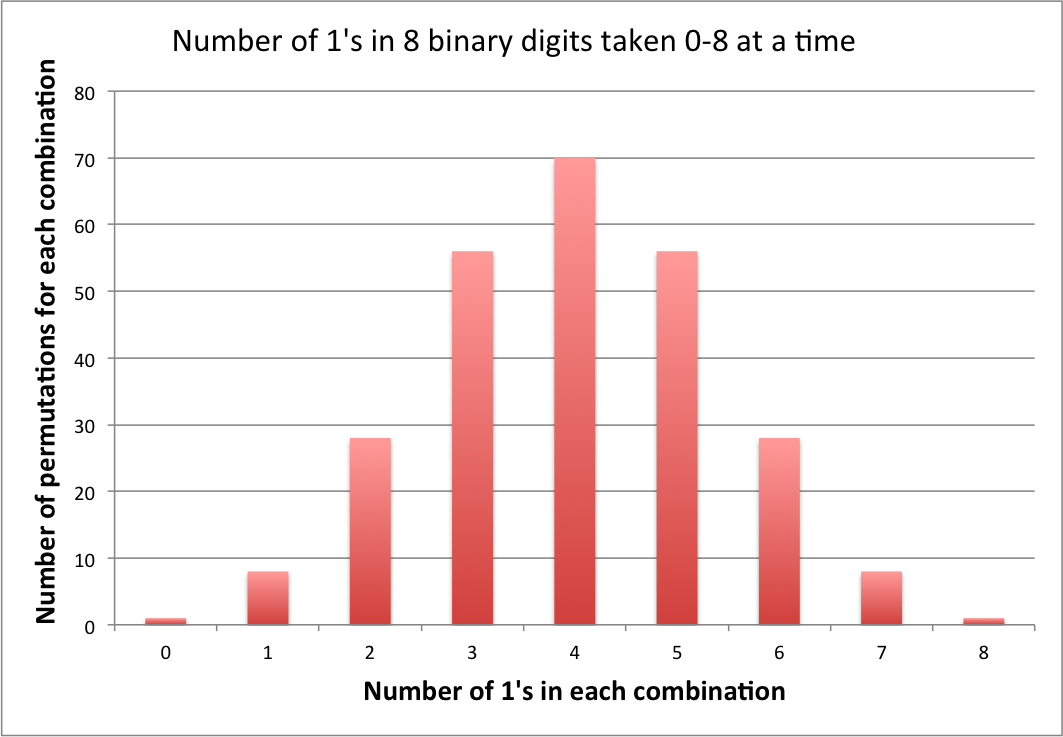 Note that the number of bytes of information lost during each combinatorial encoding is equivalent to the number of permutations for that combination minus one [$C(8,n)-1$, where $n$ is the number of 1's], i.e., for this problem, from $0$ to $69$ per combination, or $256-9=247$ overall.

Each bit you choose is independent from each other bit. If you consider for the first bit there is a

This also applies to the second bit, third bit and so on so that you end up with so for each possible combination of bits to make your byte you have $(\frac{1}{2})^8$ = $\frac{1}{256}$ chance of that unique 8 bit integer occurring.

If you do a binary search comparing each bit, then you need the same number of steps for each 8 bit number, from 0000 0000 to 1111 1111, they both have the length 8 bit. At each step in the binary search both sides have a 50/50 chance of occuring, so in the end, because every number has the same depth and the same probabilities, without any real choice, each number must have the same weight. Thus the distribution must be uniform, even when each individual bit is determined by coin flips.

However, the digitsum of the numbers isn't uniform and would be equal in distribution to tossing 8 coins.

There is only one sequence with eight zeros. There are seventy sequences with four zeros and four ones.

Think about rolling a couple of dice, a common example of non-uniform distribution. For the sake of the math, imagine the dice are numbered from 0 to 5 instead of the traditional 1 to 6. The reason the distribution is not uniform is that you are looking at the sum of the dice rolls, where multiple combinations can yield the same total like {5, 0}, {0, 5}, {4, 1}, etc. all generating 5.

As both @Sycorax and @Blacksteel point out, this difference really boils down to the question of order.

I'd like to expand a little bit on the idea of order dependence vs. independence.

Not the answer you're looking for? Browse other questions tagged binomial-distribution random-generation uniform-distribution or ask your own question.

61
Brain teaser: How to generate 7 integers with equal probability using a biased coin that has a pr(head) = p?
0
Page 184 of The Undoing Project
1
Why is a 100 heads run surprising?