What is the linear algebraic and geometric interpretation of the sentence found on this post:

When $y = X\beta + e$, the least squares problem which imposes a spherical restriction $\delta$ on the value of $\beta$, [which] can be written as

It sounds as though it has to be connected with the concept of spherical errors, but there is likely more to it. Further I was intrigued by this illustration comparing OLS to ridge regression: 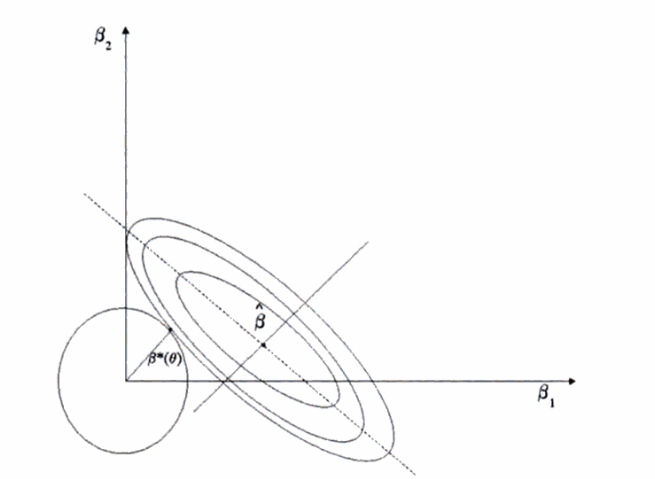 We can characterize ridge regression as a restricted least squares problem. Consider the least squares in the centered and scaled multiple regression model $\bf y^*=X^*\beta^*+\varepsilon$ subject to the spherical restriction $$\beta^{*'}\beta^*\leq d^2$$ for a given value $d^2.$

Continuing along the hints given by W. Huber in the comments, I wonder if this is related to the ellipsoid representation, and the geometric interpretation of ridge regression as a contained OLS optimized at the locus of osculation determined by $\mathbf \beta^\top K \beta$: 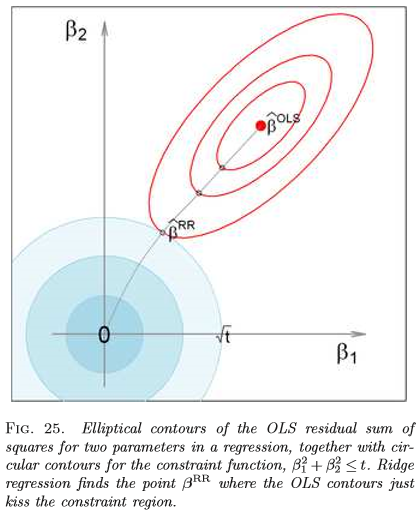 As explained in the comments, the problem is ridge regression, where the squared error is minimized subject to a bound on the $\ell_2$ norm of $\beta$.

As far as I can discern, constraining the $\ell_2$ norm of $\beta$ is not connected to linear model assumptions that the error is spherical. After all, using Bayesian language, the likelihood $\pi(y|\beta)$ being spherical does not suggest that the prior $\pi(\beta)$ should be too.

12
When would least squares be a bad idea?
12
Applying ridge regression for an underdetermined system of equations?
66
Why does ridge estimate become better than OLS by adding a constant to the diagonal?
7
If $\operatorname{Var}\left(\epsilon_i\right) = h\left(X\right) \neq \sigma^2$, what can we know about $\operatorname{Var}\left(\hat{\beta}\right)$?
5
Penalizing the Ordinary Least Squares estimation
7
Ridge regression: regularizing towards a value
10
Conditional mean independence implies unbiasedness and consistency of the OLS estimator
2
Why regularization/shrinkage method works for p>n?
2
OLS: Variance Covariance matrix of residuals