How to identify outliers from a Gumbel distribution with known parameters?

I have a model for data in my experiment that states that the data has a Gumbel distribution with known location and scale.

I am then looking at observations with very high scores that I suspect to be outliers.

Is there a Bayesian approach (or otherwise) to get the probability that this observation is from the underlying Gumbel distribution?

As an end result I would like to decide whether or not I accept this observation as coming from the underlying Gumbel distribution.

I am in fact working with biological data and have demonstrated both empirically and through a set of assumptions that the distribution is in fact of Gumbel type with parameters that can be estimated from the data itself and/or from a theoretical perspective given some assumptions.

Now, while most data behaves in-line with this distribution, I would like to find the probability that observations with very large values might not be from the same Gumbel distribution but due to some other phenomenon that is not described in this distribution that I want to detect.

In this case, updating the data using the new observation would not be useful (especially considering that this observation might come from another random variable with a different distribution).

I am able to calculate the one-side probability of how extreme the observation is by using.

Any thoughts on this?

If $F$ is given in terms of a scale-location transformation of a distribution with distribution function $G$ with scale parameter $\sigma$ and location parameter $\mu$ then the probability is $$1 - F(x) = 1 - G\left( \frac{x - \mu}{\sigma}\right).$$

For the Gumbel distribution with $G(x) = \exp(-\exp(-x))$ this amounts to computing $$1 - \exp\left(-\exp\left(-\frac{x-\mu}{\sigma}\right)\right).$$ Note that in this parametrization of a location-scale transformation of $G$ the location parameter $\mu$ and the scale parameter $\sigma$ are not the mean and standard deviation of the distribution.

In some applications, e.g. in biological sequence analysis, the probability is used to judge a very large number of observations, and though the computation is the same, we do face a multiple testing problem, which should be accounted for in the evaluation of the computed probabilities.

The following was added to answer a question in a comment by the OP. If there are two known distributions, or models, with densities $f_1$ and $f_2$, respectively, and we assign prior probabilities $\pi_1$ and $\pi_2$ to these the conditional probability of model 1 given $x$ is $$\frac{\pi_1 f_1(x)}{\pi_1 f_1(x) + \pi_2 f_2(x)}.$$ This easily generalizes to a finite number of models, but we have to specify these other models in addition to the prior probabilities to carry out the computation of the posterior probability of model 1.

The following material responds to an earlier version of the question, which I interpreted as asking how to test whether a collection of observations is consistent with an assumed Gumbel distribution with known parameters. Edits to the question now suggest the interest lies in identifying individual (high) outlying observations, which is a slightly different question. The entire collection of data could depart from a Gumbel shape, for instance, without containing any outliers. However, the presence of an outlier or outlier also constitutes a departure from the assumed distribution, so the methods described here remain relevant to the problem, albeit indirectly.

Usually this kind of question is answered inversely: you test the hypothesis that the data came from the specified distribution.

The Kolmogorov-Smirnov test tends to work well: so well, in fact, that with largish datasets (numbering in the hundreds or greater) it can detect such small deviations that it can be too powerful in some applications. But here it sounds like such power is desired.

The ks.test routine in R can be persuaded to conduct this test even though R does not appear to support Gumbel distributions. Use the fact that the exponential of a Gumbel variate is a location and scale version of the Exponential distribution (a Gamma distribution with shape 1 and scale 1).

For example, suppose x is an array of numbers and the supposed Gumbel parameters are mu for location and beta for scale. Then

yields a p-value for this test. As a check, we can generate n iid values from a Gumbel distribution with parameters mu.actual and beta.actual and test them against supposed values mu and beta:

When the parameter values agree, we should obtain a uniform distribution of p-values: 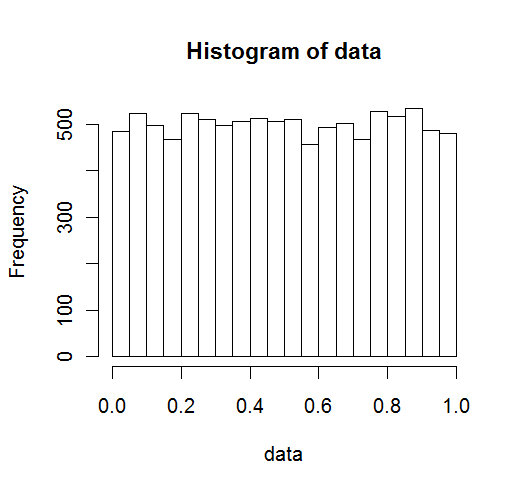 It looks good. To assess the power of this test, we draw random variables from a slightly different distribution and look again: 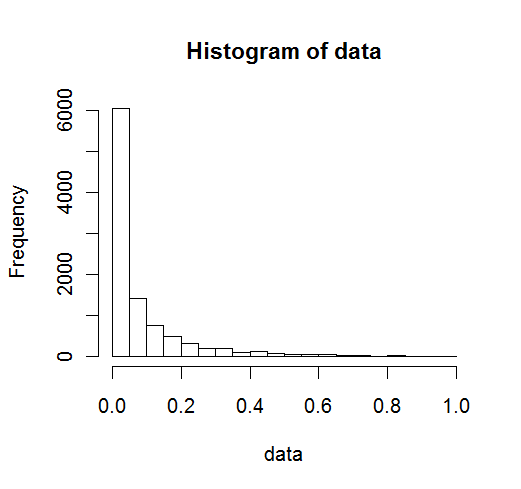 In this case, using (say) a test level of 0.05 and drawing only 8 values from a Gumbel(1,1) distribution and supposing it is a Gumbel(0,1) distribution--a shift of +1--this plot shows we would have about a 60% chance of detecting the difference, because about 60% of the results are to the left of 0.05. That chance increases to 90+% for 16 draws (not shown here). Detecting a change in shape is harder--but you can run whatever simulations are appropriate for your hypotheses to learn the details.