What is the optimal case/control ratio in a case-control study? Why do most textbooks or monographs suggest that it is more than 1? Can it be less than 1 (what are the drawbacks?)? Thank you.

As @EpiGrad says - there is no optimal ratio since otherwise everyone would use it. I suggest you address the issue by looking at the cost of a control versus the cost of a case.

The basis for a case-control study is that you want to study rare outcomes (cancer, re-operations etc). By being rare your problem is that finding these patient is the major cost.

Controls are basically anyone without the disease and therefore you have an abundance of these. Finding 10 more controls is usually not so difficult.

What you want to see is something where you have a difference between the two studied sample like in the case below: 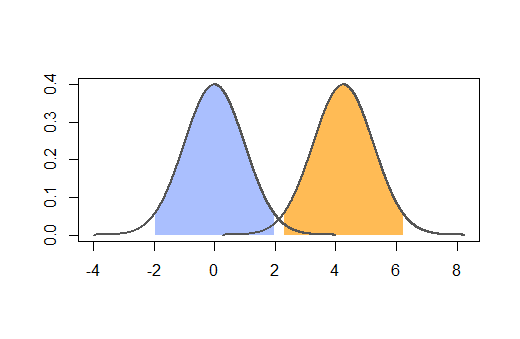 If you think you'll end up in a situation where you can't see the difference you need to increase your number of patients. In other words you have this situation: 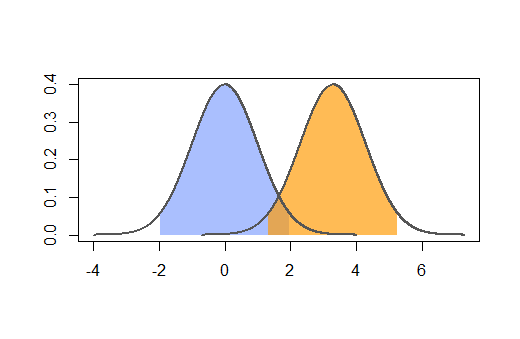 That you want to change by recruiting more patients in one group into this one: 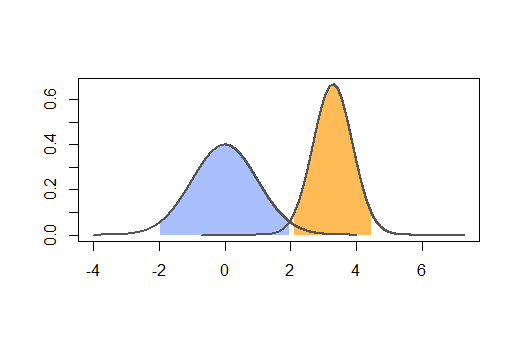 The statistics is very straightforward you gain most power by having groups of equal size. Since your usually in a situation where you can't find more patients in the rare outcome group you want to increase the number of patients in the control group. The central limit theorem gives that the with of the normal curve is given by this simple equation:

As you can see, the effect on the width of the curve each studied person has, decreases as defined by the $\sqrt{n}$. This gives that the optimal ratio is where you get most out of the time and effort you spend recruiting patients/controls.

What's vital in case-control studies is that you have to put just as much effort into the controls as you do with the patients. For instance you can't interview the interesting cases yourself while sending a student to talk to the controls. Identifying the correct source population can also be rather challenging.

There isn't necessarily an optimal case-control study ratio, otherwise it would be the one we all used. Generally, I is argued that a higher ratio of controls to cases results in greater study power, though at the cost of a more expensive study. I once did an analysis of a series of case-control studies nested within a cohort study. The precision of the estimates increased dramatically using 2 or 3 controls per cases, but then the payoff began to level out.

It may be something worth evaluating in the study planning stage via simulation.

Not the answer you're looking for? Browse other questions tagged case-control-study or ask your own question.

0
Size of training in Naive Bayes