How to 'sum' a standard deviation?

For example considering output from a wind farm:

We can say that in the average year the wind farm produces 10,358 MWh, but what is the standard deviation corresponding to this figure ?

Short answer: You average the variances; then you can take square root to get the average standard deviation.

Amazingly, the distribution of a sum of two normally distributed independent variates $X$ and $Y$ with means and variances $(\mu_X,\sigma_X^2)$ and $(\mu_Y,\sigma_Y^2)$, respectively is another normal distribution

So to answer your question:

Conceptually you sum the variances, then take the square root to get the standard deviation.

Because i was curious, i wanted to know the average monthly mean power, and its standard deviation. Through induction, we need 12 normal distributions which:

That would be 12 average monthly distributions of:

We can check our monthly average distributions by adding them up 12 times, to see that they equal the yearly distribution:

Note: i'll leave it to someone with a knowledge of the esoteric Latex math to convert my formula images, and formula code into stackexchange formatted formulas.

Edit: I moved the short, to the point, answer up top. Because i needed to do this again today, but wanted to double-check that i average the variances.

This is an old question but the answer accepted is not actually correct or complete. The user wants to calculate the standard deviation over 12-month data where the mean and standard deviation is already calculated over each month. Assuming that the number of samples in each month is the same, then it is possible to calculate the sample mean and variance over the year from each month's data. For simplicity assume that we have two sets of data:

Now we want to calculate the same estimates for

To estimate mean and variance over the total set we need to calculate:

1-We want to calculate the variance of energy production over the whole year: then by averaging the two variance we arrive at zero, which is not correct since the energy per day over the the whole year is not constant. In this case we need to add the variance of all the means from each subset. Mathematically in this case the random variable of interest is energy production per day. We have sample statistics over subsets and we want to calculate the sample statistics over a longer time.

I'd like to stress again the incorrectness in part of the accepted answer. The wording of the question lead to confusion.

The question have Average and StdDev of each month, but it's unclear what kind of subset is used. Is it the average of 1 wind turbine of the whole farm or the daily average of the whole farm? If it's the daily average for each month, you can't add up the monthly average to get the annual average because they do not have the same denominator. If it's the unit average, the question should state

We can say that in the average year each turbine in the wind farm produces 10,358 MWh,...

Further more, The Standard deviation or variance is the comparison against the set's own average. It does NOT contain any information regarding the average of its parent set (the bigger set which the computed set is a component of). 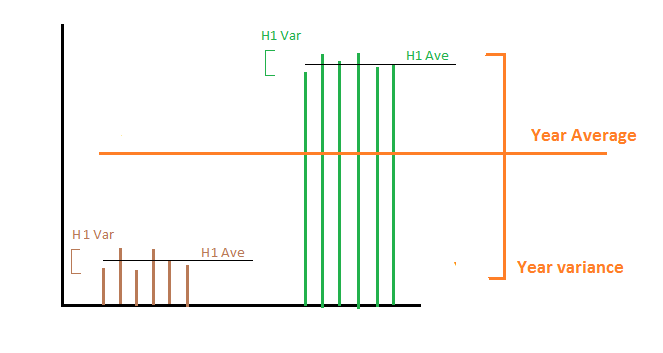 The image's not necessary very precise but it conveys the general idea. Let's imagine the output of 1 wind farm as in the image. As you can see, the "local" variance has nothing to do with the "global" variance, no matter how you add or multiply those. If you add the "local" variances together, it will be very small compare to the "global" variance. You cannot predict the variance of the year using variance of 2 half year. So, in the accepted answer, while the sum calculation is correct, the division by 12 to get the monthly number means nothing.. Of the three section, the first and the last section is wrong, the second is right.

Again, it's very wrong application, please do not follow it or it would get you into trouble. Just calculated for the whole thing, using total yearly/monthly output of each unit as data points depending whether you want yearly or monthly number,that should be the correct answer. You probably want something like this. This is my randomly generated numbers. If you have the data, the result in cell O2 should be your answer. 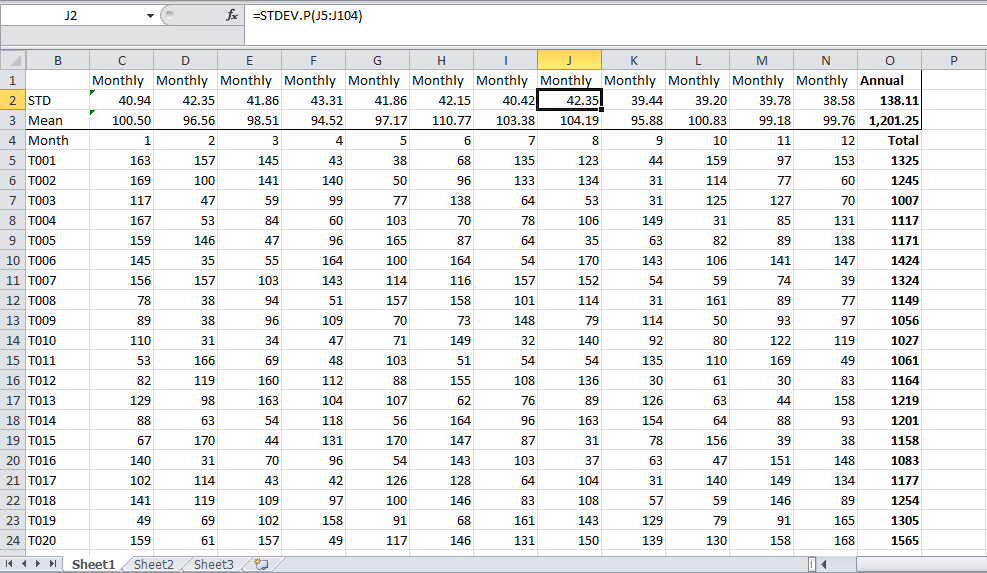 Given several days, and for each day we are given its Average, Sample StdDev and number of Samples, denoted as: $$ \mu_d,\ \sigma_d,\ N_d $$ We would like to compute the Average and Sample StdDev across all days.

We've had a similar problem in which we had a process that computes a daily Average and Sample StdDev and saves it alongside the number of daily samples. Using this input we had to compute a weekly / monthly Average and StdDev. The number of samples per day was not constant in our case.

I believe what you may be really interested in though is the standard error rather than the standard deviation.

The standard error of the mean (SEM) is the standard deviation of the sample-mean's estimate of a population mean, and that will give you a measure how how good your yearly MWh estimate is.

Not the answer you're looking for? Browse other questions tagged standard-deviation descriptive-statistics or ask your own question.