Expressing the LASSO regression constraint via the penalty parameter

Given the two equivalent formulations of the problem for LASSO regression, $\min(RSS + \lambda\sum|\beta_i|)$ and $\min(RSS)$ such that $\sum|\beta_i|\leq t$, how can we express the one-to-one correspondence between $\lambda$ and $t$?

The answer to your question follows from consideration of Lagrangian duality. This is worked in the post which I consider to be a duplicate in my comment to OP's post. In what follows, I work out what I find to be a more insightful derivation. 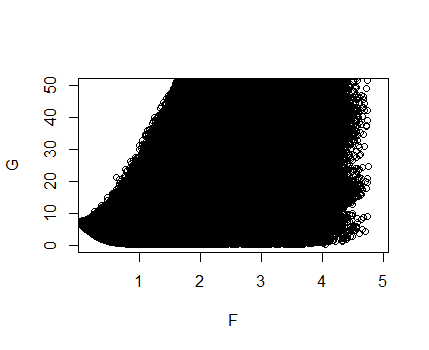 The points at the bottom left of the plot are the ones we're interested in. Those correspond to the values of $\beta$ that both have small $\ell_1$ norm and have small error. In fact, for those points at the bottom left, there are no $\beta$ which have the same fit and smaller size or the same size with better fit. To choose between these points, called pareto optimal points, we need to determine the relative importance of the fit and size, our two objectives. This should remind us of the tuning parameters $\lambda$ or $C$ in the unconstrained or constrained lasso, respectively. Below we plot in green some lasso solutions, computed from glmnet, imposed on the above graph. 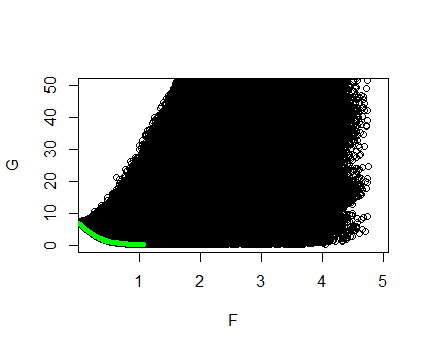 Notice that lasso found exactly the pareto optimal points. This is very surprising, though! How did a multidimensional objective get optimized by a one dimensional objective? The process is called scalarization: we take weights $\mu_1, \mu_2 \geq 0$ and form the problem $$\arg\min_{\beta \in \mathbb{R}^p} \mu_1 \left( \frac{1}{2n} \|y-X\beta\|_2^2 \right) + \mu_2 \|\beta\|_1.$$ When both objectives are convex, which they are here, this scalarized problem finds all pareto optimal points.

Now that we understand better what we're trying to solve and have a good visualization, let's now focus on finding a relationship between the tuning parameters $\lambda$ and $C$.

Not the answer you're looking for? Browse other questions tagged lasso or ask your own question.

37
Why do we only see $L_1$ and $L_2$ regularization but not other norms?
22
KKT versus unconstrained formulation of lasso regression
4
ridge regression parameter space