Use of Gamma Distribution for count data

I am working on my data including the insect abundance in dependence of landscape variables with a nested random effect. Since i collected the individuals in the field i have count data and thought a poisson distribution would fit best (using lme4). Currently my model looks like this example glmer(insects~landscape1*landscape2 +(1|region/location), family="poisson", data=..). (no overdisperion)

Following "A practical guide to mixed models in R" http://ase.tufts.edu/gsc/gradresources/guidetomixedmodelsinr/mixed%20model%20guide.html i "should use" a lognormal or gamma distribution since they fit best. I tried lme with log-transformed response and glmer with gamma even if I have no continous data and both show similiar results in contrast to the glmer with poisson distribution. I also tried using ord_plot() and distplot() (pos. slope, negative intercept) which showed that log.series would be the best choice again (according to Friendly http://www.datavis.ca/courses/grcat/grcat.pdf chapter 2.3.).

I don't want to use the log-transformed approach but was wondering if I could also use gamma for discrete count data or only for continuous? Or do you can suggest any alternatives not using poisson for count data? Hope to get some new insights. Thank you

Here are the two outputs of the methods i was following to decide for the right distribution. There is one count with 0. I am not that familiar with statistics yet but i read a lot that log-transformed data are difficult to interpret and that it is better to go for another method if the data are not normally distributed. So, i thought there should be another way. 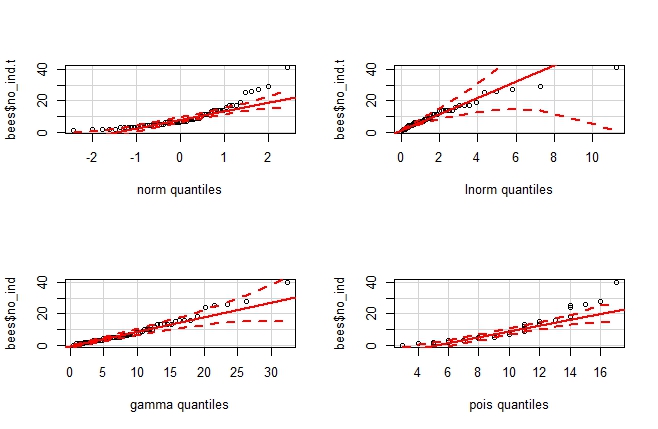 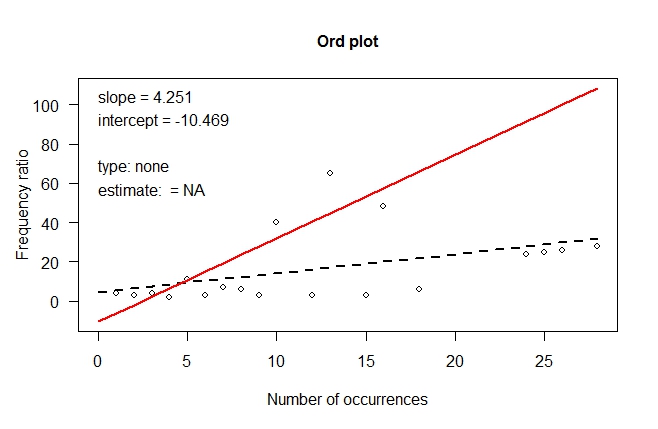 I think that you have been misled by "A practical guide to mixed models in R". The tests for normal, Poisson, gamma, etc. distributions proposed on that site look at the distribution of the response variable without reference to the values of the predictors. That's not helpful, and if that's what you did the results are not pointing you in the correct direction.

This becomes even more of an issue when you have multiple predictors and interactions, as in your case. There is no reason to suspect that your response variable values overall show any single distribution; the tests you performed based on that website's suggestions thus may be leading you astray. Your responses may actually be Poisson-distributed, but with the mean value of the Poisson distribution depending on the values of the predictors. As I read that website and look at your plots, it seems that the values of the predictors are nowhere considered. The points with highest quantiles on your Poisson plot may well be those whose predictor variables predict higher insect numbers.

Ignore those plots, and instead fit a model that shows well-behaved residuals. A generalized linear model based on the Poisson family would be a good place to start; that will allow for Poisson-based responses whose mean values are related to the predictors. As @Björn suggested in another answer, related approaches might be useful if Poisson in its simplest form fails.

In fact, one thing that may or may not make sense in your case is to fit a hierarchical model with e.g. a Poisson likelihood and random effects (e.g. normal distributed on the log-mean rate scale or gamma distributed on the mean rate scale) for region and location nested within region. This would assume that locations within a region are sort of similar in terms of the expected mean counts once you have taken model covariates (such as landscape) into account, and that regions are sort of similar to each other (again, once you have taken model covariates into account). "Sort of similar" here means that distribution parameters are exchangeable, i.e. after accounting for your model covariates, you would not know which one you would expect to have higher or lower counts. The main effect of doing this is that if your regions and locations are indeed somewhat similar, you end up getting some borrowing of strength across them. I.e. estimation becomes more efficient, because you exploit that you do not have estimate completely separate parameters for all locations (but also relies more on the assumption of exachangeability).

Not the answer you're looking for? Browse other questions tagged poisson-distribution count-data gamma-distribution lme4-nlme or ask your own question.