Regression- How to deal with this kind of non-constant variance?

This is a residual vs. predictor plot for my regression problem. All the other residual plots don't show clear non-constant variance, but this one definitely stands out, and its variance is not monotonic as x42 increases.

I've tried variance-stabilizing transformations (square root and log) on y and it doesn't work, quite expectedly. What are other things I can try in this case?

Edit 02/15/2017: The problem at hand is a variable selection and OLS problem for a chemical reactor data set. I have more than 50 predictors that could possibly explain my single response $y$. $x_{42}$ is a predictor that gets picked by best subsets, and it represents the effects of catalysts added to the reactor. Initially (in time) there was no catalyst added, then there's some, and eventually full dose of catalyst is added every day. As a result, the "distribution" of $x_{42}$ takes that shape.

$x_{42}$ is not a random variable that should take any known or unknown statistical distribution, because it's a variable driven by engineering decisions. My education tells me the "distribution" of predictor doesn't matter in regression, so I didn't have doubts whether OLS applies to my data set with a variable like $x_{42}$. 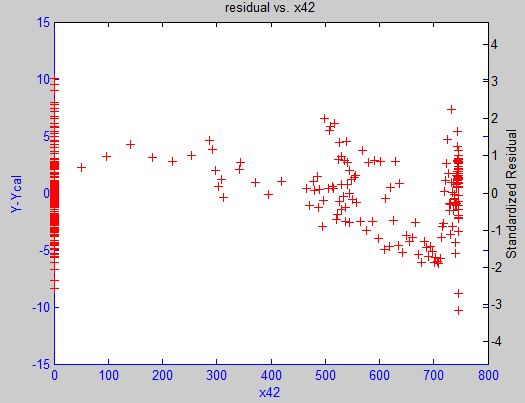 The assumption of homoscedasticity is that the variance of the distribution of the observations relative to their predictions (i.e. the regression line) is equal. In other words, the density plots depicted all have the same variance. In the example depicted there, there is only one predictor (making it easy to show the regression on one plane with just two axes). If there were multiple predictors, then the regression line would cut through k-dimensional space for k-1 predictors --- for 2 predictors, imagine a 3D cloud of points with the line of best fit cutting through it. If you look at the residuals relative to any one of those predictors, you're potentially looking at them from a weird angle. This can be especially confusing if one of your predictors is really weirdly distributed itself, as your x42 appears to be.

In order to see whether or not you have an issue with the homoscedastictiy of your residuals, you need to plot the residuals on the y-axis and the predicted values on the x-axis. In effect, this zooms in on the regression line itself --- no matter where it is in our hypothetical k-dimensional space --- and shows you the residuals relative to the regression line. I'm not sure what software you're using, but many will easy (or even automatically) produce such a plot for you.

If you do that and you still see a problem with the variance of your residuals, then you may want to consider WLS regression instead of OLS regression. It will give observations in lower-variance areas more weight in determining the regression coefficients, allowing for the fact that you apparently have better precision there. It also has the handy side effect of reducing the influence of potential outliers in the higher-variance parts of your data.

Looking at this sort of plot is very difficult because of the distribution of x42. Since most of its values are either zero or 750 the spread at those points is bound to look greater. If you want to see how the variance varies as a function of x42 I suggest plotting the square root of the absolute value of the residual and fitting a loess line. If that is essentially flat then all is well.

The more interesting question though is why x42 has such an unusual distribution and what hypothesis you can have about its relationship with any $y$ variable.

OP's question has an answer and that is by bootstrapping the regression problem and examining the confidence intervals of parameters and fit.

Not the answer you're looking for? Browse other questions tagged regression variance residuals or ask your own question.

4
How to treat this OLS based on residual diagnostics
3
How to deal with heteroscedasticty: choosing between White, WLS or Log linear model?
0
Regression Coefficient Inference with Non-normal Error Distribution
7
Homoscedasticity Assumption in Linear Regression vs. Concept of Studentized Residuals
0
Polynomial regression - non-constant residual variance
1
Heteroscedasticity - interpretation of residual plot and P-P plot