What is the distribution of the sample variance for a Poisson random variable?

The mean and variance of a Poisson random variable $X$ are both $\lambda$ but what is the distribution of the $\operatorname{var} X$ across a series of experiments recalculating each time? I would like to compute an envelope for a mean-variance plot of a number of experiments and wondered if their was an analytical formula as an alternative to sampling.

The distribution of the sample variance is slightly tricky, particularly because of the way the sample mean comes into it.

As a result you have a discrete distribution over a pretty complicated set of values (this set is countably infinite in size). The set of values taken also varies with sample size (n=3 yields a different set of possible values than n=10). Here's an example via simulation (though the simulation is so large that the distribution displayed is essentially the population cdf -- it's accurate to within about a pixel): 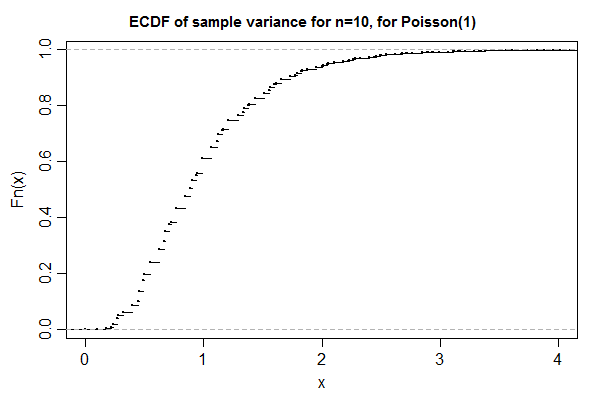 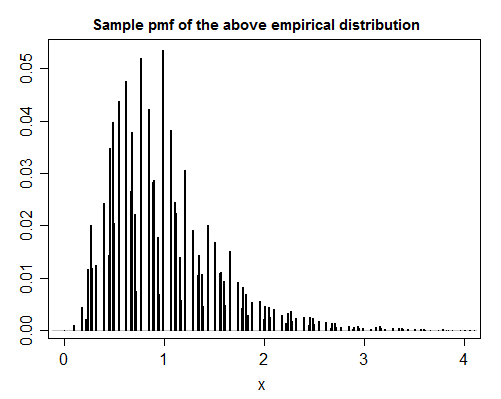 We can clearly see "clumpiness" in the distribution - uneven spacing, as well as an intermingled jumble of large and small probabilities.

The distributions are of course different at different values of $n$ and the Poisson mean, but the general impression (a clumpy discrete distribution, with uneven spacing and irregular progression of probabilities) is - unsurprisingly - similar across a range of values.

The issue is even trickier if you want to back out some form of confidence interval for the population variance, since I am pretty sure you won't have a pivotal quantity to work with.

However, you might be able to get somewhere via approximation. The upper tail in particular is a fair bit smoother than the lower tail and might be amenable to a continuous approximation.

It looks like either large $\lambda$ or large samples will give smooth outcomes that may have scaled chi-square approximations.

Not the answer you're looking for? Browse other questions tagged distributions variance poisson-distribution sample or ask your own question.

1
Is my variance compatible with a Poisson distribution