Does this Q-Q plot indicates leptokurtic or platykurtic distribution?

The points have shown a "hump" pattern but I can't really identify that is it a narrow hump or wide hump? 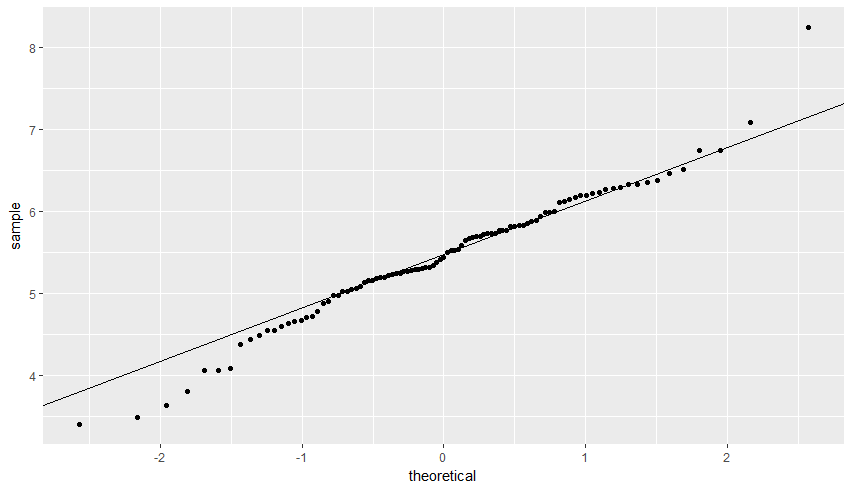 Hence, when there are large positive values of $z_{(i)}^2 - z_{0(i)}^2$ in the tails, you have positive excess kurtosis. This result confirms the well-known result that kurtosis measures tail extremity relative to the normal distribution.

If the line in the graph of the OP corresponds to the $(z_{0(i)}, z_{0(i)})$ line, then the graph shows positive excess kurtosis, because the tail extremities are more extreme than the normal distribution predicts.

Another correspondence between the normal quantile-quantile plot with the excess kurtosis $\kappa_e$ concerns the detrended plot, which can be constructed as a plot of $(z_{0(i)}, z_{(i)} - z_{0(i)})$.

I completely disagree with the recommendation to use density plots as regards diagnosing kurtosis. Since kurtosis measures only tails, and since the tails are very close to zero even for heavy-tailed distributions, it is very difficult to discern tail behavior from density plots. On the other hand, tail behavior relative to the normal distribution is obvious in the normal $q$-$q$ plot. That's what the plots are for. Further, the math I just showed gives a direct connection between the normal $q$-$q$ plot and the excess kurtosis statistic.

Kurtosis is a bizarre statistic that acts counterintuitively in a lot of instances. There are some great examples here on CV. So, I tend not to use it since it winds up just confusing people (including me!).

That said, if you wanted to see that sort of thing, I'd look at a density plot, not a QQ plot. The shape is much more evident in density plots.

Not the answer you're looking for? Browse other questions tagged r self-study qq-plot or ask your own question.

224
How to interpret a QQ plot
28
What are good data visualization techniques to compare distributions?
19
How is the kurtosis of a distribution related to the geometry of the density function?
20
Should we teach kurtosis in an applied statistics course? If so, how?
2
Q-Q plot, is this a approx normal distribution?
0
Replicate distribution image kurtosis
1
Sampling from heavy vs light tailed distribution
1
How can I see Kurtosis in a box plot?
1
Standard skew / kurtosis distribution

3
Does the normal probability plot systematically underestimate the mean?
3
Exponential distribution Q-Q plot homework question
7
How to interpret this QQ plot?
0
Why does the line of best fit start near zero given this data?
0
QQ-plot indicates normality of residuals but density plot does not
1
What does a flat qq-plot mean?