Can you run intraclass-correlations with different raters, and different numbers of raters per participant?

I'm trying to run an intraclass-correlation (inter-rater agreement) for personality data I have collected. However, I work with animals and as such the data has been collected over a period of a year or so, I have, in some cases different numbers of raters per subject, and different raters (or more specifically, not all raters have rated all subjects; some raters have done some subjects, other raters have done other subjects (and some have done all)). So, I have 7-9 ratings per subject, with some overlap between raters and subjects, but not always.

Is this possible, and if so which ICC should I use?

Any advice would be gratefully received.

My agreement package in R can calculate ICCs in the presence of missing data.

First, I need to set a random number seed (for reproducibility), install, and load the required packages.

Second, I need to simulate some data that match your description. To do so, I will assume there are 30 total subjects, 20 total raters, and a seven-point ordinal rating scale from 1 to 7. I will simulate the hypothetically complete data where all raters score all subjects. Then I will randomly select a different (and size-varying) subset of raters to retain for each subject.

Third, I can verify the simulation worked as expected by calculating the number of raters that scored each subject and the number of subjects scored by each rater in our "observed" dataset:

As desired, each subject was scored by around 6 raters (between 2 and 9) and each rater scored around 9 subjects (between 4 and 17).

Finally, Ican provide this data to the dim_icc() function, which will calculate different intraclass correlations for dimensional data.

Since, in this example, each rater scored multiple subjects, I can use a two-way ICC model such as Model 2A to capture variation across subjects and raters. We can calculate the reliability of any single rater's scores and the reliability of the average of six raters' scores. We can even get confidence intervals using bootstrap resampling. 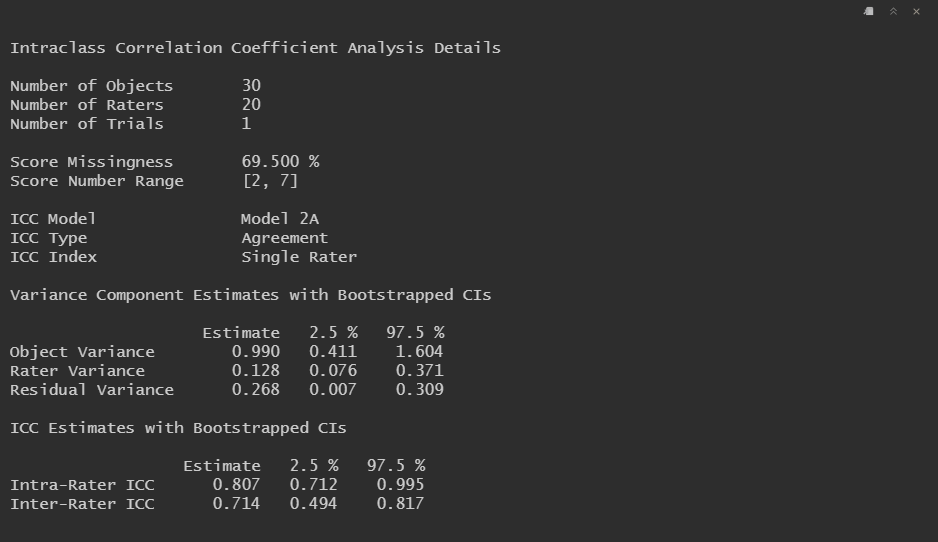 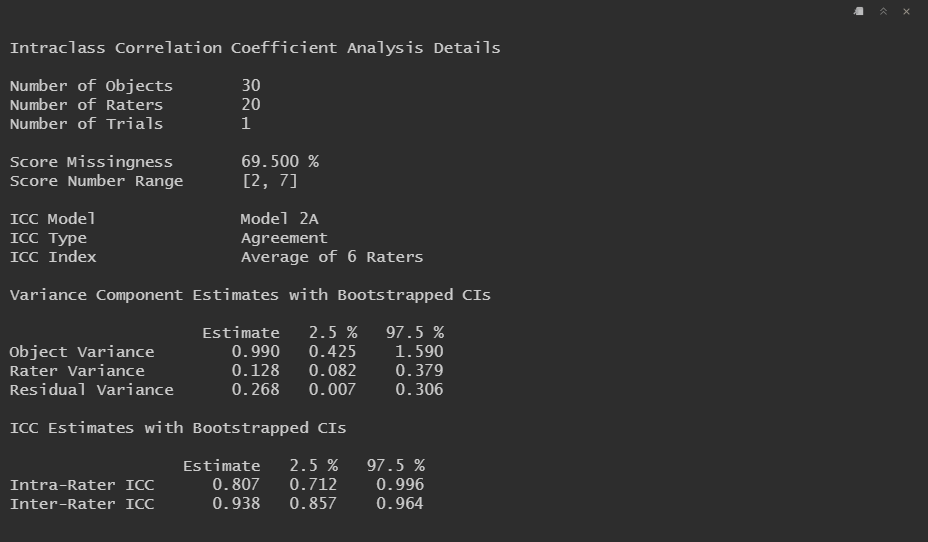 Note that the variance component estimates are identical in both cases (with the confidence intervals only slightly varying due to the stochastic nature of bootstrapping), but the inter-rater ICC estimate is much higher for the average of the six raters' scores. This is due to the Spearman-Brown prophecy formula.

If each subject truly was scored by a different group of raters with minimal overlap, we could use one-way ICC model such as Model 1A. 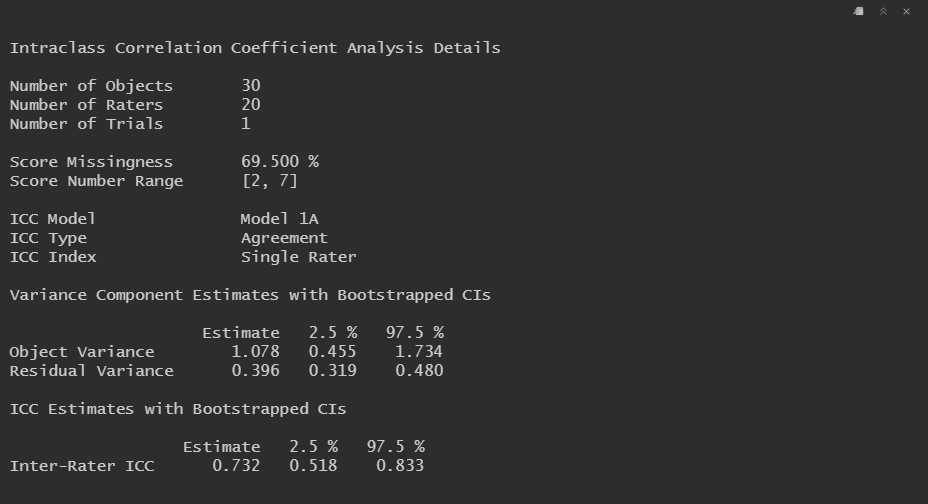 Note that here a variance component for raters wasn't even estimated.

For more on how to select an appropriate ICC formulation, I recommend:

I had the same problem. I think I could solve that by using the formulas informed by Bliese (2000). You basically run an one-way ANOVA using the group as the independent variable. Then use the mean square between (MSB), mean square within (MSW) informed in the ANOVA output. In the calculation of the ICC(1), as you have a varying number of raters, use the average number of raters as k.

Not the answer you're looking for? Browse other questions tagged correlation agreement-statistics intraclass-correlation or ask your own question.

6
Inter-rater reliability using Intra-class correlation with ratings for multiple objects on multiple properties
3
Assumption of additivity for intra-class correlation
8
How to perform inter-rater reliability with multiple raters, different raters per participant, and possible changes over time?
2
Which ICC model to use for computer vs. human agreement
1
interrater-reliability with likert-scale and different raters
7
Intraclass correlation coefficient (ICC) for two raters using a mixed effects model for a design with repeated measurements
3
Inter-rater agreement for non-fully crossed designs
0
How can I use the ICC as a measure for inter-rater agreement on a set of (more or less) correlated items?