Many p-values are equal to 1 after Bonferroni correction; is it normal?

I have behavioral data for 10 animals that I studied at two different times of day, AM and PM. I am looking to see if there is a significant difference in 8 different behaviors at AM vs. PM. I have two sites (LL and WK), so wanted to look at the differences per site and the combined data. So I performed 24 t-tests and got reasonable p-values, mostly indicating no significant difference between the two times.

I then applied Bonferroni's correction factor, to adjust for the repeated t-tests. However, 22/24 of the adjusted p-values now equal one, which seems odd to me. Any ideas about what went wrong or if these adjusted values are correct?

Here is the code I used to calculate the Bonferroni correction factors:

I've attached the data I used, plus a column including the adjusted p-values. 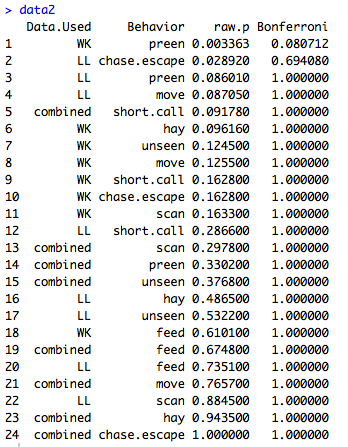 Nothing went wrong. The adjusted p-values are correct. Adjusted $p=1$ simply means no evidence at all for rejecting the null hypothesis.

There seems no reason to use the unmodified Bonferroni correction because it is dominated by Holm's method, which is also valid under arbitrary assumptions.

For your specific experiment, there is so little evidence of real effects that you won't get any significant results even with Holm's method.

Thanks for reading my 1997 JASA paper!

If I had a do-over, I would rephrase my comment that a (single-step) Bonferroni adjusted p-value is not a probability "per se." (And I would no longer use the dreaded "per se." Yecchhhh!)

But the bigger and more important point of my paper is that you can find these adjusted p-values exactly in such a way that accounts for the correlations between the multiple test statistics, assuming the classical linear model. These exact adjusted p-values are in fact probabilities when calculated in single-step fashion; see p. 302 of my JASA paper for the math. (To get the single-step p-values, you need to modify the expression somewhat; see my 1993 Wiley-Interscience book and my SAS book). While I used an enhanced Monte Carlo method to approximate this exact probability, better methods have been developed since; please see Hothorn, T., Bretz, F., and Westfall, P. (2008). Simultaneous Inference in General Parametric Models, Biometrical Journal 50(3), 346–363.

Just to add to @gordon-smyth and @student-t 's answer. Another way to look at it is to adjust the $\alpha$-level yourself instead of adjusting the $p$-values via the p.adjust() function. For the Bonferroni correction this is easy enough. If your $\alpha$ level is $0.05$, then you divide this by the number tests, which then is your new Bonferroni adjusted $\alpha$-level.

If you want to use the Holm-Bonferroni method, you can also do this quickly by hand (see here).

Everything works as expected because Bonferroni could give you adjusted p value greater than one. The R function rounded it off to one because a probability over one makes no sense. This is an example where Bonferroni shows reduction in statistical power.

You may want to try other multiple comparison methods or adjust the significance level.

Not the answer you're looking for? Browse other questions tagged hypothesis-testing t-test p-value multiple-comparisons bonferroni or ask your own question.