Detecting structural breaks in a dataset.

I have some trouble detecting structural breaks in a dataset.

I have tried to figure this out with studentized residual, the thought was that when someone broke the trend and churned it would give a value close to -2. But as you can see from my code, the time-series which I want to recognize as a structural break (y) only has a studentized residual value of -0.43 at the periode where it drops to zero.

I also tried with bfast without luck.

The output would be:

This is the code I used to find structural break:

In principle, the methods in the strucchange package (upon which bfast builds) can be used to detect the patterns you have created here. However, the sample size with 12 observations is very challenging for asymptotic methods as those in strucchange. As long as you only want to detect shifts in a piecewise constant mean (patterns y and z), you are better off with using permutation tests as those implemented in maxstat_test() from the coin package. If you really want to start out from a linear regression model (patterns x and w) you probably need more observations (or very small errors) to have a fair chance of detecting anything. 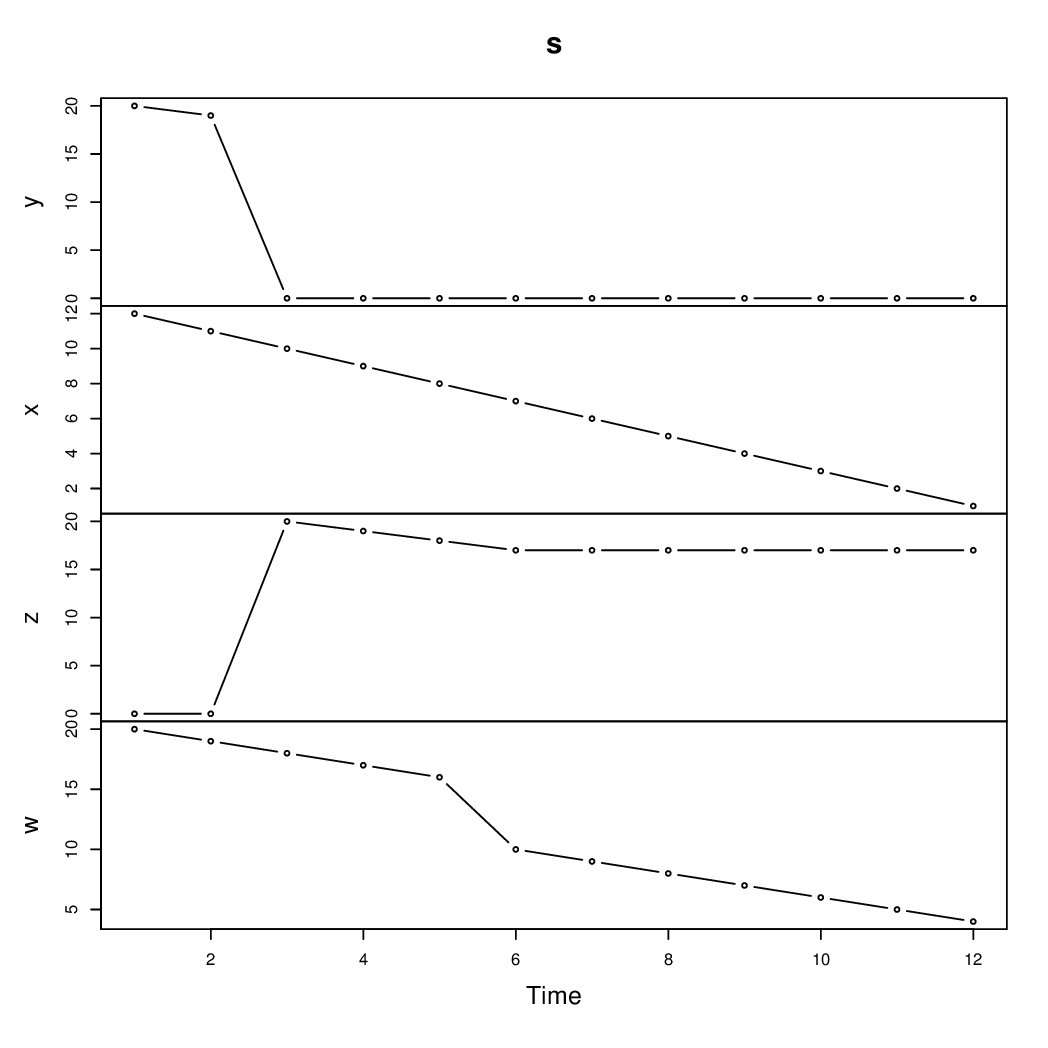 For the two patterns that are essentially shifts in a piecewise (almost) constant mean, we can use maxstat_test() from coin relatively easily. The p-values are found by approximation (i.e., simulating a finite number of permutations):

In both cases the "true" breakpoint is found with a significant p-value (at 5% level). One could also tweak the Fstats() function from strucchange to reveal the same breakpoint; but the asymptotic inference that Fstats() is based on is surely less appropriate than the permutation inference. For a more detailed discussion of the differences between these tests see: Achim Zeileis, Torsten Hothorn (2013). "A Toolbox of Permutation Tests for Structural Change." Statistical Papers, 54(4), 931–954. doi:10.1007/s00362-013-0503-4

For the pattern w where a piecewise linear regression is needed, one could use Fstats() and breakpoints() but estimating two intercepts and two slopes from just 12 observations is really pushing it, especially if the breakpoint between the two segments also should be determined. In this artificial setup without any noise, it can be done but I wouldn't recommend it in practical situations with more noise.

Thus, the true segments/parameters are recovered here. But admittedly with a minimal segment size of h = 4 and no noise there is not much to estimate.

Note also that the ~ time part in the formula means different things for maxstat_test() and breakpoints(). In the latter case, it means that a (piecewise) linear time trend is used. In the former case, it means that a split in a (piecewise) constant mean is searched in the ordering by the time variable. (In the latter case, the ordering is implicit through using a ts time series data.)

Not the answer you're looking for? Browse other questions tagged r time-series structural-change or ask your own question.