box plot in R: Do the outliers count when the quantiles are being determined?

I have a 1 dimensional dataset and I use the boxplot function to make a box plot. Then I can see that I have some outliers.

Do the outliers count when the quantiles are being determined?

Is there a right/wrong way or are both ways correct as long as we are clear about which method has been used? If so, how does R do it?

R -- like many, but not all programs -- mostly uses Tukey's definition* of how to draw a boxplot.

The entire original sample is used to calculate the hinges (where the box-ends are drawn).

Hinges are very similar to the quartiles (you could say they're a particular way to calculate the upper and lower quartiles that differs slightly from the more usual definitions of quartiles -- though there are a number of different definitions of sample quartiles as well; indeed R offers nine distinct quartile calculations, not counting hinges themselves). 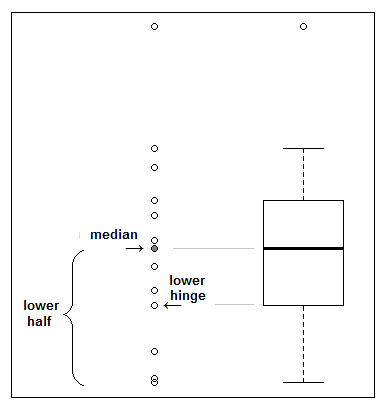 * Or rather, one of them; Tukey gave several definitions, though for present purposes we need only worry about how the calculation of the hinges works; I say mostly because the version with "outliers" would be what Tukey called a schematic plot but they don't do the one with two distinct kinds of "outlier" marks.

Not the answer you're looking for? Browse other questions tagged r data-visualization boxplot or ask your own question.

3
Boxplot interpretation: is it correct that a boxplot is missing a whisker?
3
Box plot with just two values does not have its whiskers in R
3
Detecting outliers along the distribution in a scatter plot
17
What is the basis for the Box and Whisker Plot definition of an outlier?
1
Boxplot only display points
1
Interpreting percentage of an outlier in a box plot
5
What is the defintion of variation in a box plot?
2
Alternative to boxplot when there are many outliers