I am trying to estimate the effect of Universal Primary Education programs on domestic violence in a sample of Sub-Saharan countries. This program has been implemented in a different year in each country (e.g. 1994 in Malawi, 2001 in Tanzania and so on). Thus I am wondering which experimental design is better for this kind of data.

I was thinking about using a Diff-in-Diff but I need a different pre/post dummy for each of the countries of my analysis because the treatment is unique but it has been implemented in each country in a different year. Thus, my idea was to do something like

\begin{gather} Y=\alpha T+\beta\sum_{i=1}^ND_i+\delta\sum_{i=1}^ND_i*T+\epsilon \end{gather} where $T$ is the treatment dummy that is always the same and $D_i$ are the different year dummies. Moreover, I would add country fixed effects to keep constant the cross-country differences.

Is this specification meaningful? Or should I think of something different?

What you are attempting to do is sometimes referred to as staggered difference-in-differences. So you have units which receive a treatment at different points in time. Your specification, $$ y_{it} = \alpha_i + \delta_t + \sum_{k} \gamma_k D_{ik} + \epsilon_{it} $$

would be one way of dealing with this, where $y_{it}$ is the outcome for country $i$ in year $t$, $\alpha_i$ and $\delta_t$ are country and year dummies, and $D_{ik}$ is an indicator which is equal to one for country $i$ adopting the policy in all $k\geq t$ periods. This is similar to the approach taken in Stevenson and Wolfers (2006) in the Quarterly Journal of Economics.

If you are interested in plotting the pre-treatment trends, you can standardize the time dimension as $m$ periods before and $g$ periods after the treatment. In this case you have a certain time window around the adoption of the policy, $(m,...,-3,-2,-1,0,1,2,3,...,g)$ where $0$ is the last pre-treatment period. So your data would look something like, for example, 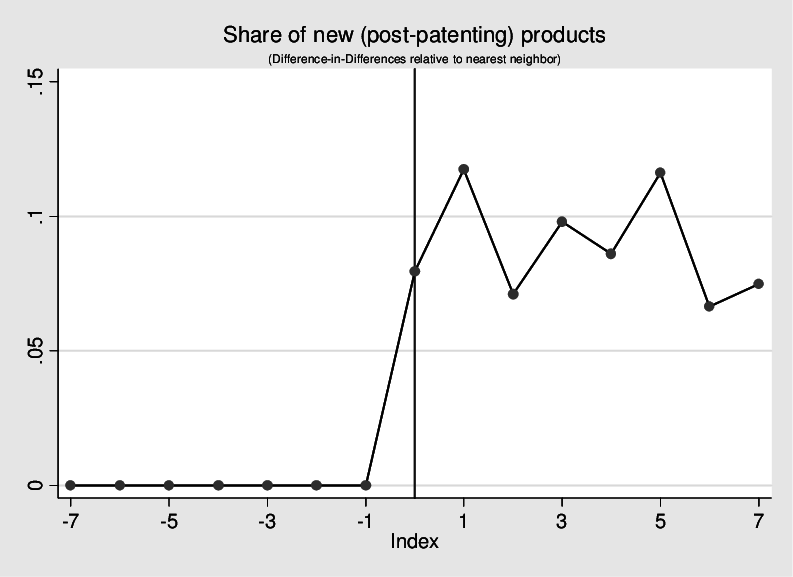 Note though that this is a stylized graph. It would be a bit suspicious if ALL your $\pi_j$ are exactly zero, but ideally you should not see any significant coefficients for the treatment before time $0$ (taking into account the confidence intervals). The $\phi_j$ coefficients will then tell you how long it takes for your treatment to reach its full effect, or whether it persists/fades out after implementation.

Another recent (working) paper which uses staggered diff-in-diff and that you can consult is Gipper et al (2016). Hope this helps!

Not the answer you're looking for? Browse other questions tagged regression econometrics experiment-design difference-in-difference or ask your own question.

5
What regression analysis should I perform on my data and why?
5
Dynamic treatment timing in a panel-DiD framework
0
Difference-in-Differences
3
Diff-in-Diff with multiple treatment groups
3
How to plot the graph or perform a formal test of parallel trends for generalized DiD?