Fat tail? Short tail? Long tail? Where do I go from here?

I am running a linear mixed model with 4 fixed factors and 1 random factor. The response variable is %growth and it has negative values (some of my animals shrunk). The problem I'm having is the residuals are not normally distributed according to the shapiro wilk test. The histogram seems like a normal distribution, but the normal quantile plot has an s-curve. In looking this up, I've found this curve labeled fat tail, short tail, and long tail.

I have tried transforms (log, sqrt, cube root) but nothing seems to make it normal (log doesn't work at all bc of the negative values). My next step would be to try a generalize linear mixed model, but I use JMP and it doesn't offer that functionality yet. Do I have any options aside from learning R?

My n is 304, and I have heard that normality matters less as sample size increases, but I don't think 304 is very large. 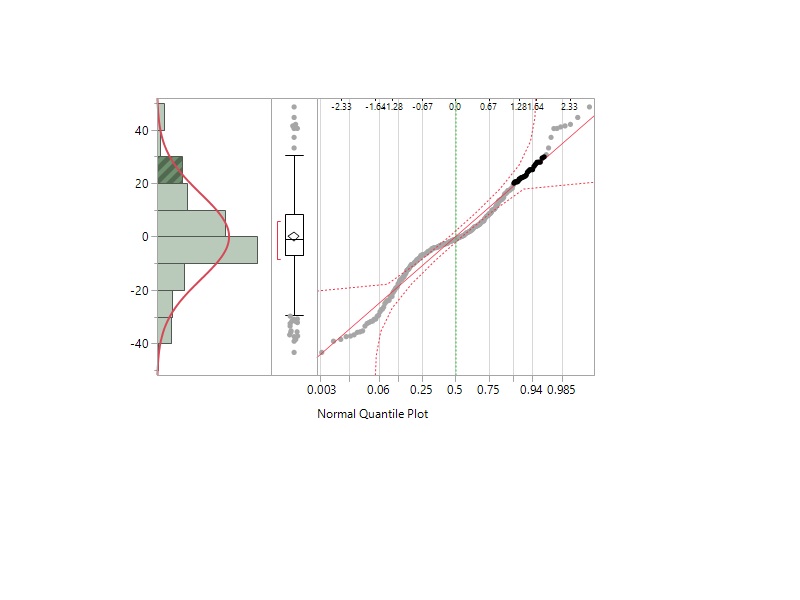 Growth rates must be distributed as some variation of the Cauchy distribution. I have written a series of papers on this. The Cauchy distribution has no mean so it has no variance or covariance. You can find my author page at https://papers.ssrn.com/sol3/cf_dev/AbsByAuth.cfm?per_id=1541471

Start with the paper titled "The distribution of returns," and then switch to the paper on Bayesian methods. Generally speaking, there is no admissible non-Bayesian solution though in specific cases there is a maximum likelihood solution that can be used if a null hypothesis method is required. The Bayesian likelihood function is always minimally sufficient.

You can communicate with me through the address on the author page. Because there is no variance or covariance, ANOVA and ANCOVA are impossible.

EDIT With regard to the comments:

1)If I say it's Cauchy, and therefore rule out ANOVA and ANCOVA, what are my options?

The meaning is very different from OLS, though. OLS is from a convergent process, such as water going down a drain. This can be conceived as a double pendulum problem, and as such has limited predictive capapcity. For example, if you had $y|x$ you could think of $x$ as the upper pendulum and $y$ as the lower pendulum attached to the top pendulum. So, while $y$ is affected by the movement of $x$ it does not mean they are even moving in the same direction with a positive correlation. A pendulum swinging to the left could cause the other pendulum from momentum to swing to the right.

There is a tight linkage between the double pendulum problem, which is the first real observed problem in chaos theory, and regression in this case.

The proper interpretation is that, for example, if $y=1.1x$ then 50% of the time $y$ will be greater than $1.1x$ and fifty percent of the time it will be less than $1.1x$. You may be able to make stronger statements if there are other properties in your system, such as non-negativity.

2) I've read that Cauchy is problematic if residuals are almost normal.

This does not matter. You can find, or even construct, cases where the Cauchy distribution is indistinguishable from a normal distribution. Generally speaking there is no admissible non-Bayesian solution for most standard problems. This is a problem for someone trained only in Frequentist methods, but is not a problem per se. If a null hypothesis is required by the nature of the problem, then the only close solution would be quantile regression or Theil's regression. The problem with either is that, in the above equation, $x_1$ and $x_2$ are not independent, but they are also not correlated.

The question is not Gaussian versus Cauchy by some empirical test, but which should I have from theory. A certain percentage of the time, data drawn from a pure normal distribution will falsify a test of normality through chance alone. While it is sometimes true we do not know the likelihood function and must test for it, sometimes we do. This is a case where we do.

3) Is this really growth rate if I only have initial and final length?

Is there anything similar to anova or ancova? The answer is "it is unclear." If you will notice there is only one scale parameter in the likelihood and this does not depend on the number of variables. The scale parameter is a composite of the separate scale parameters, but it is not clear that there is any way to take advantage of this.

Your Q-Q plot doesn't look like it has a fat tail. I'll show you how a fat tail looks like: 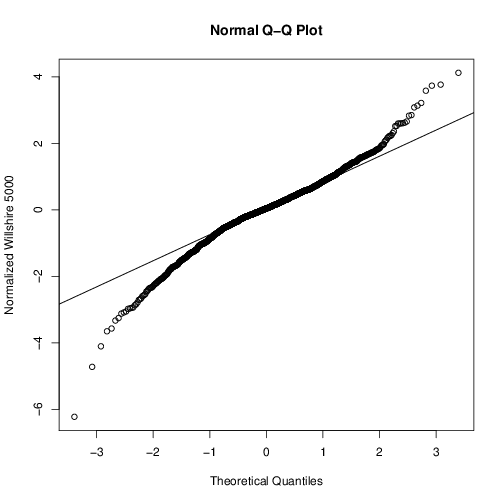 Your tail is like a Victoria Secret's model compared to the above. I wish some of my model residuals had tails like yours has.

It seems that bootstrapping, as suggested by @Tim in comments, might be a good way to proceed. Even if your statistical software doesn't directly support bootstrapping it's not to hard to roll your own. For example, say you have all data for each individual in a single row (species; 3 treatment types; starting and ending length, width, and height; block ID) and you have 304 rows. You set up an index vector of length 304, and for each bootstrap fill it with a random sample with replacement from the integers from 1 to 304. You then take those indexed rows from your full data set for 304 rows total (with some original rows omitted, some taken once, and others 2 or more times). Then do your analysis and store the regression coefficients. Do this 999 times. For each regression coefficient, average the 999 results; then put its values for the 999 repetitions in rank order; the 25th and 975th in order set the 95% confidence limits. Unless your analysis depends heavily on having a balanced design, this should suffice.

This will not work if there is an underlying Cauchy problem, but I'm not convinced that you have this problem with your data set. The Cauchy problem comes from trying to take a ratio of 2 random variables in which you run a risk of dividing by zero or by numbers close to zero. Although this can be a serious issue in the types of economic time series addressed by @DaveHarris in the documents linked from his answer, in your case the lengths, widths and heights are all positive and far from zero so you don't seem to be in that situation. Raw differences between start and finish, or logs of start/finish ratios, should be sufficiently well behaved that you can analyze your data with the bootstrap, which is a well respected way to deal with your type of situation when you can't count on normal distributions of the data of interest.

Not the answer you're looking for? Browse other questions tagged anova normal-distribution ancova fat-tails heavy-tailed or ask your own question.