Post-hoc test for difference in slopes with interaction

I am looking for a robust way test for differences in slopes in a range of data. Here, I am showing R code to be clear about what I am attempting, but I believe that I am looking for a general answer (which I can then implement in R, if it is not available already).

As an example, I am using Edgar Anderson's "iris" data (builtin in R, and available here as a csv) to build a prediction of Petal.Length by Sepal.Width when I can visually see that the Species have different relationships: 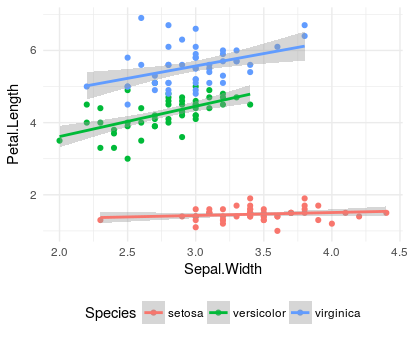 So, I build a linear model with the interaction between Species and Sepal.Width, and can see that there is a significant interaction. In R, the model is built as:

and anova(irisLM) gives the following table:

I can run summary(irisLM) to get the full linear model as well:

Here, the coefficient Sepal.Width:Speciesversicolor is (effectively) testing the null-hypothesis of no difference in the slope for Iris versicolor and Iris setosa. When there are only two species, that is sufficient, but what about in cases like this where I also want to compare versicolor and virginica?

I know that I can change the order of the factor to treat each level as the baseline, but that seems incomplete, unelegant, and does not correct for multiple testing. (Not to mention that it is cumbersome for data with many levels and/or where levels may change from one analysis to the next.)

I have been searching extensively, and I have not found concrete answers. A few places have suggested using the estimates and standard errors to perform t-tests, but I am not sure that is a valid approach. (Further, it is unclear what degrees of freedom should be used for such tests.) I would hope that there would be a formal post-hoc test like Tukey's HSD for this (my understanding is that Tukey does not apply here because it is not a test of means; in any case, R throws an error if I try it with TukeyHSD(aov(irisLM), "Sepal.Width:Species")).

There are two questions that seem near duplicates, but they don't quite address what I want. This question asks something very similar to what I want, but the answers either suggest changing which level is the baseline, or how to work around the interaction term (but not test it directly). This question has very good answers, but they appear to only apply when both predictors are factors. They do not work for me with a continuous variable.

If it helps, here is a version of the coefficient table that estimates the value of each slope/intercept, instead of showing the difference from the baseline:

The lsmeans package does provide for this type of comparison. For the example at hand,

Here is a solution implementing a T-test for each pair-wise comparison in R. Note that it is using 1 less than the smaller sample size in each comparison as the degrees of freedom (which is certainly wrong, but likely conservative) and not correcting for multiple testing (though Bonferroni would be an easy follow up). I am also returning both directions of the comparison for ease of display (and code simplicity), though I recognize that each is just the inverse.

For this answer, I am using R with the packages tidyverse and magrittr to utilize piping and some other nice tools.

First, I am extracting a table of the slope coefficients (by extracting the full coefficient table, limiting to just the rows with slopes, limiting to the columns I want, then cleaning up the interaction term to just display the species for which I want the slope):

From this, I am saving the estimates for the slope and the standard errors to vectors to make them easy to refer to when I do the comparisons:

Then doing something similar to allow me to easily pull sample sizes:

Finally, I then loop through all pairwise comparisons. In each, I calculate the difference in the slopes, the t-statistic, and a p-value (based on my rough degrees of freedom). I return each comparison as a one-row data.frame (technically, a tibble, as it eases some of the next steps). Then, I bind all of the rows together and filter out the intra-species rows.

This works, but it does not seem like the best solution possible. It seems like there should be some more formal test of this phenomenon (as I can't be the first one that wants it).

Not the answer you're looking for? Browse other questions tagged multiple-regression interaction post-hoc or ask your own question.

15
How to obtain the results of a Tukey HSD post-hoc test in a table showing grouped pairs?
8
Testing Slope significance for multiple factor levels in a linear model