Testing whether the variance of a data set is significant

hope someone can help me out with some stats for a data set I have- I originally thought it was easy but I think I'm over complicating everything in my head.

Ok so for example- I'm looking at the body length of dogs. I've taken measurements of 20 individuals of each breed and I've done this for 10 breeds. I now want to see if the measurements I've taken for each breed are a good representative of the actual breed- so I think I want to see if the variance for each breed is significant and then decide overall if all these variances are significant so that I can tell when I compare the breeds if I've actually got means that are representing the breed.

Plotted coefficient of variation against the breeds mean as suggested: 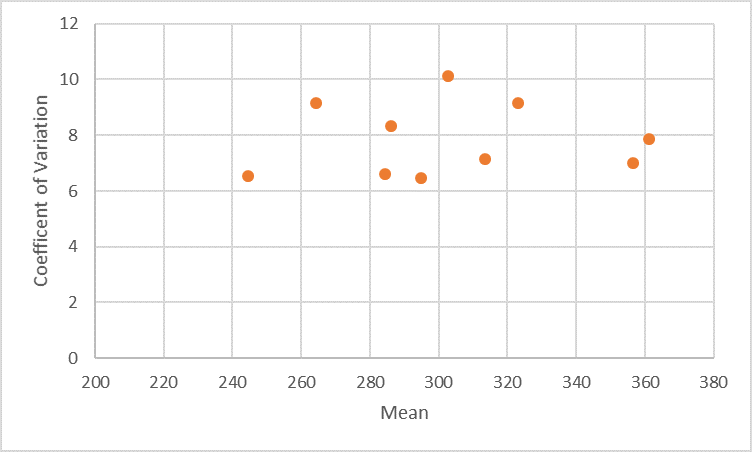 Still confused about how (or if its possible) I can tell if the variance within the breeds is significant. Would performing a stats test on the coefficients of Variance work?

This is impossible based on the sample itself. I understand what you want but it can't be done without knowing something in addition to the sample at hand, something about the entire population (i.e. breed in this case).

For instance, you know what is the average weight of dogs in the population ( for entire breed), then you look at your 10 dogs and their weight is somehow not representative, then you have an issue with the sample. You probably can't use the length measurements either.

Not the answer you're looking for? Browse other questions tagged statistical-significance variance or ask your own question.

0
what can I take from different sample sizes

4
How to tell if something happened in a data set which monitors a value over time
2
Describing the difference between 2 types of variance
5
Analysis of variance not statistically significant… but is there still a pattern to the data?
1
3 test groups, each group with different N of rats, Each rat with different n of D measurements…unsure which test to use to compare
0
what can I take from different sample sizes
0
Correct approach to testing for homogeneity of variance across ~2000 conditional distributions?
1
If you know a normal distribution's population variance, does a sample variance tell you nothing about the sample's mean's confidence interval?