Are Neural Nets a Special Case Of Graphical Models?

In the talk, here at NIPS, they say that:

GANs and VAEs are Graphical Models, just with a particular CPD and cost function. They are bipartite complete graphs.

How can that be explained? I thought that you need probabilities enmeshed in the models, with variables having dependence relationships. In neural nets, they have all sorts of other things like ReLu nodes etc. i.e there are no probability relationships just a series of non linearities alongwith with priors such as regularization or convnet structure.

This seems to be very different view than that is explained at What's the relation between hierarchical models, neural networks, graphical models, bayesian networks? .

If you focus on the generative part, GANs and VAEs are actually mathematically the same object (1), i.e. Gaussian latent variable models, where $z$ is a latent Gaussian random variable pointing to an observed $x$:

The difference is that VAEs are prescribed models that output a random variable $x$ with a probability density, while GANs are likelihood-free implicit models (2) that directly specifies a (deterministic) procedure with which to generate data. 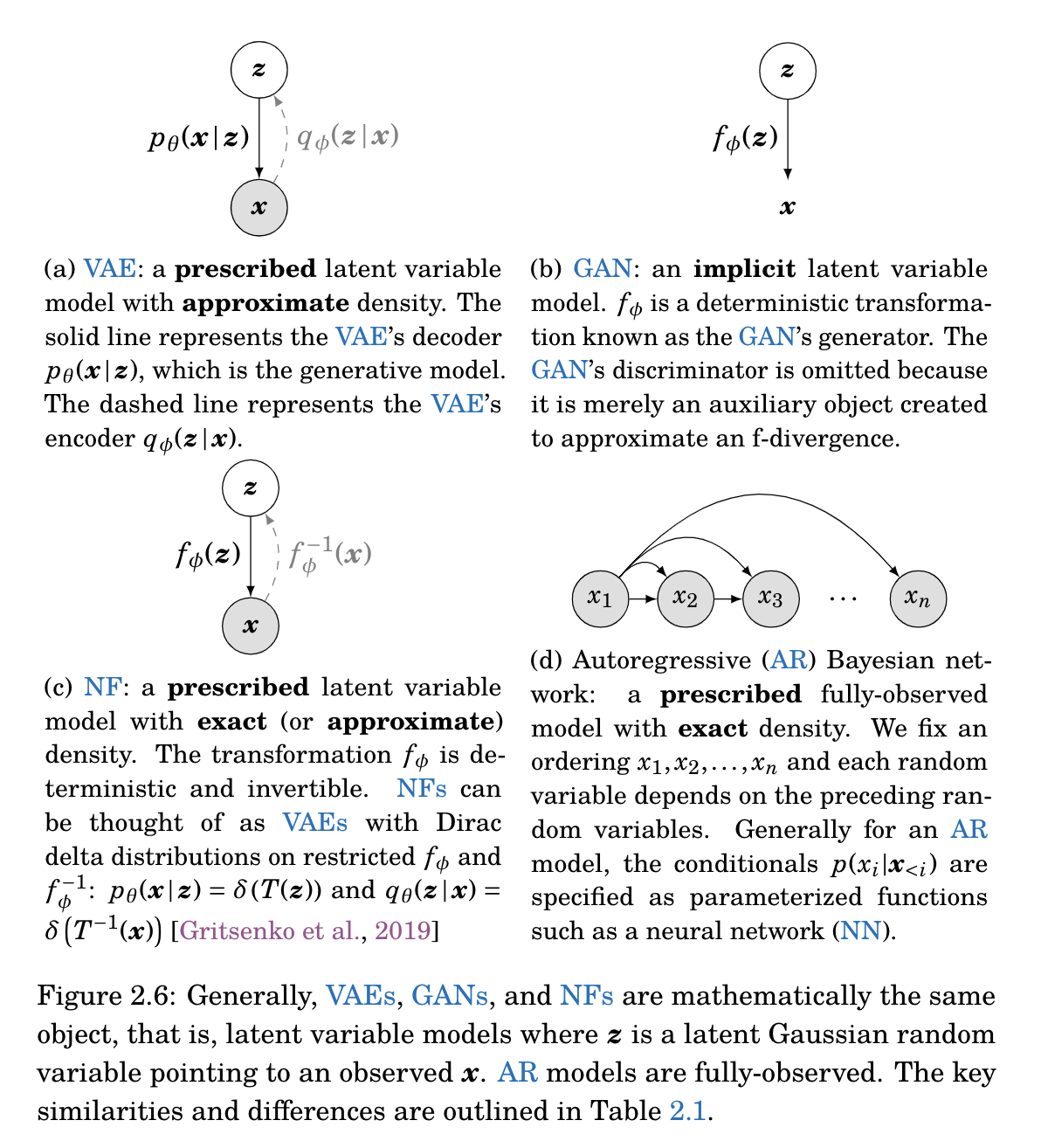 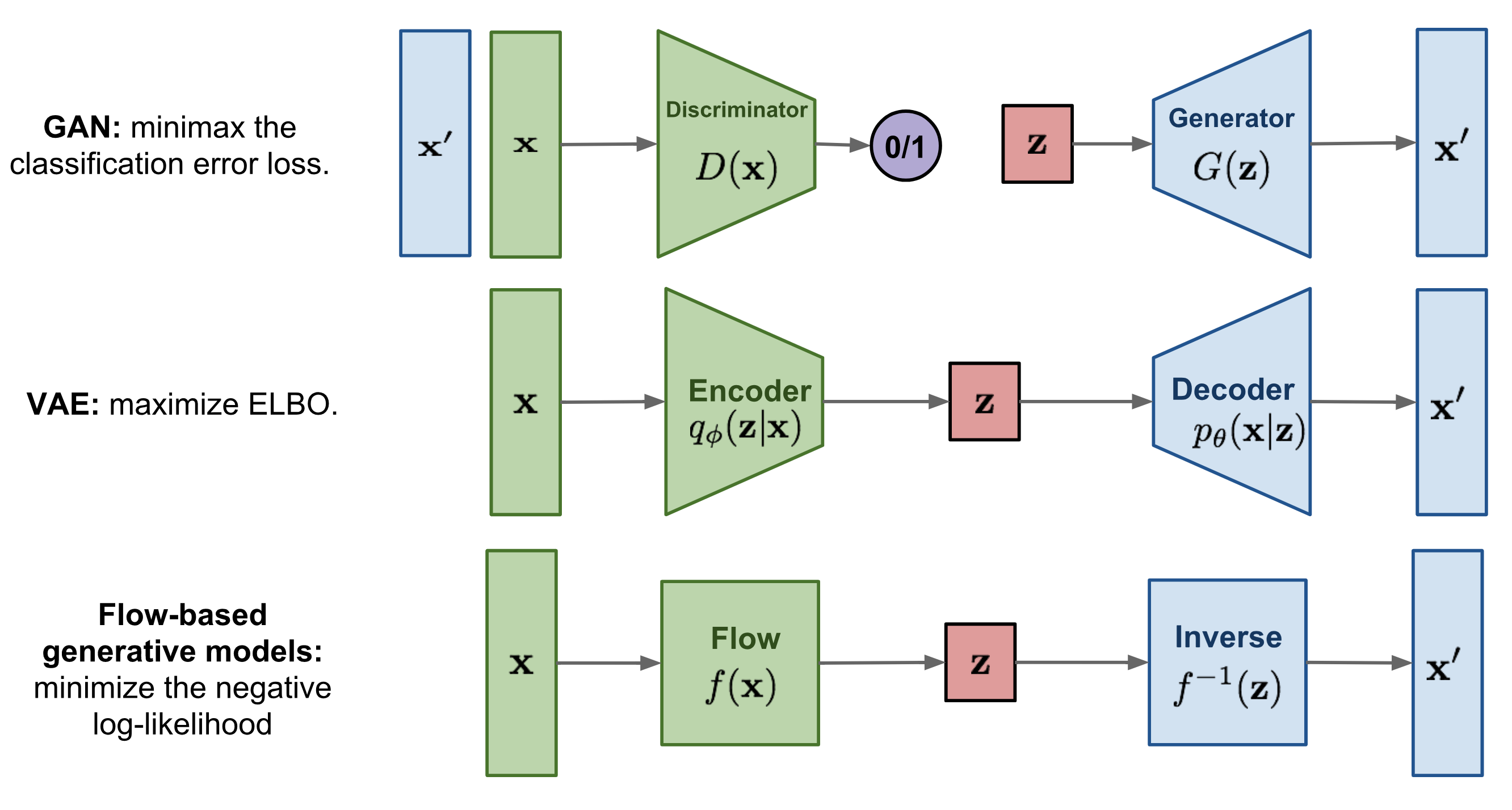 (1): I've linked the relevant timestamp of the video recording of a tutorial (slides here) by Shakir Mohamed and Danilo Rezende from DeepMind at UAI 2017; Ferenc Huszar also explains the equivalence on Reddit. The VAE's graphical model is also explained in Stanford's "CS236 Deep Generative Models" notes.

(2): The distinction between prescribed and implicit models is described in greater detail in "Learning in Implicit Generative Models" by Shakir et al. (2016).

On Unifying Deep Generative Models (Hu et al., 2017) illustrates augmented graphical models that encompass both the GAN generator and discriminator, and an analogous model for the VAE where we assume a perfect discriminator.

You can view a deep neural network as a graphical model, but here, the CPDs are not probabilistic but are deterministic. Consider for example that the input to a neuron is $\vec{x}$ and the output of the neuron is y. In the CPD for this neuron we have, $p(\vec{x},y)=1$, and $p(\vec{x},\hat{y})=0$ for $\hat{y}\neq y$. Refer to the section 10.2.3 of Deep Learning Book for more details.

Not the answer you're looking for? Browse other questions tagged machine-learning neural-networks graphical-model autoencoders gan or ask your own question.

0
Besides convnet and stacked RBMs, are there other noteworthy deep NN models?
11
Are graphical models and Boltzmann machines related mathematically?
61
What is the definition of a "feature map" (aka "activation map") in a convolutional neural network?
4
Can someone explain why Bayesian networks are called "Bayesian"
4
Benchmarking new techniques for Data Mining
4
Neural network: Why can NNs have identical structure in the hidden units and still learn?
5
Why aren't neural networks used with RBF activation functions (or other non-monotonic ones)?
19
Are neural networks consistent estimators?
1
Variational Autoencoders and Probabilistic Graphical Models