Does anyone know what the Inverse Cumulative Distribution Function of Normal Distribution is? Does it have a closed form expression? I did not find any good answer using Google.

There's no closed form expression for the inverse cdf of a normal (a.k.a. the quantile function of a normal). It looks like this: 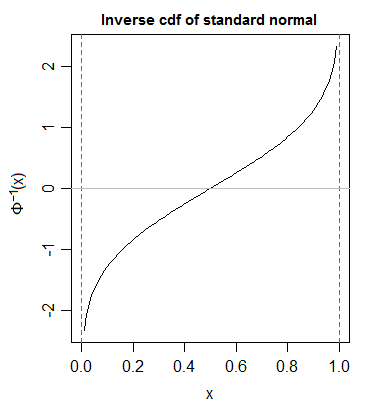 There are various ways to express the function (e.g. as an infinite series or as a continued fraction), and numerous approximations (which is how computers are able to "calculate" it).

Reasonably accurate approximations are tedious to write and not especially enlightening (except in so far as the general forms convey a little insight into common ways of approximating functions you can't easily obtain in closed form).

Not the answer you're looking for? Browse other questions tagged normal-distribution quantiles or ask your own question.

2
What is at x- and y-axis on the Normal Probability Plot and how to calculate it?
0
Formulae to Convert between z Critical Value and Confidence Level
0
How to calculate percentiles given standard deviation, mean and normality
1
How should I inverse of the Normal loss function L(z) to be able to implement this in software?

12
Why the CDF for the Normal Distribution can not be expressed as a closed form function?
5
Independent gamma and normal distribution
3
integral involving the normal CDF
1
Good choice of notation for normal distribution pdf/cdf
0
Inverse-normal CDF approximation in Excel, Python or R
10
Inverse transform sampling - CDF is not invertible