I'm well aware of the advantages of k-fold (and leave-one-out) cross-validation, as well as of the advantages of splitting your training set to create a third holdout 'validation' set, which you use to assess model performance based on choices of hyperparameters, so you can optimise and tune them and pick the best ones to finally be evaluated on the real test set. I've implemented both of these independently on various datasets.

However I'm not exactly sure how to integrate these two processes. I'm certainly aware it can be done (nested cross-validation, I think?), and I have seen people explaining it, but never in enough detail that I have actually understood the particulars of the process.

There are pages with interesting graphics that allude to this process (like this) without being clear on the exact execution of the splits and loops. Here, the fourth one is clearly what I want to be doing, but the process is unclear: 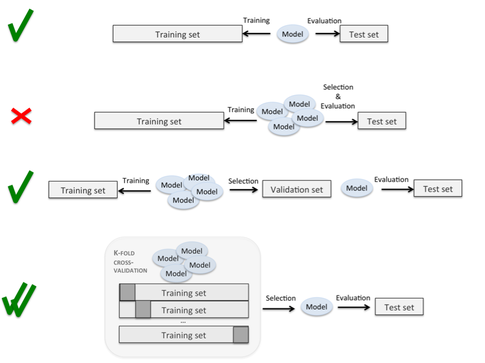 There are previous questions on this site, but while those outline the importance of separating validation sets from test sets, none of them specify the exact procedure by which this should be done.

Is it something like: for each of k folds, treat that fold as a test set, treat a different fold as a validation set, and train on the rest? This seems like you'd have to iterate over the whole dataset k*k times, so that each fold gets used as training, test and validation at least once. Nested cross-validation seems to imply that you do a test/validation split inside each of your k folds, but surely this cannot be enough data to allow for effective parameter tuning, especially when k is high.

Could someone help me by providing a detailed explanation of the loops and splits that allow k-fold cross-validation (such that you can eventually treat every datapoint as a test case) while also performing parameter tuning (such that you do not pre-specify model parameters, and instead choose those that perform best on a separate holdout set)?

Inline with the Dougal answer, you can check the article from D. Krstajic et al. "Cross-validation pitfalls when selecting and assessing regression and classification models", 2014 (doi: 10.1186/1758-2946-6-10 https://www.researchgate.net/publication/261217711_Cross-validation_pitfalls_when_selecting_and_assessing_regression_and_classification_models). There they use nested cross validation for model assessment and grid search cross-validation to select the best features and hyperparameters to employ in the final selected model. Basically they present different algorithms to apply cross-validation with repetitions and also using the nested technique, which aim to provide better error estimates. In the end they elaborate on the experiments done employing the different algorithms for model assessment and selection. As mentioned by the authors in the Discussion section of the article: "As far as we are aware, nested cross-validation is the best non-parametric approach for model assessment when cross-validation is used for model selection.". I could provide you with more information but after reading the article I think you will get a good insight on how to perform grid search cross validation properly and other important aspects associated with these methods.

Not the answer you're looking for? Browse other questions tagged machine-learning cross-validation hyperparameter optimization or ask your own question.

446
What is the difference between test set and validation set?
16
Grid search on k-fold cross validation
0
How important is the absolute size of test set while having few data points?