It goes on to suggest that in such a case we should use the Generalised Likelihood Ratio test. Doing it this way tells us to reject the null at level $\alpha$ if $|\overline{X}-\mu_{0}|>z_{\alpha/2}/\sqrt{n}$.

My confusion is the following. After doing it the first way, we might not have a UMP test but we still have a test nonetheless... What's the point in going on to do the Generalised Likelihood Ratio test if that's normally not even optimal? Assuming there is an explanation for this, if I had to pick one method at the start of doing this question, how should I know whether to choose the Generalised Likelihood Ratio test instead of the normal UMP stuff, without going through both methods -- is there a way to tell immediately which will be better?

I made a small R plot of power levels of each test. Red and blue are one-tailed and dotted black is two-tailed one. Dotted green is significance level $\alpha = 0.05$, $\mu_0 = 0$. 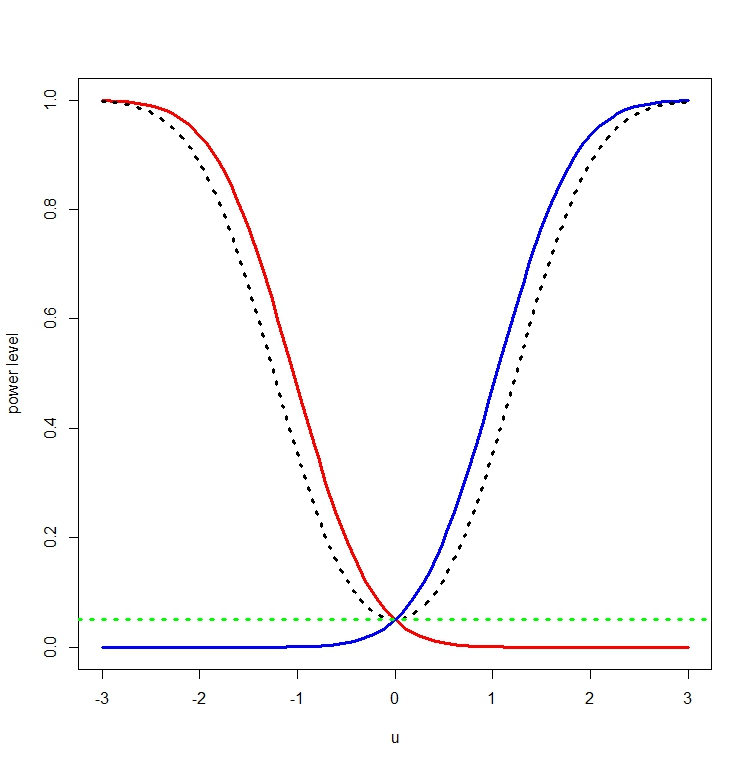 Not the answer you're looking for? Browse other questions tagged self-study hypothesis-testing or ask your own question.

2
Proving a hypothesis test is not a UMP test