I am using a basic diff-in-diff strategy and have a couple of questions regarding the common trends assumption.

For your first point, plotting the average of the outcome for the treatment and control group over time would be the right thing to do in order to see the unconditional evolution of the outcomes in both groups over time. Your statement that you are essentially using between player variation is not correct though. When using difference-in-differences (DiD) you are essentially comparing the group averages. In a simple setting with one pre- and one post-treatment period you can compute the DiD coefficient as $$ \delta_{did} = \left[ E(y_{it}|g=1,t=1)-E(y_{it}|g=1,t=0) \right] - \left[ E(y_{it}|g=0,t=1)-E(y_{it}|g=0,t=0) \right] $$ where $g=1$ is the treatment group, and $t=1$ is the post-treatment period (see here for further explanation). So given that the computation of the treatment effect ultimately happens at the group level, plotting the group averages over time is a good indication for whether the parallel trends assumption holds.

For your second question, doing the procedure in the answer you linked is actually very similar to including placebo treatments. Suppose you have time periods $t = 1, 2,...,k,...,T$ periods where the treatment happens between $k$ and $k+1$ (so time $k$ is your last pre-treatment period). In your setting, you could run the following regression: $$ y_{it} = \text{individual Fe}_i + \text{time FE}_t + \sum_{j\neq k} \delta_j \left( \text{treatmentgroup}_i \cdot I(t=j) \right) + X'\gamma + \epsilon_t $$

i.e. you are interacting the treatment group indicator with time dummies for all periods except for period $k$ (because you need to leave one interaction out as otherwise there will be perfect multicollinearity) which are the $I(\cdot)$ terms in the regression equation.

Then all the $\delta_j$ with $j<k$ are placebo tests for whether the treatment had an effect on the outcome between the two groups. This should not happen because if the treatment has an effect before it even occurs, then this casts doubts on the parallel trends assumption. Plotting these coefficients is basically the "conditional" outcome distribution plot as compared to plotting the unconditional outcome evolution over time as discussed for point 1.
The nice thing is that the $\delta_j$ coefficients with $j>k$ then show you how the treatment effect evolves over time, i.e. how long it takes to fade away or whether it is persistent. An example of how such a coefficient plot would look like is shown below. There is a nice command available in Stata (and I think also in R) called coefplot which does this for you. 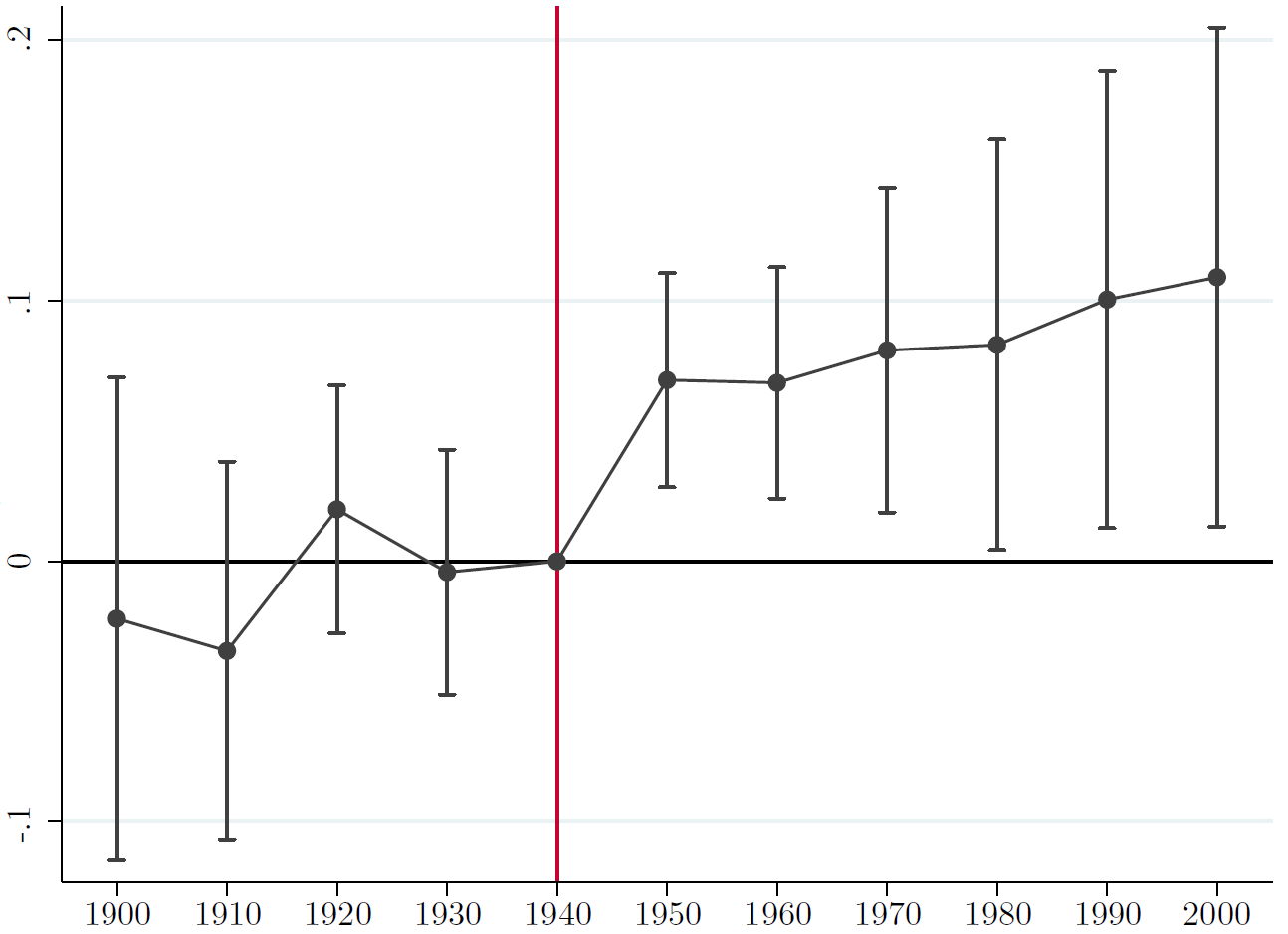 Here the omitted time period is 1940 which is the last pre-treatment period). None of the coefficients before are statistically significant and afterwards you see a permanent effect of the treatment (in this particular case).

Not the answer you're looking for? Browse other questions tagged econometrics difference-in-difference or ask your own question.

52
What is difference-in-differences?
21
Difference in Difference method: how to test for assumption of common trend between treatment and control group?
0
Household fixed effects with cross-sectional data