Prediction of survival times in Cox proportional hazard regression model has been discussed here. In R, survfit::survival using the newdata argument gives a vector of estimated survival probabilities with a confidence interval.

The mathematical expression for a prediction is

where $\hat{h}_0(t)$ the estimated baseline hazard and $\beta$ the Cox coefficient (for details, see link above). My question is how to find the mathematical expression for standard prediction error and prediction intervals for $\hat{h}_i(t)$.

R apparently knows a solution for this in its survfit function. I would like to understand how this works. I considered some survival analysis references but did not find an answer to this question. Here is an example: 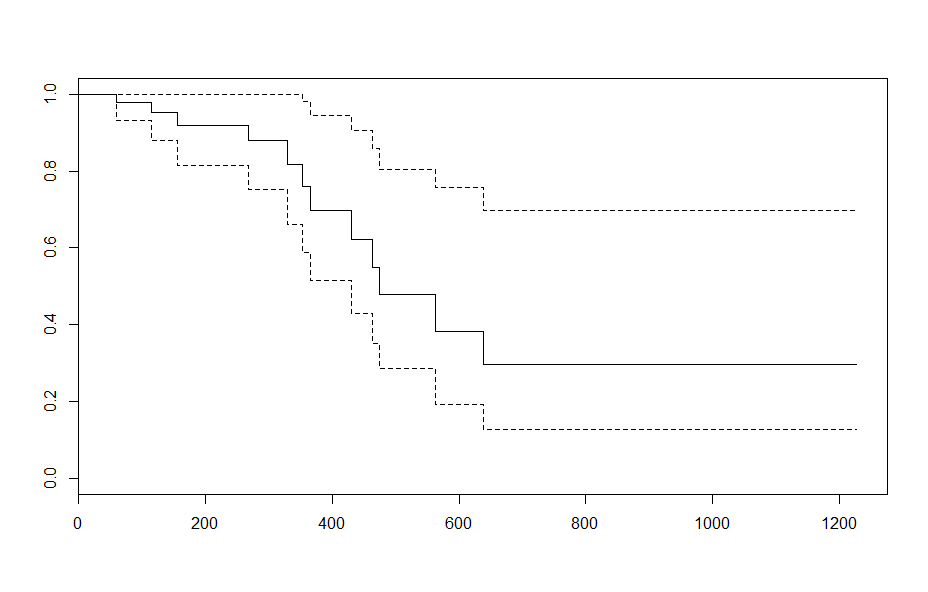 It's perhaps useful to note in your example that when age is taken to be the empirical mean, there is no difference in the plot.survfit output: e.g. plot(survfit(fit, newdata = data.frame(age=mean(ovarian$age)))) and plot(survfit(fit)) produce the same results. This is because the cox model using the hazard ratio to describe differences in survival between ovarian cancer patients of varying ages.

The survivor function is related to the hazard via:

or, according to the cox model specification:

If this is confusing it is easier to think of age as centered and scaled, $S_0$ is the unstratified survivor function, which does not vary based on $X$.

That means that the issue of calculating the standard error for the "scaled" kaplan meier is just a delta method treating the survival curve and the coefficients as independent.

4
Extrapolating the effect of covariable changes in Cox proportional hazards models
1
Calculate c-hat from coxph model
1
How does time factor into Cox regression or a Cox proportional hazards model?
3
Why are baseline hazard functions after Cox PH regression different in Stata and R
2
How to estimate full distributions in Cox Proportional Hazard model?
0
Would you used prediction from Cox or stratified KM for drawing survival curves and testing them?
1
Closed form expression for survfit function used in R (Cox proportional hazard survival model)
1
How to fit parametric distribution to baseline hazard in cox PH model
0
Extended Weibull-Cox model survival function